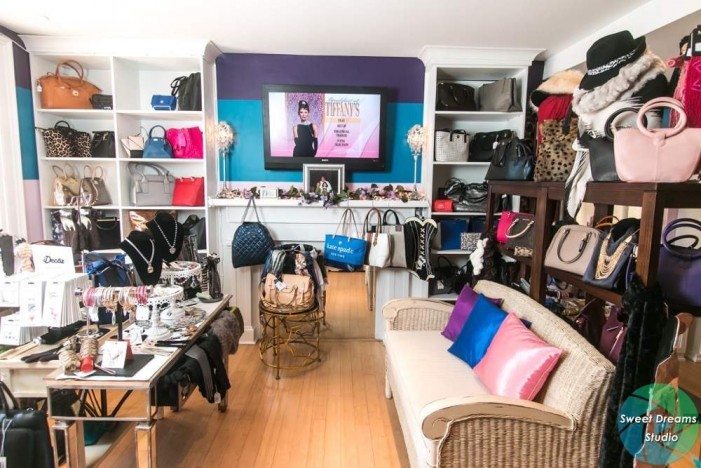 What started out as a small charity to honor her husband’s wishes has been carried out to a non-profit business with plans to expand, emails country-wide and an appearance on national television.

The pain of losing her husband five years ago lingers for Marisa Spagnoletti of Morristown, but six months ago she found a way to channel her loss by opening a non-profit boutique to raise money for various charities such at the P.G. Chambers School in Cedar Knolls. Spagnoletti opened Lucy’s Gift boutique in Morristown in Oct. 2015 and donates 100 percent of the proceeds to honor her late husband Maurice Spagnoletti, a prominent New Jersey banker tragically killed in June 2011, while working in San Juan, Puerto Rico.

As the founder of Lucy’s Gift, as well as the Maurice J. Spagnoletti Foundation (MJSF) in Jan. 2015, the former Florham Park widow has made it her mission to help children in need, victims of crime and honor those who serve and protect others.

Named after their 10-year old daughter, Lucy, Spagnoletti says “Lucy’s Gift is our gift back to the world. It’s just what I wanted to do. It has grown beyond my dreams. I don’t have a website or a Facebook page. I have emails from people all over the country,” and plans to open a second boutique in a “major retail strip mall.”

With a background in sales marketing-brand management, Spagnoletti had worked as a marketing director for Crowe Horwath accounting firm in New York for 13 years, but when her husband was killed, her world changed.

Her business “started haphazardly” because of her husband’s death. It began from helping a small charity and blossomed into a non-profit business.

Maurice had been good friends with their daughter’s doctor, John Connor. It was through that friendship that Maurice came to support the Children of China Pediatric Foundation (CCPF), a charity Dr. Connor supports by performing free surgeries for orphans.

“When my husband was murdered my daughter was very sick,” explains Spagnoletti. “The day after he was buried, we met Dr. Connor in Morristown” to take care of Lucy who has been faced with health issues.

“Upon our return to NJ, Dr. Connor was there and will always be there for us,” Spagnoletti says. “I told Dr. Connor I would keep my husband’s promise” as he labeled the doctor their ‘hero.’

Instead of taking money for Lucy from those who sent donations after her tragic loss, Spagnoletti directed that donations be sent to the CCPF in her husband’s memory.

As donations increased, CCPF opened a rehabilitation training program for chronically disabled and post-surgical orphans in his honor – the Maurice Journey of love support and hope J. Spagnoletti Rehabilitation Program. After three years, when she got back on her feet, Spagnoletti supported these efforts by holding small handbag auctions.

In 2012, “I started doing handbag events; women in large numbers started buying handbags,” she says. By 2014, this grew to a sold out crowd. This led to an annual event in June, raising tens of thousands of dollars for charity.

After setting enough money aside, Spagnoletti decided to open Lucy’s Gift to sell handbags on a regular basis for charity.

“My idea for selling handbags for charity has exploded,” says Spagnoletti. “I put the seed money in for the boutique,” in hopes to get money back to cover her salary and health insurance. After that, all proceeds will go toward helping others.

“I don’t have wealth,” explains Spagnoletti. “I created a business where all the net profits will go to the foundation, which go to our charities.”

Inside her boutique, Spagnoletti decorated using the colors of pink, blue and purple. She explains the pink represents children in need; blue for the victims of crime; and purple for the purple heart.

Through her foundation, MJSF has expanding its charity to children with special needs at P.G. Chambers School in Cedar Knolls to support children in need; is helping victims of crime by supporting domestic violence and sexual assault safe houses such as SAFE in Hunterdon; and aid charities that support the Federal Bureau of Investigation, whose agents – and families – “inspire Marisa with their heroic efforts to protect us domestically,” as explained in the MJSF mission statement.

“When you buy something, you want to know where your money is going,” she explains.

Spagnoletti selected P.G. Chambers as a charity recipient after meeting one of the mothers who sends both of her kids who are in wheelchairs to the school, which provides the most comprehensive education and therapy programs for children with disabilities.

Out of the 35 volunteers at MJSF, Rossi became her eighth volunteer. “She started coming to my house; we became friends.” Spagnoletti honored Rossi in 2013 when she presented her with the Maurice Spagnoletti Foundation Caregiver Award. “Annabella is a role model to me.”

Every year, Spagnoletti presents the caregiver award to an individual, a teacher, mother or nurse. In June 2015, she gave the award to a woman named Tiffany who created a park for disabled children near the Jets Training Facility. Tiffany’s daughter also attends the P.G. Chambers School.

Spagnoletti visited SAFE in Hunterdon about 18 months ago, a women’s domestic violence shelter that she also supports through charity. She met Karen Carbonello, executive director of SAFE in Hunterdon, and learned how she is trying to get funding for a new addition to help even more victims. Since her visit, Spagnoletti is undergoing training on how to help victims in which current statistics say one in every four is a victim of sexual assault.

“All of us working together, we will end violence someday,” says Spagnoletti.

Lucy’s Gift specializes in mostly handbags, and jewelry. Featured are 200 handbags on display varying in color, price and function, from popular name brands like Gucci, authentic lines, vegan or fake leather to unheard labels. Prices of bags range from $50 to $2,000.

“Handbags are my life,” she says. “The sky is the limit for us; we even carry men’s wallets,” and bags for men. “Within two months, we were able to triple our inventory.”

At Lucy’s Gift, customers can find unique costume jewelry pieces and accesories, ranging from $18 to $350, as well as unique items such as a wine tote, her number one selling item she found in a Texas boutique.

Spagnoletti says “I travel the country and find really neat boutiques.” It’s those rare items she brings back to sell for charity at her store, such as a little mirror that attaches to an Iphone.

“When you come to my boutique, everything is sacred,” says Spagnoletti. “Our dream is to bring luxury to all women. I grew up lower income; I didn’t have money to spend. I always dreamed I’d be able to provide fashion to everyone.”

Instead of a bow or ribbon, every bag or purchase is adorned with a barrette.

“I will not spend money on ribbons or bows,” says Spagnoletti. “People don’t have time to wrap.”

To her surprise, Spagnoletti’s mission is taking off. Concert-singer Naomi Miller, who was singing in Italian on the streets in Morristown, attended her grand opening; Spagnoletti has been getting emails of support from around the country; and she recently appeared on the NBC Today Show with Al Roker.

“After five years, I’m finding peace. My husband was brutally assassinated. Honoring him was my life mission. The FBI is still investigating the case, she adds.”

A prominent banker for Doral Financial, Maurice was shot and killed at the age of 57 by unknown assailants, June 15, 2011, while sitting in his car in traffic on the highway. Employed with the company for just one year, he had been assigned to work in Puerto Rico in Jan. 2011, says Spagnoletti.

“Justice is coming I believe that. The people who killed my husband will be brought to justice. We seek justice for all. Hope is something we have and something we have to work for. Hope with positive action prevails. The men and women I’ve come to know are beyond extraordinary; they are the real heroes. ”

Part of Spagnoletti’s mission is to put an end to violence.

“My husband was everything to me,” says Spagnoletti. “You don’t heal from violence. It is prevention, awareness and treatment that will lead to end violence. In my very small way I’m going to make an impact. It’s my mission to end violence and I will. I want my husband’s memory honored. Nothing brings my husband back; my daughter needed her father.”

She says, “My husband died a hero. Heroes take many sizes, shapes and forms.”

Through MJSF, Spagnoletti plans to award a $1,500 Future Hero scholarship to a, junior college student in need from Morris County who aspires a career in preventing or stopping violence. Eric Mohberg, whose fiancé was brutally murdered 26 years ago, joined her MJSF board and is helping her create the scholarship.

At last year’s annual Handbag Auction held Sat., June 20, at the Hanover Manor in East Hanover, $30,000 was raised for the charities. Participants paid $75 for all “you can eat,” dancing, raffles, silent auction of handbags and other items, and presentations by charity organizations.

Besides helping others through charity, Spagnoletti’s says her anger and loss needs to be “rechallenged” so she provides a healthy environment for her daughter. She explains, “I can only focus on positive so she can grow up and be positive.”

“It’s amazing what could be done for the memory of one hero. Through all of this I’m really finding peace. I was so low and so sad, but now I’m back. If I’m working 24 hours a day, it’s not work, it’s what I love to do. I know I never let him down. I feel my husband smiling when I can do things like this. I do my little part in helping them; every year I feel like I’m doing more.”

On her boutique wall hangs a poem titled “Life Does Not Frighten Me At All.” A girl that Spagnoletti met one year ago at P.G. Chambers School read her that poem, so she framed it. “Honestly they teach me more,” she says. Since then, Spagnoletti has adopted a class there and “I go and visit her. Nothing frightens this little girl who has all these issues. I would sell my life for her.”

Some of the kids there “are seriously disabled; you need to have a lot of patience.” With that need, Spagnoletti has come up with a program in which companies pay people to volunteer their time to help out.

“Corporations can give not to the foundation, but to the P.G. Chambers School. For that donation, we will train that staff. Let’s get people to commit to volunteer work. I pay someone $12 an hour to come with me to volunteer.”

As a newly created source of revenue for her boutique, Spagnoletti recently started Lucy’s Gift Treasure Chest, in which she provides non-profits that have budgets with an item for a tricky tray or auction at a fair price. While marketing her items, Spagnoletti can make a small profit which goes back to charity.

Her idea came about after a church asked her for a donation, so she donated a handbag for a tricky tray. “We have to stop saying no,” says Spagnoletti. “We need to think out of the box.”