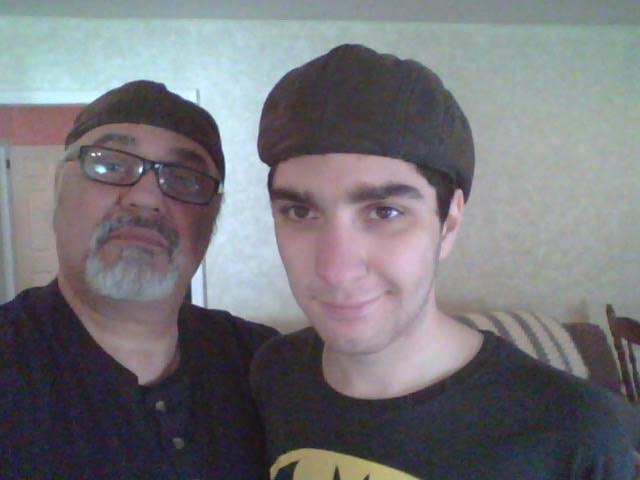 It was at a birthday party when Tom and Carol Corea of East Hanover realized their child, TJ (Thomas Joseph), was not like others.

“Even for a one-year-old, he couldn’t do what others did,” Tom said. “He was like a deer in headlights. He didn’t reach any milestones. The kid couldn’t do anything; he had no concept of playing with a toy.”

Tom explained that the knowledge about autism, back in the late 1990, was a “thimbleful” compared to what it is today; and he and his wife were trying everything with the state and system.

It was also rare in the late 1990s for a guy to be an “at home dad.” Before TJ was born, Tom and Carol had made that decision because Tom was drumming with a band “Bad Attitude” and in 1998 they were signed to a recording contract.

Tom loved taking care of TJ and balancing fatherhood with a career, as he was able to stay home during the day and Carol would watch over TJ at night.

By the time TJ was three years old, he was sent to a pre-K handicap class. TJ was so angry he was biting teachers and banging his head against walls. Tom had to go to school with him every day until they got armed guards and put a crash helmet on him. At the end of the school year, Tom was told that TJ could no longer go to the pre-school. “They couldn’t deal with him at all,” Tom said.

TJ also had a seizure disorder and throughout the years has had more than 100 grand mal seizures.

Tom continued his music career in order to be at home close to TJ during the day. In June of 2002 he launched his home recording studio “Babyfishmouth.” He invited his musician friends to record at the studio and by December they released a CD of Christmas music. These CDs became a tradition, and over the years Tom released 13 compilations of holiday favorites.

At two weeks shy of TJ’s fourth birthday, Tom and Carol enrolled him in the preschool program at the Allegro Autism School in Cedar Knolls. TJ started to move forward, but his behavior was still a big issue. TJ still wasn’t able to talk, so the only thing he could do was get mad and frustrated.

But on a positive note, with TJ in school, it allowed Tom some free time and he happily took a part-time position teaching drums at Raritan Music Center. He said, “Over time, I moved from private lessons to working with infants to preschoolers in a group called Circle Time Live where we perform children’s songs in an interactive format, a job that I still enjoy doing today.”

Tom and Carol’s second child, Jesse, was born in 2004, and in time Tom was able to volunteer in Jesse’s school, helping out with the theatre program while still attending to the life led needs of TJ.

After 10 years at Allegro, at 13-years-old TJ was sent to Developmental Learning Center (DLC) in Warren, which is technically a public school for autistic kids. TJ is still there at 19 and will be there for another two years.

At 19, TJ is functioning on the level of a two- or three-year-old. Tom said, “It’s very routine-oriented. He’s very difficult to deal with. You have to know all the quirks or he loses it. It’s a good 40 or 50 percent better than it has been, but you have to keep in mind, he’s constantly on the edge of getting mad.”

Currently TJ is on two drugs for seizures, one of the two is also an anti-psychotic; and another anti-psychotic to keep behavior in check. Though sometimes TJ’s speech is very clear, most often his speech is that of a person who had a stroke, according to Tom. “He doesn’t know how to get the words out of his head,” Tom said.

It was Dr. Orrin Devinsky, who has practices in NYC and New Jersey, and visits St. Barnabas in Livingston, who put TJ on the medications. And thanks to Devinsky, TJ has been seizure-free for three years and has discovered a love for dance.

“He has all his favorite songs,” Tom said. “He loves Pitbull, Bruno Mars. When you go to any social event, he’ll dance for hours.” Tom paused, smiled, and added, enthusiastically, “That’s his life.”