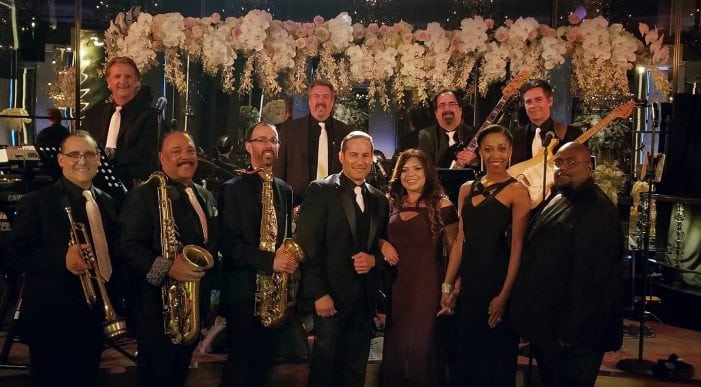 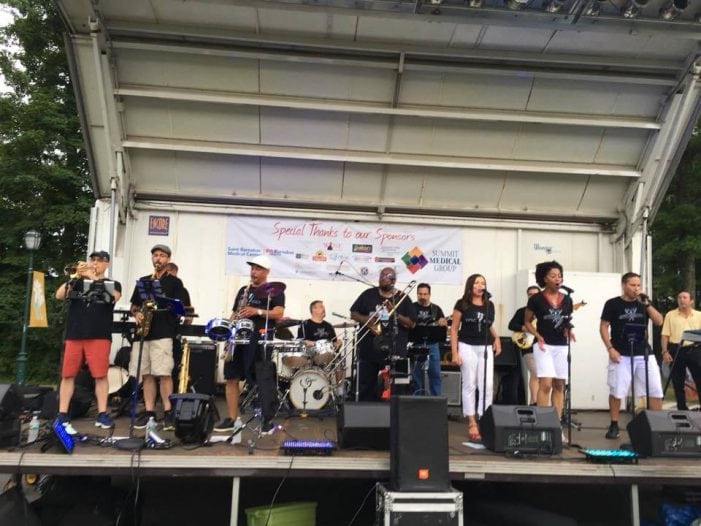 By Cheryl Conway
Thousands came out to the Oval in Livingston on Wednesday, July 4, to celebrate Independence Day and enjoy music performed live by the EPICSOUL Band.
July 4th at the Oval is always a great time for families, friends and neighbors to celebrate Independence Day. This year, it was extra special when the town welcomed the EPICSOUL Band to the main stage at 7:45 p.m. to 9:15 p.m., just prior to fireworks finale. Their performance was sponsored by Saint Barnabas Medical Center.
EPICSOUL, lead by Livingston resident Joe Burach, is an 11 piece R&B and Soul band featuring two male and two female singers and a dynamic horn section. Burach, a Berklee College of Music alumni, leads a talented group that includes musicians who have toured with Marc Anthony, Jennifer Lopez, Alicia Keys, Sting & the Police and Jay and The Americans. 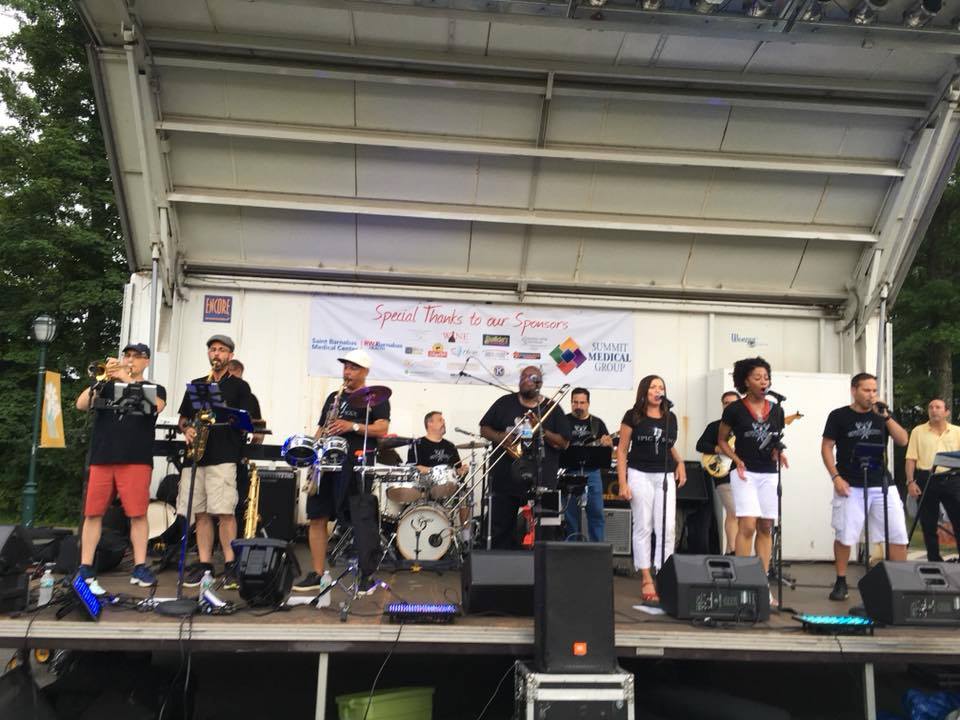 Livingston residents also recognized the band’s bass player, Livingston High School’s music technology teacher Amedeo Ciminnisi who has played with South Side Johnny and the Asbury Jukes.
EPIC SOUL entertains crowds with classic soul hits, Motown medleys, pop and dance tunes that get crowds off their feet. What the band is best known for is surprising audiences with songs they knew and loved and haven’t heard in years. The EPICSOUL Band has and continues to perform at Harrah’s & the Golden Nugget in Atlantic City, Giants Metlife Stadium in East Rutherford, Prudential Center in Newark, Cove Heaven and Paradise Stream Entertainment Resorts in the Poconos, corporate events, and weddings throughout the tri-state area. Most recently the band performed in the Rainbow Room at the
“top of the rock” at Rockefeller Center NBC Studios in New York City.
“We had such a great time performing in the Beer Garden at last year’s July 4th celebration that we were thrilled to be asked to perform on the main stage this year,” said Burach, adding that he could not wait “to perform for all of our friends and neighbors in town.”
Following the performance, Burach was pleased with the turnout and support. “We had so much fun and really enjoyed the evening!” he said, of the crowd “jam packed with all ages, everyone dancing and taking pictures of the band. “All he members of the band were saying this was the best 4th of July Gig that they ever did!” he added. “So many people approached the band for business cards and info and had wonderful compliments for us.
“It really was a fantastic evening for us!” he continued. “They have already asked us to come back next summer for their summer concert series.”
Check out the EPICSOUL Band atwww.epicsoulband.com or onfacebook.com/epicsoulband
Other band members include: Chris Alfinez of Ridgefield Park, lead vocals; Lisel Fundichely-Cox of Bayonne, lead vocals; Jatun Thomas of Norristown, vocals; Robert Mcmurray of East Orange, vocals/ trombone; Amedeo Ciminnisi of Nutley, bass; George Tuzzeo
of Paramus, keyboards; Matt Jardim of Stirling, guitar; Joe Cunningham of Boonton, sax/flute. The group has been playing together for eight years.
Burach, who has lived in Livingston for the past four years, has been playing the drums for 51 years. He started drumming from age five all through public school and college, in various groups including concert bands, orchestras, jazz bands, marching bands and many rock and jazz/soul bands.
He joined the American Federation of Musicians Union at 16 and played professionally for many different AFM bands while studying with Henry Adler in New York City.