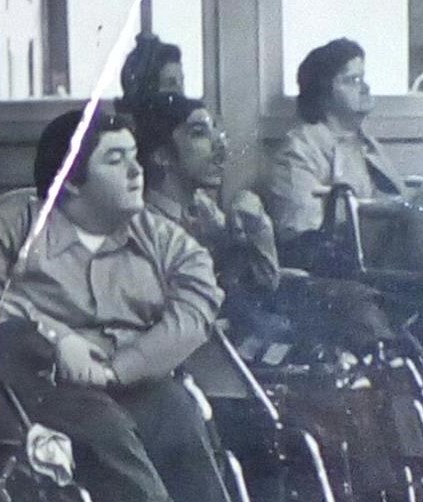 A rare photo of Cousin Howard (left-hand side of photo) in his classroom.

The Christmas of 1973 was so very dear and precious to my heart. I was to learn the important spiritual lesson to never give up on a goal, even in the midst of trials and tribulations. I was 20 years old and my cousin, Howard Palmer, was 19. We both were born in early September, our birthdays were just a few days apart. So that was just one of the common bonds that welded our spirit of brotherhood to each other.

Howard suffered from Muscular Dystrophy. From about the time he was five years old, he was confined to a wheelchair. We were close cousins, in all so many ways we were closer than a lot of brothers are. Howard was a very intelligent boy. He was an incredibly talented artist. He developed his own unique style in both oil paints and water colors. His forte was landscapes. But, he also had a great talent for painting portraits.

In mid-December of 1973, Howard came down with pneumonia. It was a most sad thing. When he went into the hospital, I cried. When my mom told me the news that Howard was in the hospital, I took a walk in the woods behind my house, to the towpath of the old Morris Canal. I sat upon the foundation of my great grandfather’s old icehouse and I cried my eyes out. I knew that the odds were that Howard was not going to pull through.

Evening came and that night, I cried myself to sleep. Howard was always like a brother to me. During the summer time, I would hop onto my bicycle and ride the ribbon of road of old Route 202, down to Howard’s house. We both lived on Route 202, about a mile apart. Howard lived in Montville, I lived in Lincoln Park.

We would sit at the kitchen table and I would write stories and Howard would draw and paint. I would arrive early morning to Howard’s house. I would help Aunt Bert, Howard’s mom, get Howard up from bed and into his wheelchair. Howard and I used to listen to Cousin Brucie play the hits on the old WABC-AM radio station, as we fulfilled our artistic and creative destinies upon that humble kitchen table.

Aunt Bert would be stirring soup at her stove, with home-made bread in the oven. Aunt Bert would make soup from scratch that would put canned soup to shame. At lunch time, I had the high honor of cutting the warm bread into thick slices. Howard loved to sop up the soup with his buttered bread.

When I saw Howard in the hospital, he was working on a painting for his dear mother. It was to be a surprise. It was early morning and there was Howard sitting up in his hospital bed, with his little bottle of oil paints spread all about his bed. It was a most heart-warming scene.

Howard told me that his blessed angel had come to visit him several times, since he was first admitted in the hospital. He spoke of his dreams of visiting with our relatives who had passed on. There was an ethereal calm in Howard’s voice. A kind of acceptance that he knew he was soon to leave this earthly existence and cross over to Heaven’s Gate.

Howard did finish his painting for his mom. It was a beautiful painting of a garden, with a white bench in its midst, a tall maple tree, and an angel in the sky. Truly, it was one of the most beautiful paintings I have ever seen in my entire life.

Christmas arrived. I had the high honor of being present, in Howard’s hospital room, when Howard gave his painting to his mom. I had brought the Christmas wrapping paper for Howard to wrap it with, the day before.

Aunt Bert cried when she opened her son’s heart-felt gift. We all cried. Grandma Kemmerer was there. Grandpa had passed away just two years ago. But, I felt Grandpa’s presence in spirit. My mom and dad and sister, Patti, were also there. Howard’s dad and his two brothers and his sister were also present.

Howard’s words were very simple. He looked at each and every one of us and simply said, “don’t cry. Please don’t cry. I’m soon going to be going Home to be with the Lord.”

In early January of 1974, Cousin Howard peacefully passed away.

My cousin Howard was a most courageous young man. I still miss him very much. I still deeply mourn his passing. His kind words still gently echo in my heart, “please don’t cry. I’m soon going to be going Home to be with the Lord.”