A History of Morristown Municipal Airport 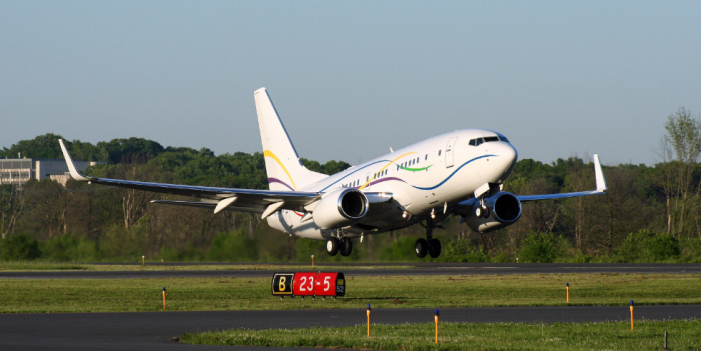 This Boeing Business Jet (BBJ) is one of the larger and quietest visitors to Morristown Airport. The 6,000-foot runway can accommodate this variant of the Boeing 737 aircraft. (Darren Large.) 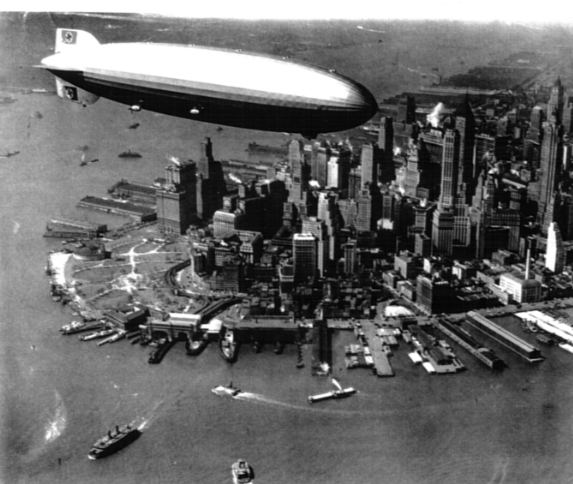 In the early 1930s, Morristown Airport was situated on a 280-acre tract of land occupied by the Normandy Water Works, on the Columbia Meadowlands.

Because the Great Depression little activity took place on the airfield. Then, in 1933, the federal government provided funds for airport improvements under the Works Project Administration.

The improvements were in preparation for an expected Zeppelin base, fueled by the commercial German dirigible traffic between Europe and America. On October 7, 1936, the German Zeppelin Hindenburg flew over the Columbia Meadows. Speculation had it that Morristown would be the future eastern American terminal for the transoceanic flights of the Graf Zeppelin Company. The crash of the Hindenburg ended all discussions of a Zeppelin base.

During World War II, Morristown Airport conducted an army primary flight training center. For more than two years, the airport had been conducting a Civilian Pilot Training Program, a program that anticipated the coming war and the need for pilots.

Near the end of World War II, the Army returned the airport, now worth $1.5M, to Morristown. In 1947, Morristown put $60,000 into the purchase and installation of hangars.

Morristown Municipal Airport (MMU) began welcoming aviation companies to Morris County. At the time, these firms made Morris County a leader in research and development of aviation technology. With the settlement of thousands of employees, satellite industries and companies began settling in and around Morristown.

Morristown, the County Seat for Morris County, attracted a population growth for decades. Zoning suits were thought to be the most effective way of limiting the airport’s expansion and the noise.

In a 1956 suit against Morristown, by Hanover Township, the township argued that the airport “is a business pure and simple” and “entitled to no greater sanctity than a private corporation.”

Morristown responded, “the airport served an essential governmental function serving the public need and … is immune from the zoning power of Hanover Township.” A unanimous ruling by the New Jersey Supreme Court ruled in favor of the airport.

In July 1969, Hanover Township, Morristown, Florham Park, and six members of the Citizens for a Smaller Morristown Airport, filed a lawsuit jointly to block the expansion of the runway and facilities to accommodate medium and short-range jets. A judge ultimately ruled in favor of the airport, but the expansion and noise issues continued.

The 1970s brought the jet age and further development. As the economy and airport grew, so too did noise and air traffic complaints. Neighboring towns continued their pressure to restrict airport growth. Each request for improvements was met with protests and threats of lawsuits. MMU would learn to ask for all it could get, and settle for what it needed. Other efforts, such as the demand for commercial passenger service would remain an unobtainable dream.

The 1970s, also saw work underway to extend the major runway. Engineers dredged a swampy area, moving over 1.7-million tons of mud, and earth for the runway. They installed a new instrument landing system and other improvements related to safety.

Airshows continued sporadically until Sunday, June 12, 1983 when a single engine experimental aircraft had both wings separate in flight, over the runway, and in front of an estimated 15,000 spectators. The crash was later ruled pilot error because the pilot exceeded the 200-mph speed limit for the homebuilt aircraft. The accident, and other logistical issues permanently ended the possibility of future airshows.

With its continual growth and maintenance expenses, the people of Morristown wondered; would the airport continue to pay for itself, or would the taxpayers, foot the bill? By 1960, they earned a profit of $70,000. This trend did not continue. In 1982, Morristown leased the management of the airport to DM AIRPORTS, LTD.

By 2002, there were several hundred aircraft based at MMU including jets, helicopters, and turboprops. Today it is the third busiest airport in New Jersey; surpassed only by Newark-Liberty International Airport, and Teterboro. Over the last three years, the number of airport movements has been increasing from 75,356 in 2017, to 82,900 in 2019.

As a General Aviation Reliever Airport, MMU accepts private, corporate, air taxi, air ambulance, training, and military aircraft. The majority of New Jersey’s business fleet is located at Teterboro and MMU. In 2000 there were 325 aircraft based at MMU and in 2019 there were 241.

In addition to being a major transportation asset, MMU is also a major economic asset to Morris County. It supplies an estimated $13 million in tax benefits to the community.