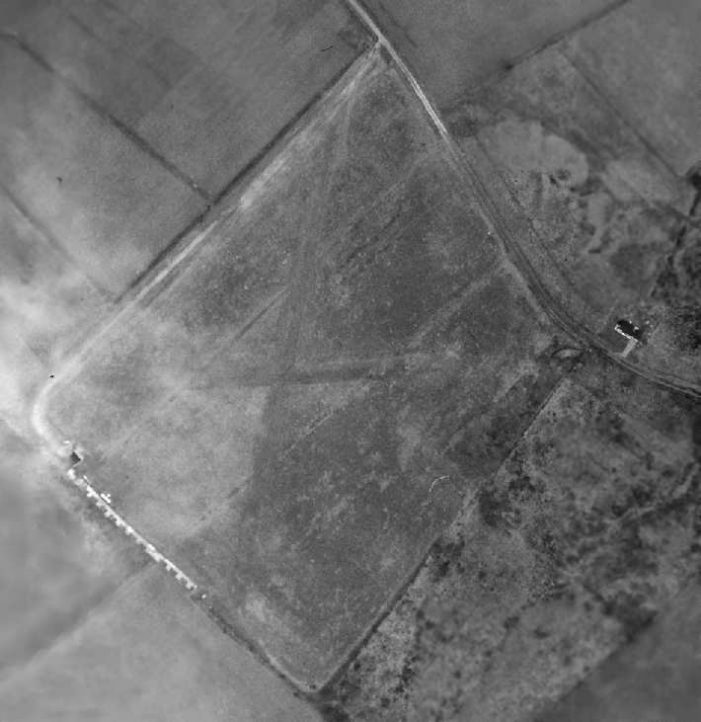 The earliest photo known of Budd Lake Airfield was a circa 1950-54 aerial view. It shows the field having two grass runways, and a row of 10 T-hangars along the southwest side, in front of which is one light aircraft.  (Courtesy Tom Beamer). 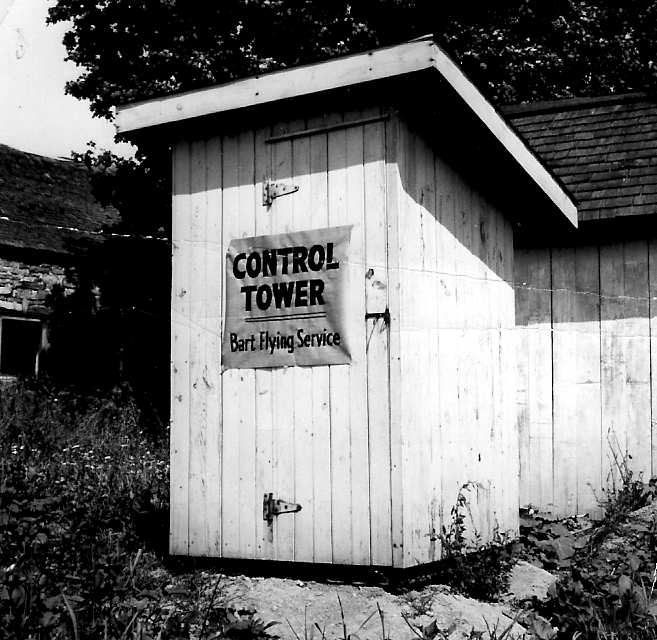 A circa 1950-54 photo of the "Control Tower" at Budd Lake Airfield was a little pilot humor. (courtesy of Tom Beamer). 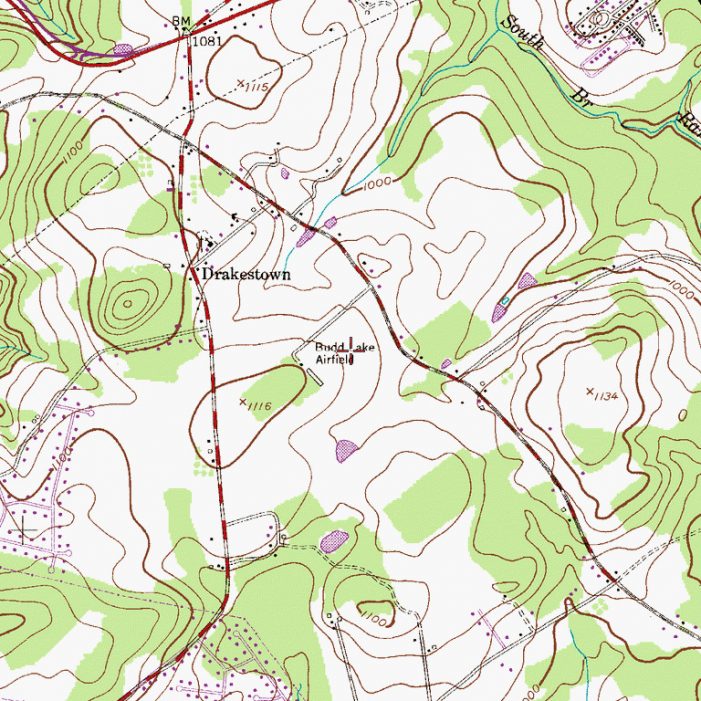 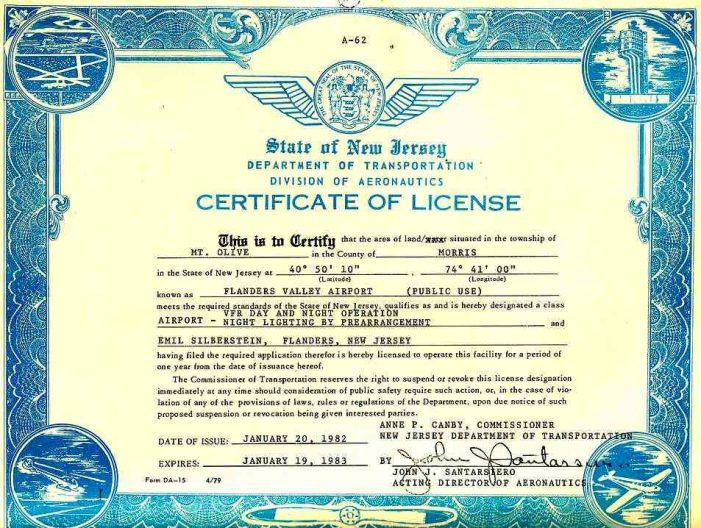 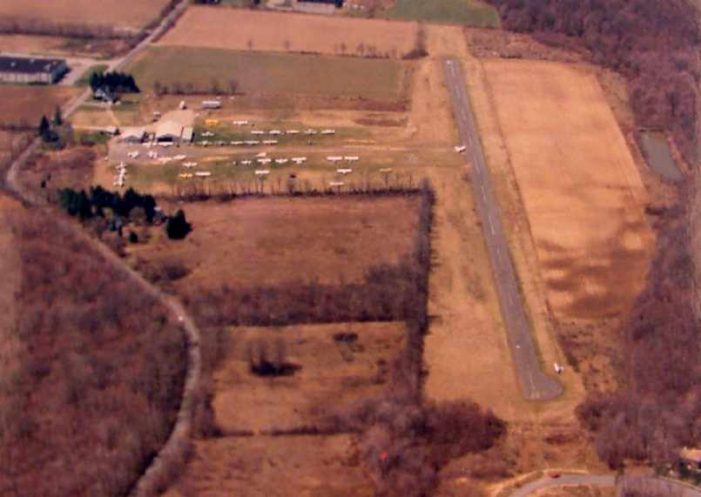 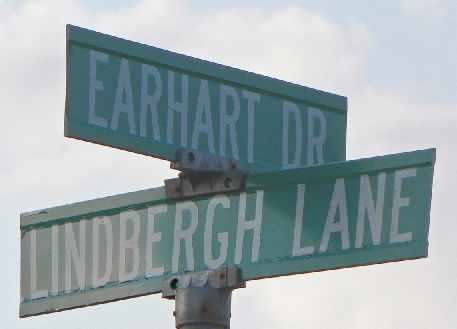 This remaining street sign is a reminder of an aviation era now long gone. (Courtesy of Daniel Berek)

The end of World War II spurred an interest in civilian aviation. In 1946, the beginning of Budd Lake Airfield appeared south of the intersection of Drakestown Road and Church Road. Although technically in Washington Township, it served pilots from nearby Mt. Olive, until Flanders Valley Airport opened in 1956.

Eileen Stokes, of the Washington Township Historic Preservation Society said, “This airport operated for about a decade, starting in 1946.”

The country was transitioning from military to civilian life and not surprisingly, the airfield did not appear on the August 1946 New York Terminal Aeronautical Chart or the 1947 United States Geological Survey Topographic Map.

The first representation of Budd Lake Airfield was on the July 1949 New York Sectional Chart.

An early aerial photo shows the field with two intersecting grass runways, each 1,800 feet long and a row of 10 T-hangars along the southwest side, with one light aircraft parked.

There was a row of tin-roofed open-front hangars that could have room for 20 aircraft. The airport offered flying lessons, tie downs, hangars, fuel, repairs and a snack bar.

On July 28, 1952, a sky diving accident took the life of a 20-year-old mother of a four-month-old when her chute failed to open. This was the only recorded fatality related to the airfield.

One pilot said, “The airfield had never been ideal.  There was a tree line too close to the runways, making landings awkward.”

According to Tom Beemer, “The runway had wires at one end, and trees at the other end. It was a different era, accidents were expected.”

And so, the expected happened. On August 7, 1954, The Paterson News headline read, Plane Damaged Near Budd Lake.  “A small plane overshot Budd Lake Airfield on August 6, and had a wing crushed by a fence post as the pilot tried to land in a nearby cornfield. Its two occupants Frederic J. Stickle, of Burnt Mill Rd., Somerville, the pilot, and Charles Trimmer, 14, of North Branch, a passenger were not hurt. Police said the pilot admitted he did not see the fencepost and he came down in a cornfield. Then, the tree line too close to the runway may have made the landing problematic for the pilot and had been a factor in the accident.

The Federal Aviation Agency and the National Transportation Safety Bureau (NTSB) should have investigated the accident but there is no record of the accident in the NTSB records.

The airfield ceased operations in 1957. According to the New Jersey General Aviation Study Commission’s Subcommittee on Airport Closings, said Budd Lake Airfield closed because the owner, who lived about 500 feet from the runway, did not like the noise and refused to renew the lease. Other factors contributing to the closing may have been the memory of the young woman killed in the sky diving accident probably lingered.

Today, the land sits vacant. “Nothing ever has been built on this land,” said Stokes, “but township officials said that the owner has made applications that indicate he’s planning some sort of development.

Stokes reported in 2003 that the former Budd Lake Airfield “will soon be built upon for a new elementary school.” The Cucinella School was built on adjoining property, not on the airfield.  The school opened in 2008, adjacent to the southwest side of the Budd Lake Airfield property.

“So, it was being built for a few years before that,” said Stokes. “It was originally reported to me that the school would be on the airfield lot. There was an attempt to place housing on the property but to my knowledge nothing has even been constructed or approved.”

Some aviation experts say a few New Jersey airports were victims of high taxes, soaring real estate prices, and developers looking to build houses. Flanders Valley Airport was one of those victims.

John Boyce, a World War II pilot, and retired Eastern Airlines pilot lived on Ironia Road and owned a private landing strip, licensed as a “private aviation facility,” (later called Flanders Valley Airport). He opened the field for his personal use and for private pilots in 1956, around the time that Budd Lake Airfield closed, and opened it to commercial use in 1966. He hoped to make it into an airport for the executive flying industry and would include airplane servicing and fuel facilities.

The field he planned would need 38-acres in Roxbury Township, and in Mount Olive Township, but both were zoned for residential with minimum of one-acre lots. A variance was needed, and after months of discussions it was granted.

Flanders Valley Airport appears to have begun construction in 1956 when an aerial photo shows a long cut (for a runway) between two tree lines.

On December 27, 1976, Alan Rosenzweig, 54, suffered injuries when his single-engine Beechcraft Bonanza crashed on takeoff about 8:30 a.m. There were no passengers aboard.

A pilot at the scene said Rosenzweig seemingly was unable, to develop enough power to reach flying speed. The plane attained an altitude of about 30- feet before crashing into a line of trees about 400 feet west of the airport. The craft passed between two trees, shearing off both wings, while a third tree ripped off the left tail stabilizer. Police said the fuselage traveled 138 feet after hitting the ground, leaving a trail of debris. The Flanders First Aid Squad worked for nearly half an hour to free the pilot because the door was wedged shut by the impact. They finally succeeded with the help of “the jaws of life.” Rosenzweig had a serious head wound and was put in the intensive care unit.

According to the NTSB report, Rosenzweig was an experienced pilot with 834 hours flying time with an instrument rating. They listed the cause of the accident as, “Premature Lift Off and Failing to Obtain/Maintain Flying Speed.”

“There were several inches of snow on the runway at the time, which is normally plowed, but had not yet been removed because of the early hour,” said one pilot. “Nobody is usually out flying that early in the morning.”

The weather at the time was cloudy with approximately 4-inches of snow on the ground, and some fog, but within the Visual Flight Rules (VFR). There was no evidence the snow contributed to the crash. The report states the pilot died from his injuries on December 29.

Eight months later, in August 1977, the Flanders Valley Airport was put up for sale. A realty company had placed an

ad but withdrew it because the airport operator, indicated he was negotiating with the airport owner. The realtor said the “negotiation was not getting anyplace.”

In October, the airport went back on the market. The realtor said there had been quite a few inquiries, but none has yet resulted in anyone touring the airport.

Following its sale there were hints from Silberstein that he may expand the runway or turn the property into an industrial park and heliport.

By the time of the sale, about 50 small private planes were based there.

Subsequently, Silberstein purchased another 20-acres of residentially zoned property on the west side of the airport in Roxbury Township, and negotiated to buy another nine acres on the east side in Mount Olive Township.

The airport had been a source of controversy for years. Opponents contended most of the runway is in Roxbury, while the buildings are in Mount Olive.

On December 11, 1982, the Daily Record reported the owner asked the township to rezone his land so 275 multiple-dwelling units could be built there. Silberstein, was asking that the township’s land at the airport be changed from its 1-acre residential zone to a zone that permits five housing units to an acre. Silberstein indicated that he wants the land to be economically viable.

The airport closed in 1984, and a housing development now occupies the site.  According to the 1996 New Jersey General Aviation Study Commission’s Subcommittee on Airport Closings, Flanders Valley Airport closed “when the developers encroached on the runway, building homes very close to the approach end of the runway.”

All that remains today to hint that an airport ever existed are a few street names (Earhart Dr., Wright Court, and Lindbergh Lane) bearing testimony to what had previously occupied the area.