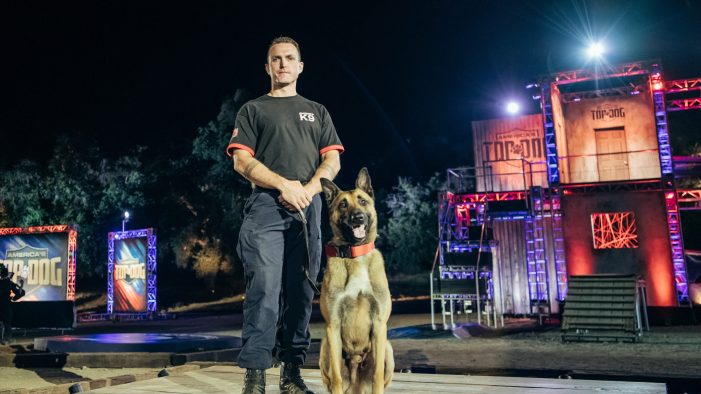 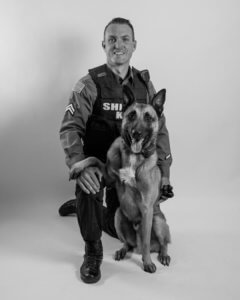 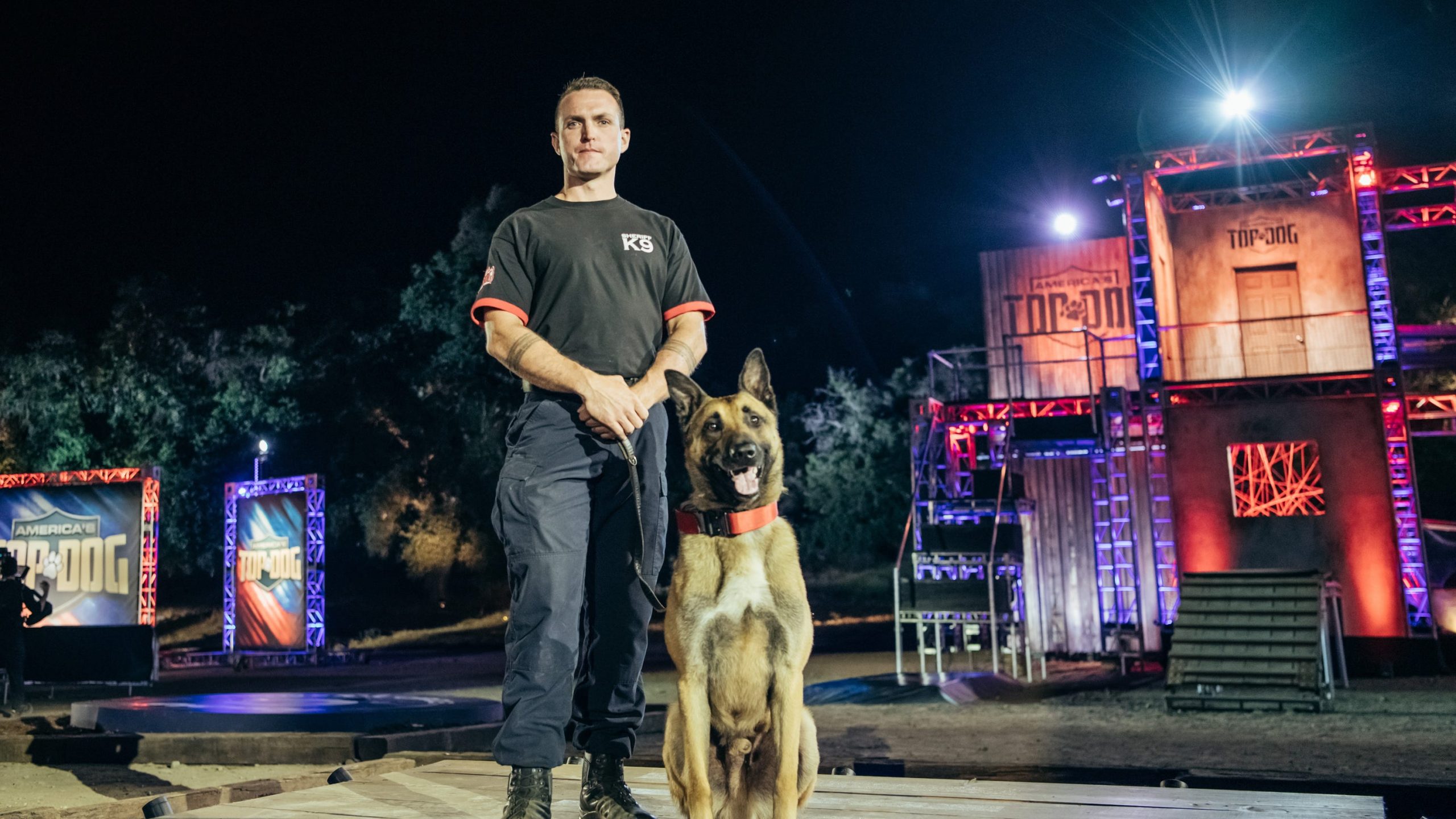 The win for Kai, a 4-year-old Belgian Malinois, and McMahon, a dog trainer who has been with the Sherriff’s office since 2011, aired on Wednesday, March 18.

McMahon, a Roxbury resident, learned of “America’s Top Dog” in the spring of 2019, when he happened to be at a civilian sport competition with Kai. He was approached by another competitor and asked if he had heard of the new show, was informed that there was a casting call, and encouraged to enter. “I went home,” recalls McMahon, “and my wife and I kind of laughed about it and said that it would be a neat experience if Kai and I were on there (the show). My wife put in a submission for me for the show, and then within a couple of days I got called for interviews, and then within a day or two I got the call that they wanted to cast me for the show.”

A week later, after approval and official paperwork were submitted, McMahon, his wife and two children, along with Kai flew to Santa Clarita, California for the competition. The series, which initially featured 50 K-9 teams, first aired  on January 8, 2020. McMahon and Kai first appeared on an episode on February 26. The courses included jumping and climbing over obstacles, tracking down objects via their scent, finding and apprehending a suspect, and swimming across a 46-foot length  pool of water. As far as preparation for the show, Kai and McMahon didn’t have or need much. Everything seen on “America’s Top Dog” was practiced by the duo while Kai was being trained for his police duties. “Just the physical fitness portion of it – we actually run together all the time daily, go out and exercise together, make sure we both have endurance,” affirms McMahon. With regard to the latter event, he mentions that some participants had trouble with it. He and his partner didn’t, and with good reason. “Kai and I go swimming all the time. I take him out in the boat, have him follow me while I’m out in the canoe, all that kind of stuff. So, he’s been more than prepared for all that.”

The finale featured three rounds and seven opponents, and in round three, McMahon and Kai outpaced Alpharetta, Georgia Police Sergeant Mark Tappan and his partner, K-9 Mattis, by nearly 9 seconds in “The Doghouse,” which consisted of passing through a tangled spider web, crossing a narrow plank, running through duct work, and then down a set of stairs. Kai then completed the course by “apprehending a suspect,” and released the suspect to McMahon when commanded.

The duo completed the last set in under two minutes, securing the title.

Winning the competition goes beyond victory. It’s also a true visual of friendship and reliance. For McMahon – and yes, Kai – it’s all about relationship and respect. “I got Kai when he was eight weeks old,” says McMahon, explaining the duo’s background. “He was bred out of my male who was my retired patrol dog and competition dog, named Ronan. Ronan was my first patrol dog, my first dual-purpose dog at Morris County, and he was unique because he was my competition dog before I got employed by the Morris County Sherriff’s office.”

Prior to his joining the Sherriff’s office, McMahon and his wife Michelle  ran their own business, training and selling dogs, many to police departments. “We sold dogs across the country, to many agencies who needed trained Malinois and German Shepherds,” explains McMahon. While running his own business, he had sold a number of dogs to northern New Jersey agencies, one being the Morris County Sherriff’s Office. Therefore, he was familiar to and had a rapport with them. He was then hired for the canine unit as an investigator. Afterwards, McMahon volunteered to donate Ronan and enter the agency as his partner – a first for the Sherriff’s office. Ronan stayed for a few years before a neck injury forced his early retirement. He was bred with a female Malinois named Boyca, and Kai was born amongst the litter. “Kai came into our unit at eight weeks old, and along with Kai we took two other puppies from the breeding, and they went into a new program I started at the office basically as a working dog development program, as opposed to the traditional method of buying a dog and trying to bond with it and dealing with training issues developed by somebody else.” The dogs were raised in-house so that McMahon and the other K-9 handlers knew all the way up to certification exactly what was done with the dogs, what they had been exposed to, and increased the bond between they and their handlers. “It really strengthens the relationship and changes the dynamic, which in law enforcement is unique because law enforcement agencies don’t raise puppies; they just buy an older dog that’s pre-trained, or they may go through a 4 to 6 month academy class as they’re training.”

Kai went through about two years of training prior to his active duty out on the road, so he was well schooled. McMahon is quick to mention the importance of bonding and socialization with people and different environments during the period, when he and Kai were side-by-side during many ventures from home or office. “By the time they’re two years old, we want them to be a more confident working dog.”

“I took that approach with Kai, and we experienced a lot together.” In fact, McMahon spends more time with Kai than he does with his own family in most cases. The team is on the job 40 hours per week, go out together on almost every canine call, but when they both head home at the end of the day, Kai is part of the McMahon family. “When I punch out of work, he punches out of work,” says the Officer.

McMahon takes a humble stance when discussing the “America’s Top Dog” victory, preferring to laud the Sherriff’s office canines. “On a personal level,” he says, “it really didn’t change much for me – other than the fact that it brought positive light to law enforcement canines. I think it brought positive light to law enforcement communities as a whole, but then it also showcased the abilities that these dogs have, and how much they can contribute not just to law enforcement communities, but to the civilians that we’re serving.” He cites this as an asset as far as providing services and protecting the public – whether it’s for narcotics or explosives detection or just basic patrol work. “They’re an excellent tool for us.” McMahon then speaks to the handlers and the canine unit itself. “For the Sherriff’s office, I’d say we’re prouder not for myself but to provide a spotlight for our canine unit. I think we’re one of the premiere units in the country. I think we have an awesome training program and a very dedicated group of guys that go above and beyond the call of duty, especially as to what the canines requires. They’re constantly out working, putting in training on their own time, spending money out of their own pockets to provide for their dogs, getting education and everything else. Because, as a unit, we’re very passionate about what we do.”

McMahon is also extremely cognizant and grateful for all the support received as he and Kai faced stiff competition. “I’d like to thank my wife and family for all of their love and support; Sheriff (James) Gannon, Undersheriff (Mark) Spitzer, Chief (Kelley) Zienowicz, Chief (Richard) Rose, and all of the members of the Morris County Sheriff’s Office for all of their support and for allowing Kai and I to partake in this endeavor; the members of the Morris County Sheriff’s Office K-9 Section, and all of the canine handlers that have assisted Kai and I on our journey from puppy to becoming America’s Top Dog.”

“I’m just happy to showcase what Kai and I are capable of, and obviously happy with the end result.”

Sheriff Gannon said he was pleased with the team’s win and was proud of how they represented the department, as well as exhibiting on television what the county has come to expect from the Sheriff’s office.  “I’m so proud of Detective Corporal McMahon and K-9 Kai for being designated America’s Top Dog and Handler,” Gannon said. “This is the level of service expected and delivered on a daily basis to the people of Morris County.”

McMahon hopes that he and Kai will remain partners until the latter is retired, which would be when the dog is about 10 years old. “God willing, he is able to keep doing it, and the two of us will be there together.”