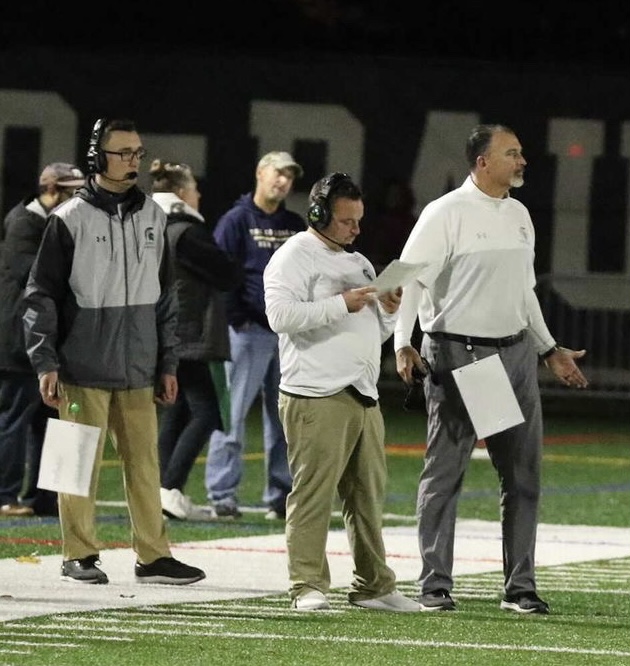 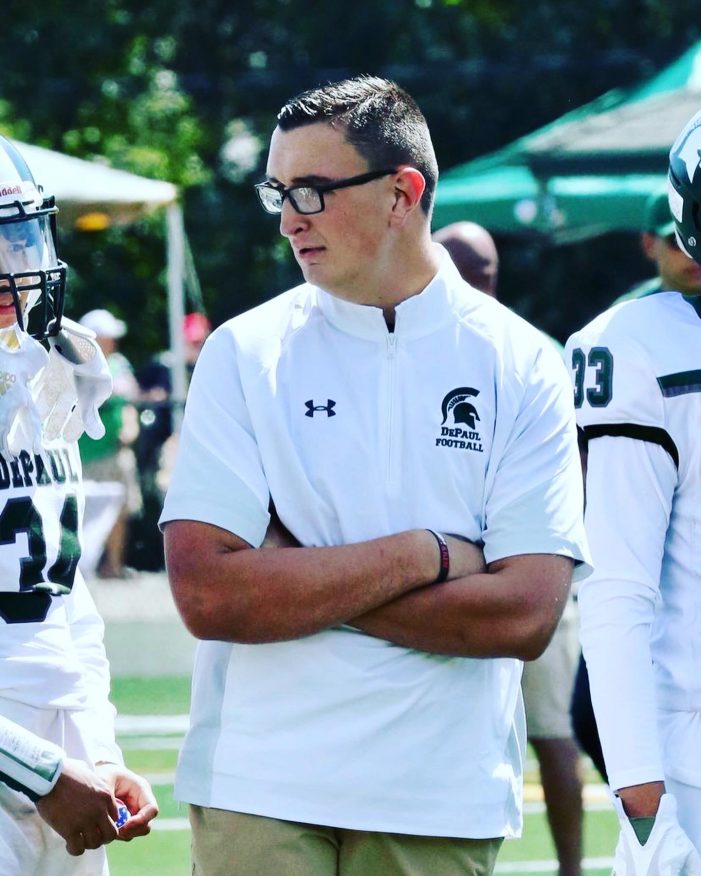 Zachary, an Assistant Coach for the team and a senior at Secaucus High School, also has a great football mind. Just ask Campanile. “There was a time when I asked him what we should run for the first play of the game,” Campanile recalls. Zachary decided on a play, and explained why to Campanile. “I was like, ‘Man, that’s spot on. That’s a great idea.’ We ran it as the first play of the game, and he had reasons why and he backed it up with a lot of good ideas.” The result? A 13-yard gain and a first down for the Spartans.

“I love it!” states Zachary enthusiastically. “I love making suggestions to them.”

“Zachary is a special needs teenager,” explains his dad, who after this interview would attend with his son a DePaul coach’s meeting and talk about plans for the new year and next football season. “He (Zachary) has Sotos Syndrome,” Zac says. “He is the happiest person I know, and makes everyone around him feel like they are his best friend when they meet him. He has some limitations, but for the most part he is very much independent.”

Sotos Syndrome is a disorder characterized by overgrowth in childhood, and learning disabilities or delayed development of mental and movement abilities, but the younger Naszimento doesn’t let it stop him. In addition to his DePaul duties, Zachary was also voted Secaucus High School Homecoming King this past October, has a work internship as part of his senior program with the Secaucus Recreation Department, and works a few hours a day at the Secaucus Recreation Center. “He is hard working, committed, and resilient,” says Zac of his son. “Zachary is my best friend.”

Coaching is in the Naszimento blood. Zac’s dad, Bruce, was a coach for many years. “My dad coached my brother in high school. He didn’t coach me, but my dad’s been doing it forever. So, it’s similar; I grew up the same way with my brother and my dad, and now Zachary’s with me. It’s priceless.”

Both Naszimentos are in their second year at DePaul, which finished with a 9 – 3 record this season. “I teach in Union City,” Zac says, “and what happened (in 2020) was, obviously with everyone being home and doing virtual learning, it was a lot more accessible for me to just take Zachary with me every day to practice. He’s always been around with me, but last year was much more consistent. The staff and coach (former head coach and now Athletic Director, John) McKenna and coach ‘Camp’ and the kids really embraced him coming around and being with me. That’s how that came about; it was kind of like a natural evolution, I guess, how it kind of worked out. Then, with the weight room and the summertime, he just basically came with me, and that sort of took on a life of its own.”

“Just being there every day,” says Zachary about what he enjoys most about being on the DePaul sidelines. “I like being with the kids, and the coaches are so committed. It’s like a family.”

Zachary often second guesses his dad’s offensive line schemes on the sidelines during games or after games on the ride home, but Zac doesn’t mind. Sometimes his son’s suggestions prove fruitful. “I’ll have different input, some input about different things, and Zachary will say while we’re driving home, ‘You know, I don’t think that we should run that play’ or ‘I don’t like that so and so was on the field, that personnel grouping.’ It’s kind of funny, because sometimes it’s pretty accurate.”

The leaves will change colors as the 2022 football season arrives next fall at DePaul, but one thing will stay the same. Zachary Naszimento will again join his dad on the Wayne, New Jersey turf. “I’m looking forward to it,” Zachary says.