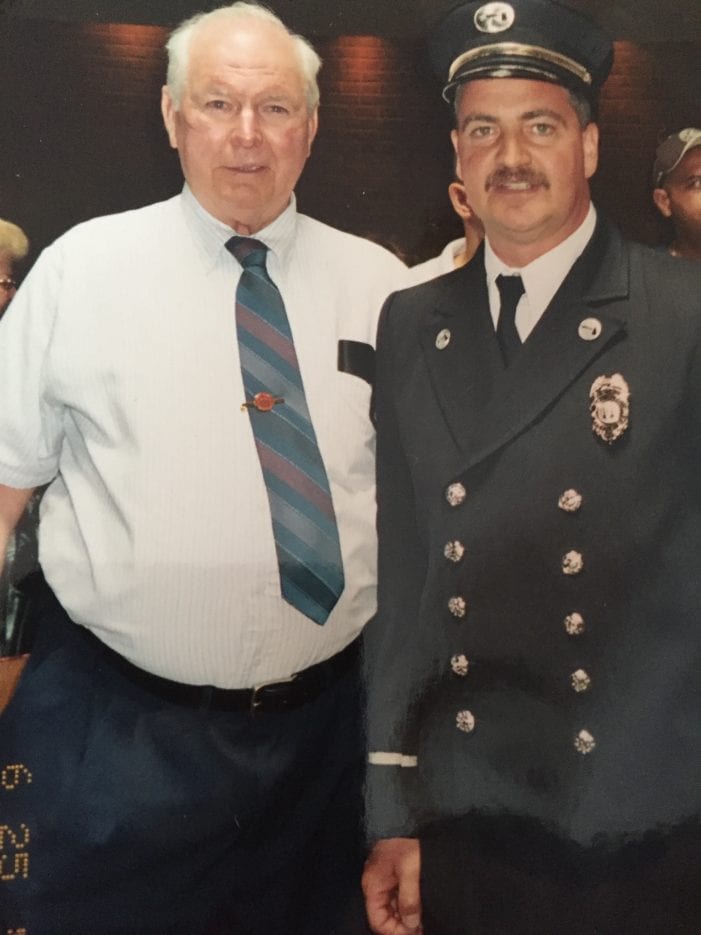 2007 when I was promoted to captain with the Passaic NJ fire department. 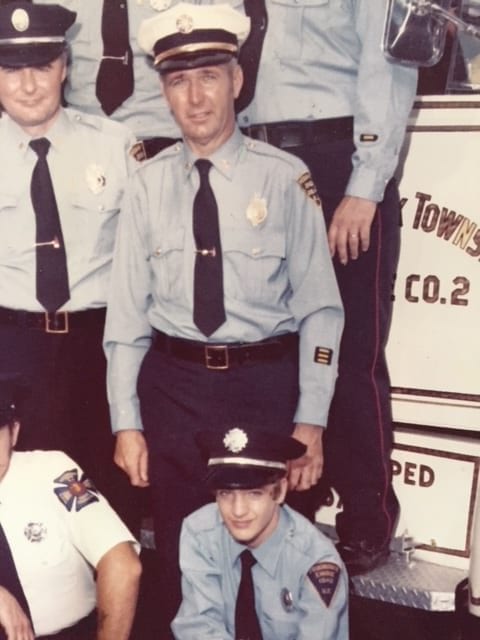 Ed VerHage and I when I was 13 years old

Ver Hage passed away at 88 on Feb. 7 and because he was such a committed member of the volunteer force, he was given the black and purple bunting that is usually reserved for firefighters that give the ultimate sacrifice in the line of duty.  His last ride on the Engine Co. 2 fire truck was from the wake at M. John Scanlan Funeral Home in Pompton Plains to the First Reformed Church Cemetery.

According to those who knew Ver Hage best, he gave everything to Engine Co. 2 and to the community he dearly loved.  Community involvement and civic duty was his true passion.

Jim Bonelli, a fireman at Engine Co. 2, became friendly with Ver Hage at the tender age of eight, when he and his friends would ride their bikes around the firehouse in 1968.

“They didn’t like kids riding around the house, but he took us under his wing,” Bonelli said.

He recalled that Ver Hage loved to foster a love for firefighting in the local kids. “He would give us little tasks to do, like sweeping up or washing the fire truck. He took us to parades and events. He always kept us involved,” Bonelli said.

“He even bought us uniforms at 13,” Bonelli added.  At 32, Bonelli became a professional firefighter and credited Ver Hage as an inspiration.

Ver Hage was an industrious man. After getting out of the army in 1955, he owned a small trucking company and then got a job as a pyrotechnic engineer with Braen Stone Industries and worked in the quarry that is now Woodland Lake in Pompton Plains.

“There are two words to describe him, honesty and integrity,” Bonelli said, “He never said a bad word about anyone. I saw him get mad once and it was because someone stole something off the firetruck.”

Ver Hage was Chief of Engine Co. 2 from 1965 to 1985, but he remained active in the community and with the fire department, even after retiring from Braen Stone Industries.

He never had children of his own, but was survived by his long-time companion Phyllis Hughes and her four children.  He was once married, but his former wife had already passed.

His step-son, Rick Hughes, said that he and his siblings, Gary, Cindy and Jerry considered him their step-father, even though he and their mother never married.

“He was very much involved in the community and always helped people,” and at the firehouse, “he went out of his way to pick up firefighters and get them to training,” said Hughes.

He recalled that Ver Hage also helped start Pequannock’s fire prevention bureau in the 1980s, and mentored its inspectors.

He said his step-father grew up in Prospect Park and during high school worked at his uncle’s greenhouse as a florist in Wayne.  “He always had a plethora of knowledge on plants and flowers.”

After retirement, Ver Hage started a chocolate making hobby that kept him involved with the community. He had molds for every occasion and delivered them to children, a diner he frequented, the post office and friends and neighbors along the way.   “Any way he could get a smile,” Hughes said.

“He gave them to my daughters every holiday,” Bonelli said.

A mechanically inclined man, Ver Hage treasured a ‘76 Chevy pick-up and a ‘63 Chevy Impala that he loved working on.  Hughes also remembered a blue station wagon, with emergency lights on the roof that became famous in the community. Ver Hage later sold it to another fireman, when he retired as chief.

Dave Reeves, another long-time volunteer firefighter at Engine Co. 2, started going to the firehouse in 1976 when he was 10, when his father was a volunteer and Ver Hage was chief.

“He was extremely nurturing of to all the young firemen,” and encouraged them to bring their kids and “to keep the house going,” Reeves said.

When Reeves became fire chief at Engine Co. 2, he said, Ver Hage always made time when he needed guidance.  “He would nurture you and help you come up with the right answer,” Reeves noted.

Like many mourning Ver Hage’s passing, Reeve’s said “It’s tough to think of just one story.”  Yet he recalled one that had been passed down through the decades, a legendary prank Ver Hage pulled to get his fireman in the ‘60s to think outside the box. Ver Hage put smoke generators in the fire house, disabled the automatic garage doors and walked down the road to wait for events to unfold.

At the critique afterwards, Reeves said, Ver Hage told them how well they performed and how proud he was of them.

“He was always a positive influence. He would never knock you down. He would always build you up,” Reeves said.