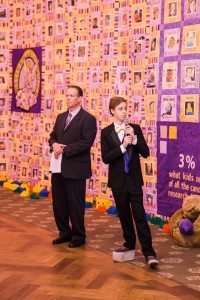 A proclamation from the township mayor naming a day after him and then presented an Outstanding Citizen award, 17-year old Malcolm Sutherland-Foggio impresses those who meet him and learn about his mission to raise money and awareness for pediatric cancer research.

“Malcolm has lived in our town; some know him; some of the others did not meet him before,” says Williams. “But when they did that night of the council meeting, when Malcolm spoke about his mission, Williams says “I’ve never seen any of them speechless. People were just weeping,” from his story and experiences in battling cancer. He gave a very moving speech at the council meeting that left myself, the mayor and council and audience members in tears and unable to speak for several minutes as Malcolm described his first stay at the hospital that was treating him for cancer.”

Williams says, “He is quite the local hero! He is a very bright young man, who despite being in a considerable amount of pain, managed to think of others and start this foundation for pediatric research.”

Battling cancer for seven years, Malcolm was diagnosed in 2008, at the age of 10, of having Pelvic Ewing’s Sarcoma, a highly aggressive and malignant bone tumor. The youngest of three boys, Malcolm was a healthy kid at soccer practice when “I felt my hip pop,” he describes. “The coach carried me off; mom took me to the orthopedist the next day.”

When an MRI unveiled a massive tumor in the growth plate of his hip, Malcolm was sent to Children’s Hospital in Philadelphia, underwent chemotherapy and removal of his hip, describes Malcolm, a senior at the Delbarton School in Morristown.

“I got through it,” he says. “I’m doing as well as could be expected.” Besides facing some health related issues, mostly due to the chemotherapy that “killed my immune system,” Malcolm says “I don’t let it kill me; I live life the best I can.” He is done with treatments but goes back for a checkup every six months to make sure the cancer has had no long-term effect on his organs, he explains.

While going through his treatments, Malcolm was compelled to share the story of pediatric cancer, publicly speaking out and raising funds through the sale of wristbands, while enduring 14 rounds of chemotherapy, surgery to remove his hip, endless side-effects, rehabilitation and keeping up with his schoolwork.

He had realized that awareness for pediatric cancer was lacking and that only three percent of cancer research funds are directed to childhood cancers in regards to researching for cures.

Two months into his treatment, Malcolm says “I saw kids dying around me.” That’s when he started selling $3 rubber wristbands and in just three months raised $13,000, donating all proceeds to the Children’s Hospital of Philadelphia for pediatric cancer research.

Just a few weeks after his surgery, one night while in his hospital bed, “something broke the silence; you heard a mom scream. Michael was three years old and his mom would never see him grow up.”

That was when Malcolm came up with his idea for the Make Some Noise: Cure Kids Cancer Foundation; he incorporated Sept. 24, 2009, at the age of 11. His plan was to host musical benefits to raise money to raise awareness and fund pediatric cancer research.

Malcolm tours the country meeting with researchers and touring lab facilities, to better understand the crisis and the promise of what lays ahead in medical research. During his travels, Malcolm carries his tribute quilt “The National Angel Quilt,” to honor the memories of children who died for the lack of cures. The quilt – which is more than 60 feet long, featuring images, names and ages of 120 of these children to date – has travelled to 20 states so far, and will continue to grow and tour until cures have been found.

To support his mission, Malcolm has been busy travelling 55,179 miles; flew on 21 planes; interviewed on radio, television, newspapers and magazines; given 39 speeches; attended 27 fundraisers; spent 180 volunteer hours in research labs; written a book; has become an accomplished artist featuring portraits of childhood cancer survivors; mentors cancer kids; visits cancer kids in the hospital; delivers gift baskets, bikes, toys, event tickets and stuffed animals to kids in treatment, and even spends his own money to buy i-pads for other kids.

“Despite enduring 14 rounds of chemotherapy, surgery to remove his hip and exhausting rehabilitation, Malcolm kept up with his schoolwork and came up with an idea; instead of feeling sorry for himself, he decided to take action and deliver his message nationwide to help raise awareness and money for pediatric cancer research for kids who are currently facing the disease.”

Continued in the proclamation, the mayor states, “due to Malcolm’s tireless dedication to this cause, he has raised more than $2 million to date for pediatric cancer research. Malcolm is now in remission, but continues to be a beacon of hope and fights each day for children who are facing pediatric cancer. Florham Park is so incredibly proud to have such a courageous and giving young man as one of its citizens.”

Malcolm was honored to be recognized by his community.

“I thought it was great; I never really had an honor like that,” he says. “To have a day named after me was really special.” To have two councilmembers recently attend the gala and award him with an outstanding citizen plaque, he says, “was a humbling honor.” It reiterates how “it’s real important work and helps spread the awareness of pediatric cancer.”

In addition to the annual gala, the Make Some Noise Foundation hosts a 5k Heroes Run in the fall.

“My overall goal is to keep working for not only a cure but a cure without side effects,” adds Malcolm who intends on attending college in the fall and possibly study medicine.

For more information on Make Some Noise or make a donation, contact www.makenoise4kids.org.