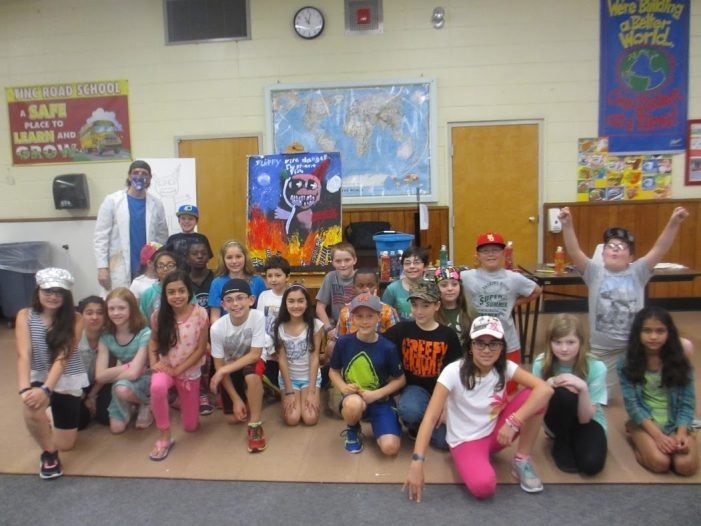 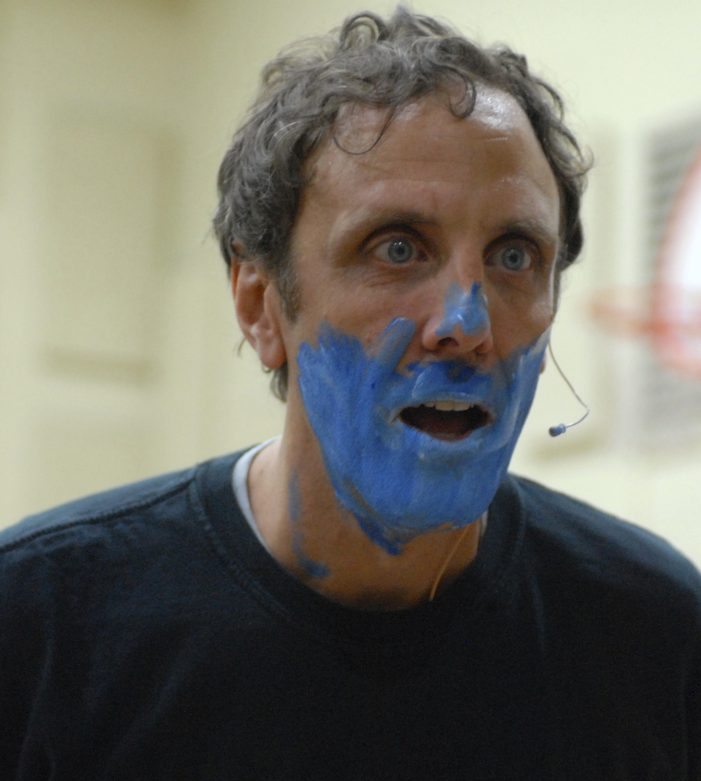 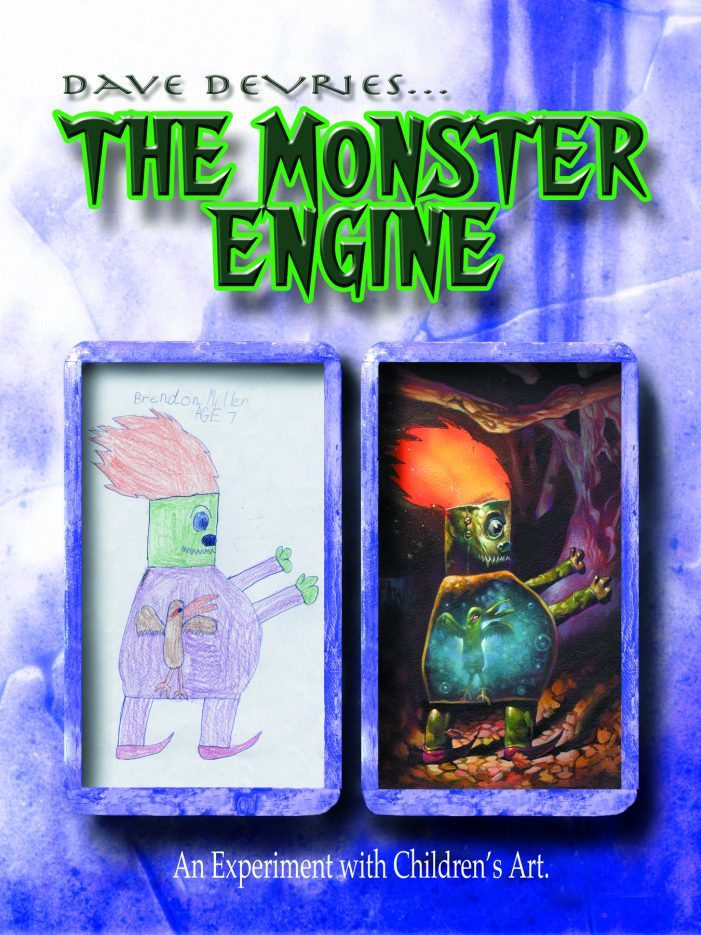 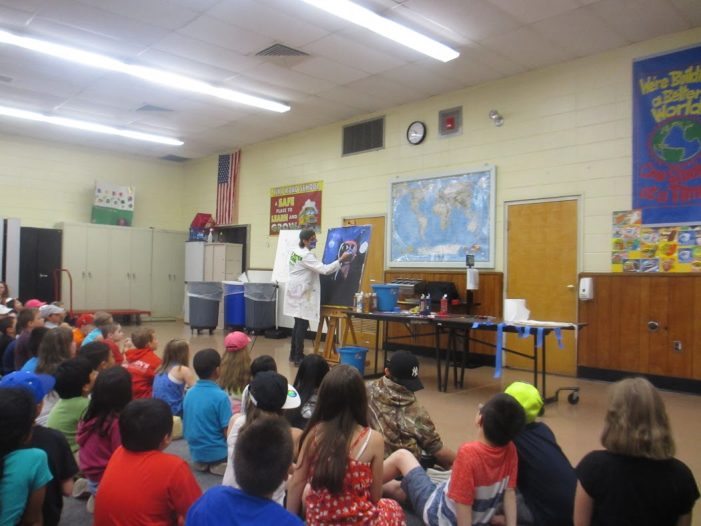 Tinc Rd. School students in grades three through five got a first-hand look at how a drawing can be turned into a 3-D monster.

Illustrator and teacher Dave DeVries of Budd Lake visited the school on Friday, May 27, at 10 a.m., to present his Monster Engine demonstration to the 222 students in the lunch room. His son, Aiden, is a third grader there.

Sharing his passion with others, especially to his son, was one demonstration DeVries did not want to miss.

“I really wanted my son to experience this while he’s young,” says DeVries, who travels around the country with his presentation when he’s not teaching.  “This means more to me that it was done and he was part of it; to make an impression and inspire kids.”

To prepare for the presentation, students were asked to complete a pencil drawing of a monster prior to the assembly.

“They were informed that there was going to be an assembly and that the artist was going to choose one picture via a lottery,” explains Andrea Shore, Tinc Rd. School social worker, who helped organize the visit.

From the drawing he randomly picked, DeVries traced the drawing onto an illustration board as the students watched. During the activity, DeVries uses two easels: a black matte board becomes the finished painted version while the white remains untouched for comparison.

“Then I paint it live in front of them,” he explains. “While painting I have help from the audience. I go around and pick kids. Can you come up and draw a moon? I’m kind of a clown up there. I end up with paint all over my face. They get a little messy too. I tell funny stories about the artwork I’ve done. The energy is kind of high.”

He had picked the drawing of student Melanie Lopes, who, happened to be absent that day but the finished monster illustration is one to be proud of as DeVries left it for the school to display and enjoy.

DeVries also spoke to the students about his work as an illustrator of video games and comic books in which “I had to paint a lot of characters.” He told the students how he just finished working on ‘The LEGO Movie 2.” He presented a slide show and also talked about the work he does with people who have disabilities; and his Monster Project that he has been doing for 18 years.

His book, published in 2005- “The Monster Engine” is a demonstration, lecture and a gallery exhibition of his 48-page collection of drawings, paintings, photo and interviews. The idea stems from his single question “What would a child’s drawing look like if it were painted realistically?”

DeVries says, “I started looking at kids’ drawings years ago. It began at the Jersey Shore in 1998, where my niece Jessica often filled my sketchbook with doodles. While I stared at them, I wondered if color, texture and shading could be applied for a 3D effect. As a painter, I made cartoons look three dimensional every day for the likes of Marvel and DC comics, so why couldn’t I apply those same techniques to a kid’s drawing? That was it… no research, no years of toil, just the curiosity of seeing Jessica’s drawings come to life.”

As an illustrator for 28 years, DeVries decided to go into teaching two years ago when he earned his teaching degree through the Alternate Route Plan. Since Sept. 2014 he has been teaching at the Jefferson Middle School for grades six through eight.

Since 1995 he had been teaching illustration at the college level at schools such as Syracuse and Fashion Institute of Technology in Manhattan.

He says “I have a lot of teaching experience but teaching little kids is different.” When it comes to art though, he can see creativity no matter the age.

“Honestly as a teacher I see kids gifted in many ways,” says DeVries. “Some are great designs; some are great at abstract. Some drawings have such power to them.”

DeVries realized his own creative ability at a young age.

“When I was a kid, when I was six, my brother Jack, he drew a little bit; he was the family artist. He became a writer. He made me come in and draw a picture.” Nine years old, Jack told his brother to draw a picture from a photograph that he gave him.

“When he unlocked the door, I was an artist,” DeVries describes. “That was the first birth of me wanting to be an artist. Before that I drew like any other kid- I drew doodles.”

When DeVries was in seventh grade, he started looking at comic books and drawing the figures. When he found out that Syracuse had a “great” illustration program, he applied and received a degree in illustration in 1988. His illustration career began with DC Comics where he worked under contract creating comics, advertising, video games, CD covers, toy packages.

“It was a dream come true,” DeVries states on his website. “I’ve loved art from the time I was a little kid– especially comic books.” As a professional, “I was asked to paint Spiderman swinging over New York and Wolverine slashing robots with his unbreakable claws. My job was to make these heroes real for all the people who loved them.

“I also painted monsters for Universal Studios, but those monsters weren’t as cool as the ones I saw lurking in my niece’s sketches,” he admits. “It was then, at age 33, that I decided to take all the lessons about color, action and detail and apply them to little kid’s drawings. It made me remember my childhood and also realize that no matter how old I became I could always see things like a child.”

Painting was always a challenge for DeVries, he admits, adding that he didn’t start painting until he was 21.

“When you learn things the hard way, I struggled a lot, for me I was way behind them. I struggled, but I finally got it. If I could make art simple and fun you can inspire others.” This lesson motivated DeVries into teaching, he says.

As far as monsters as his chosen object for his project. DeVries says, “I love monsters. To draw them is very freeing. There’s not a lot of restraint. With monsters, there’s really no rules. You can make things look strange and ugly. If you paint a beautiful person, you can’t deviate.”

The presentation was very engaging and energizing for both the students and staff,” says Shore. “It was amazing to see a drawing coming alive and the excitement of the students as they were a part of this.

“The students walked away from this assembly seeing that a parent from our own community is living his passion as an artist as a result of his hard work and dedication,” she continues. “Mr. DeVries was able to provide the students with a deep appreciation for art and how to think outside the box, you don’t always have to use a paintbrush when painting; he used his hands, toothbrush, and painters tape to create special effects.”

She adds, “The students enjoyed being a part of the transformation of a simple sketch coming to life.  They also were very excited that Mr. DeVries has been involved with Marvel and DC Comic world as well as other amazing opportunities like having his art work in an amusement park.  The students learned to pursue their passions.”

“I loved the assembly and at the end, I took a picture with a bunch of kids and my dad in front of the painting!” says Aiden. His friends told him, “’OMG, your dad is awesome!’”

For more information, or to schedule DeVries for a live presentation, email him at monsterbrush@gmail.com.