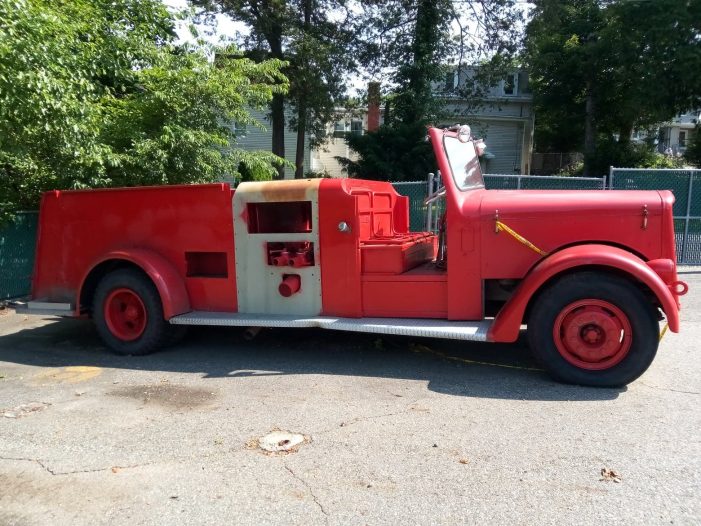 Sitting all by its lonesome off of Carey Avenue in the last parking space in the rear parking lot of the Butler Volunteer Fire Department building is an aged Ward LaFrance fire truck that may have lost its gleam in color, but still sparkles in the hearts of local firefighters.

The 1955 truck has served many purposes. In 1957, it was on the front line of fighting the major Pequanoc (Pequannock) Rubber Company weeklong fire. “This was our only pumper then,” says Richard Dean, who has been a volunteer member of the Butler Fire Department, Kinney Hose Company, for 46 years, but also from 1975 to 2009 worked as a telecommunicator at the Butler Police Department. “This pumped continuously for the first three days of the fire. Then, they decided to change the oil. It was shut down for a couple of hours, and then it resumed (pumping) for another 2 -3 days. It was also the fastest one we had at the time.” The relic has also been used as a funeral truck, transporting the caskets of deceased members with many distinguished years of service to the Butler Fire Department.

In 1976, the truck was sold to the Sussex County Fire Academy where it served as a training vehicle and a loaner engine for different fire companies in the county. It was replaced with a newer model a 1990, and the Butler Fire Department was offered the opportunity to buy the truck back – for just $1.00. “It had been kept outside,” recalls Dean, “it needed a lot of restoration work, and I think the Kinney Hose company spent $25,000 with money received from fundraisers to get it restored. It was beautiful.”

The truck was kept inside the fire house from 1990 – 1997 when the borough ordered its removal from the building and borough property. It then was parked outside in a large local yard for about 10 years. In 2009, the fire department asked a local body shop to attempt restoration. All was going well until the body shop owner sadly perished in a shipwreck, and the truck got held up in estate. Two years later, the fire department regained the truck, approached another company in Rockland County, New York to attempt restoration. A third of the work just about completed, the company then suffered bankruptcy. The fire department had to scramble to get the truck back, again, and afterwards the truck sat in storage in Oak Ridge for a few years before the borough permitted it back on site in Butler.

“As you can see,” says Dean as he walks towards the truck, “there’s some stuff missing. There are some doors missing, there’s a pile of stuff on the other side – it’s a sad situation. To get it restored again, you’re talking a lot of money.”

Some fire department members want to see it shining bright red and running once more, and a third attempt at restoration has been occasionally discussed. But for now, it rests as a large, broken “toy,” doors removed, discolored by age, and inside one of its storage compartments, courtesy of time and weather, a few green plants and weeds grow wild, the only sign of life.

“It’s part of our history,” says Dean, looking at the truck with a touch of melancholy, knowing it deserves a better fate.