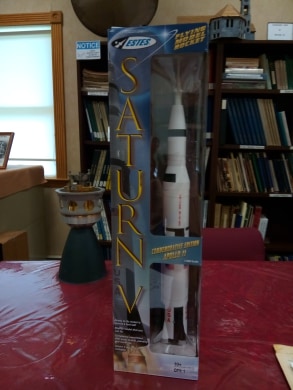 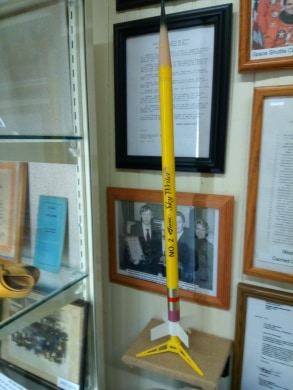 If you are interested in the United States space program, have ever wondered how rockets were made or how NASA

spacecraft takes flight, a local event has your name stamped on its invitation.

The Butler Museum will hold a “Space Day” on Saturday, July 20 from 10:00 a.m. to 4:00 p.m. Celebrated that day will be the 50th anniversary of the Apollo 11 moon landing. On display will be space related artifacts, including rocket engines from Reaction Motors, Inc., “America’s First Liquid Fueled Rocket Engine Company,” which used to call neighboring Pompton Lakes home.

A free raffle will be held for a Saturn V Commemorative Edition Apollo 11 model rocket that can actually be launched. Holding it in your hands might even transport you, even for a moment, back to July 16, 1969. On that day, Apollo 11 — manned by Commander Neil Armstrong, lunar module pilot Buzz Aldrin,  and command module pilot Michael Collins — was launched via Saturn V rocket from the Kennedy Space Center in Florida. Apollo 11 landed on the moon four days later and on July 21st, Armstrong was taking man’s first steps on its surface.

Ken Montayne, a co-chairman of the Butler Museum, speaks about the importance of the “Space Day.” “I feel it’s very important because of the 50th anniversary of the moon landing. There’s been a lot of interest generated by this.” He also states that more people should know about the contribution of Reaction Motors to the space industry.

Montayne, who also worked with Reaction Motors and initiated the July event, has been doing model rocketry since the 7th grade when he attended Butler Elementary School. “We were very popular,” he says of his class, where he and his classmates constructed model rockets under the watchful eye of their teacher, Frank Phillips. “We were in the paper all the time, launching and everything.” He then headed a 4-H club in Wayne called the Wayne Skyhawks in the early 1970s, and then had the opportunity to hop on board at Estes Industries in Penrose, Colorado as an independent marketing consultant.

For Estes he designed six rockets, one which is on display at the museum: the Estes No. 2 Sky Writer. “Here is one of my rocket designs,” he says, proudly holding it. “If I have the parts, I can come up with a design and name in no time.” It resembles a No. 2 pencil, with replica eraser and sharpened lead point. “This will go up in the air, it has an engine, and it’s electrically fired from a safe distance, and there’s a charge in there that blows the parachute out of the front, and then it comes down.”

“Filled to the brim,” says Montayne when asked how filled his garage is with rocket and Apollo related memorabilia, some of which will be on display on July 20th. He is fortunate enough to be good friends with Frank Winter, former curator of the National Air and Space Museum. “I’ve got tons of original NASA pictures, documents that you can’t get nowadays because  they will not send you anything; you’ve got to get it online. I’ve got the original stuff.”

The Butler Museum is located at 221 Main Street in Butler. There is no entry fee.