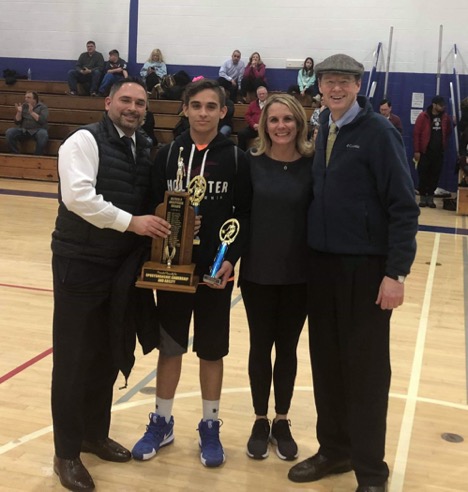 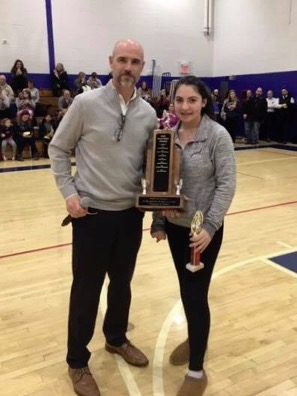 Caldwell’s Grover Cleveland Middle School students know a thing or two about sportsmanship.  Students Luke Maida and Lina Minichino earned the honorable awards on March 6 for the 7th & 8th Grade Basketball League First-Year Awards, given to one male and one female recreation basketball player for outstanding sportsmanship, leadership, and ability. All recreational basketball teams in the area were considered by league coaches and other officials who voted on both the boy’s and girl’s awards, and judge not only on the students’ ability to play basketball well but, and maybe even more importantly, on said students’ clearly displayed grasp of sportsmanship and leadership qualities.

“It’s an honor to be chosen when there are so many deserving players,” said Luke Maida.

Luke’s mother Nikki also expressed how very proud she is of her son and his win.

“I’ve always pressed upon my kids to be humble and kind, and this reward shows me I did something right,” Nikki stated. “Winning or losing means nothing, because when you play recreational it’s more about teamwork and everyone playing together and having fun, and not so much about constantly scoring and winning,”

West Caldwell Councilman Michael Crudele, who presented Lina Minichino with the award, said that he was lucky to

watch her play, improve, and grow as a recreation basketball player for the past three years, and also how she exemplifies the definition of teamwork and sportsmanship.

“After many years coaching recreation basketball, and getting to know Lina quite well, it was my pleasure to present her with the Kay Slattery award. She’s a great young lady. A hard worker on the basketball court, always positive, always cheering on her teammates – and her competition – and always ready with a smile. Lina epitomizes the true definition of sportsmanship,” shared Crudele.

“I try my best to be a good team player, work hard, and have fun, and I am very happy to have received this award,” Lina said.

Sportsmanship is perhaps the most important quality in sports and competition: To paraphrase the old saying, win or lose, it’s all about how you play. A strong sense of fairness, respect, graciousness, and generosity towards your teammates, as well as your opponents, is what sportsmanship is all about.

Good sportsmanship is also extended toward the coaches, officials, parents, and fans, and should be practiced by all. And it is undeniably a very good thing that over the past few decades, embracing and teaching true sportsmanship has become much more crucial to children and adults than years past when bullying and teasing were more accepted and blandly tolerated.

“It was such a proud moment to see her accept this award,” Lina’s mother, Pattie, shared. “Lina works hard and gives it her best all the time. She has enjoyed playing basketball, but she has enjoyed being part of a team more. As Mike said, Lina cheers on her classmates whether they’re on her team or not,”

Good sportsmanship means showing generosity, respect, and fairness toward each other, but it’s also important to have a positive attitude, give your greatest and best effort, always shake hands with your opponents before and after the game, verbally support teammates on both sides by saying out loud “nice try,” or “good shot,” and never criticize any team member on either side. Being a good sport means to accept the judges’ and officials’ calls and decisions, and to never argue with them. Show respect to the opposing team and never tease or bully anyone, always follow the rules, address when another player has fallen or slipped and help them up (younger sports teams are encouraged to “take a knee” and kneel down where they currently stand at play when a member has fallen or gotten hurt), take pride in winning but don’t be obnoxious or rude by rubbing it in. By the same token, accept a loss without whining, getting angry, or making excuses.

By being a good sport, you learn respect for others as well as graciousness, acceptance, and self-control, which arguably can help you manage many other aspects of your life as you grow. They’re also key skills toward becoming a mature, respectful, and successful adult. As far as receiving an award for such a good human character? As Nikki Maida shared: “The greatest honor one can receive is one of leadership and sportsmanship.”