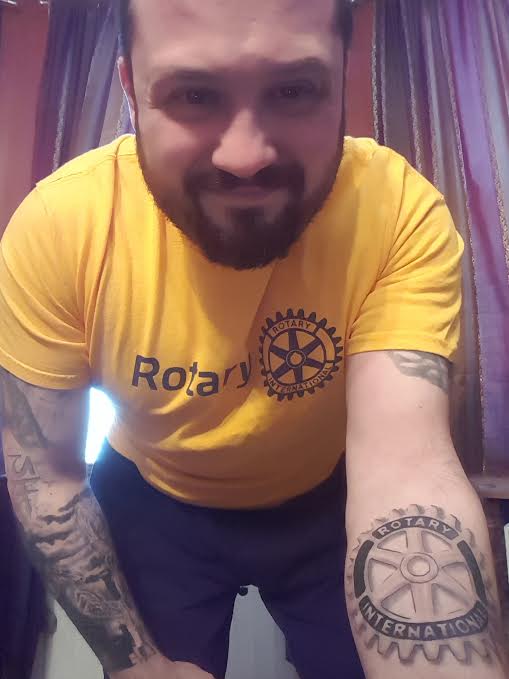 Chartered in 1951, the Rotary Club of the Caldwells has a long history of successful fundraising, implementing service projects and supporting many local and international charities.

There are approximately 1.2 million Rotarians in 167 countries, but there is probably only one Rotarian who wears a tattoo of the Rotary International on his arm.

Anthony DeLuca, a Bloomfield resident, and Kearney Banking executive was a member of the Rotary Club of the Caldwells and says the club’s words, “Service above self…” are not just hollow praise. The proof is tattooed on his arm.

Deluca’s tattoo shows the Rotary Club’s distinctive logo on the underside of his left arm. “You don’t get more dedicated than our members,” said one member.

Deluca joined the Rotary Club in 2014 and told the Caldwell News that he got his tattoo on Feb. 6.

Deluca spent his first day as a Rotarian at Camp Merry Heart Service Day, alongside other Rotary Clubs, he recalled. “From that point on, I was hooked.”

“They were just so warm and accommodating, they made me feel like family. I just loved what they were about. It reminded me of all the things I used to do in my younger years.”

“I’ve always considered myself a humanitarian,” said Deluca. “When I was younger, I would participate in my church’s outreach programs. From there I continued trying to help people.”

“I was just so hungry to do that as an adult but I wasn’t finding any opportunities and suddenly there it was! Rotary became like a second family to me.” Deluca said.

“Rotary is one of the greatest things to have come into my life. To have the opportunity to help others locally and internationally is simply amazing; the possibilities are endless. To say I am surrounded by such wonderful people is an understatement. As fellow Rotarians and I say, ‘It feels good to do good.’ I have made solid connections, bonds and family members through this amazing organization, all while impacting the lives of those in need. I apply Rotary’s 4-Way Test in my professional and personal life, which has served as a moral compass for me.”

After college, Deluca became a volunteer firefighter for two years but had to give it up because of an injury.

“From there I looked around and said well now what? I started my career in banking and when I went to Kearny Bank the first thing I did was look for a Rotary Club because it just means so much to me. The signs were all around town with their logo and where and when to meet. I reached out and started asking questions. It turns out that the club had dissolved years ago. There wasn’t a succession plan, and the charter had expired and that was it.”

“I said to myself well I’m here in town and I’m making some good connections why not just start a club?”

Since working out of Kearny, Deluca has spearheaded the creation of the Kearny Rotary.

“The first couple of months it was tough. It was mostly prospecting and educating the people on what Rotary was. We held our first meeting in December 2017. It was a monthly effort to get people acclimated. Eventually word spread and it grew.”

Deluca expects the charter for the Kearny Club to be approved in late April or May.

Before Deluca left Caldwell, they had a service project in the Dominican Republic where they had built a clinic. “We held a grand opening and did a diabetes screening. We were meeting people in a very impoverished area who needed help and we were there for them.”

“We visited the local school house. The children had no shoes, and everything we looked at was in shambles. The roof had holes in it. The library had bookshelves that were broken. They had a few books, but they were very old. The restroom was a shack outside leaning over ready to collapse. It just broke my heart.”

“We had a small party and we were singing and dancing with them. The kids just couldn’t believe it. There was one little boy, maybe six years old. He pulled my shirt to get my attention and he reached in his pocket and gave me this individually wrapped piece of hard candy. I knew that this was the only thing he had, and he wanted me to have it. It was his way of saying thank you. I still have that piece of candy and will never give it up. I’d like to do something like that with our new club.”