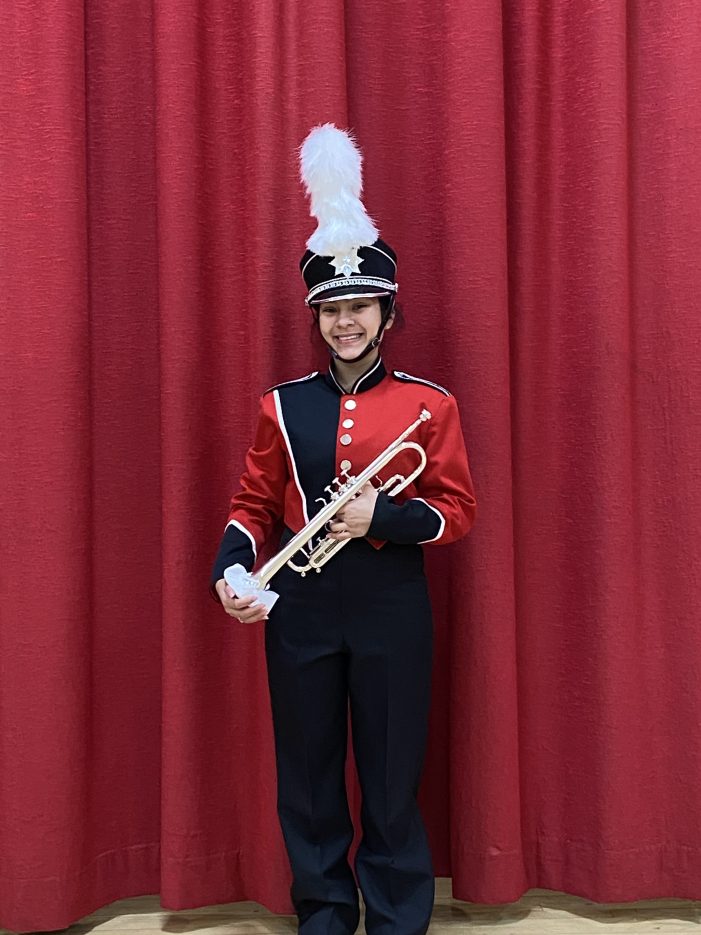 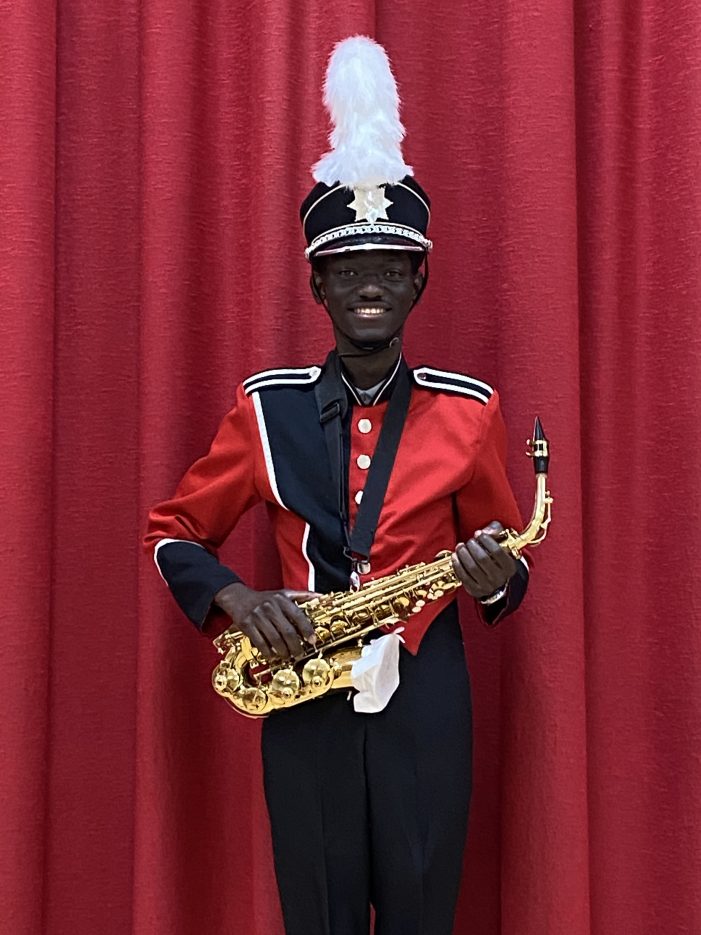 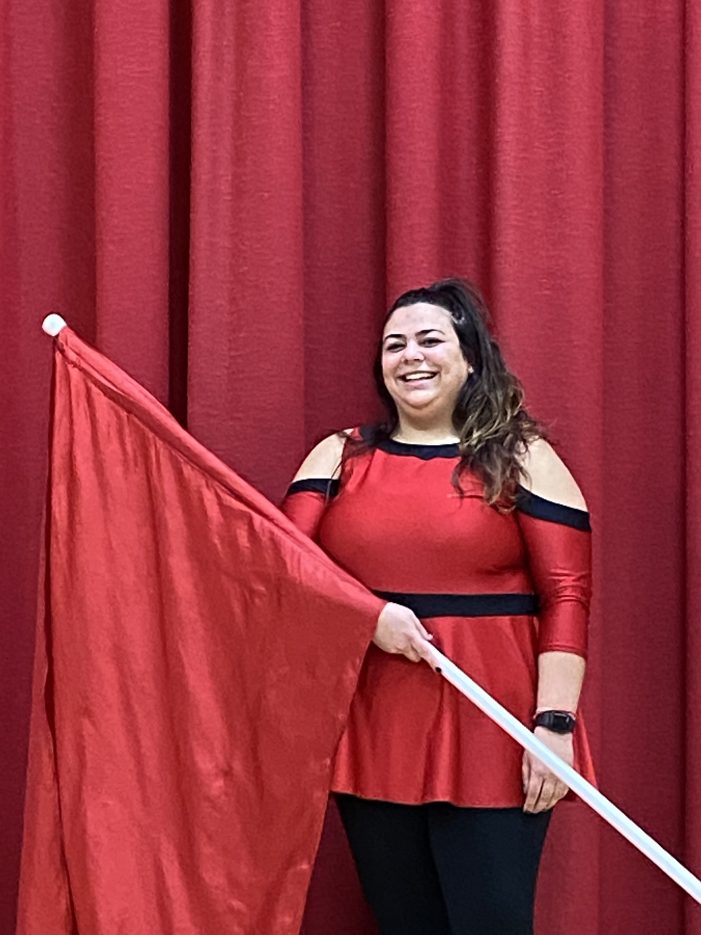 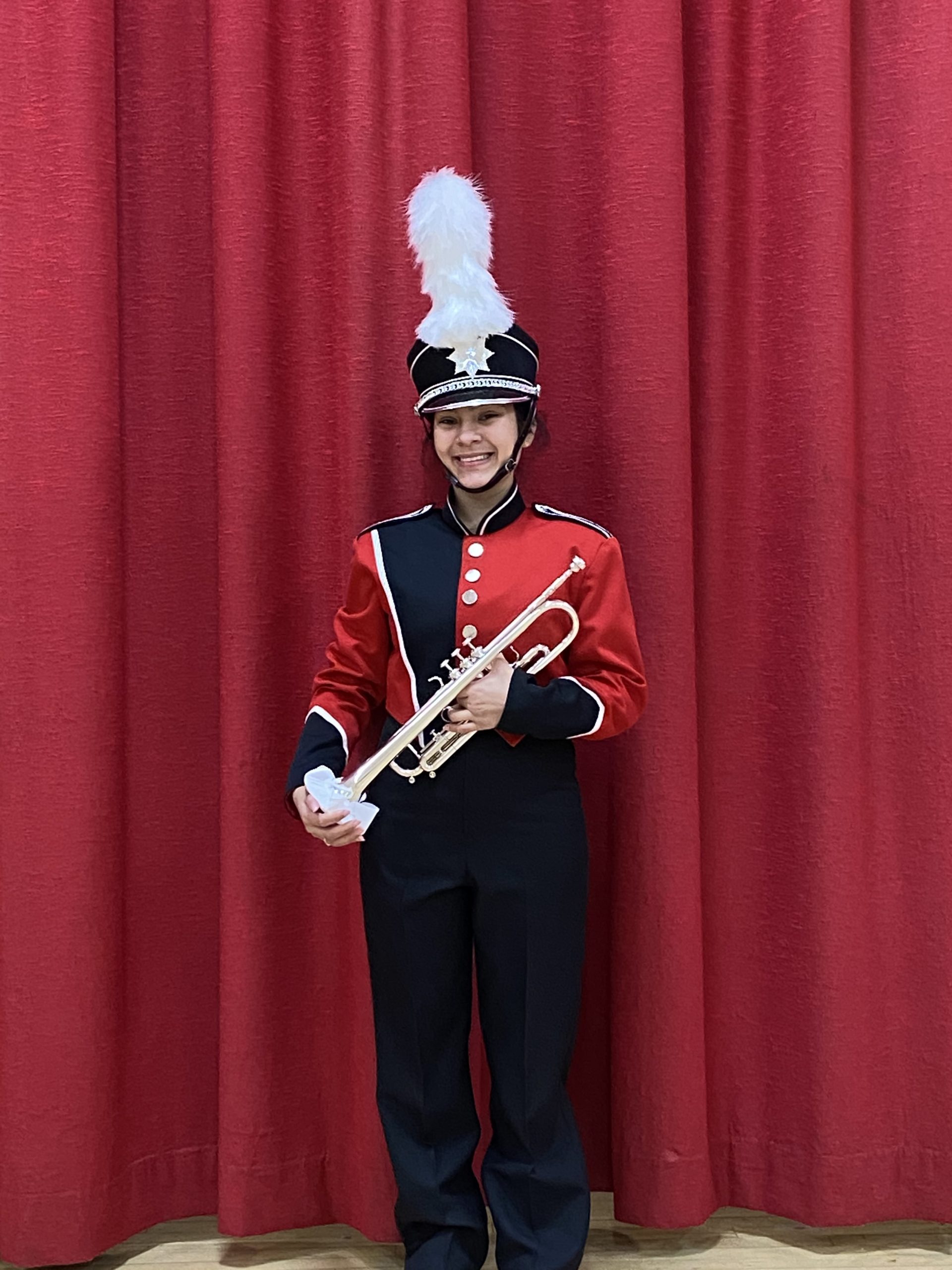 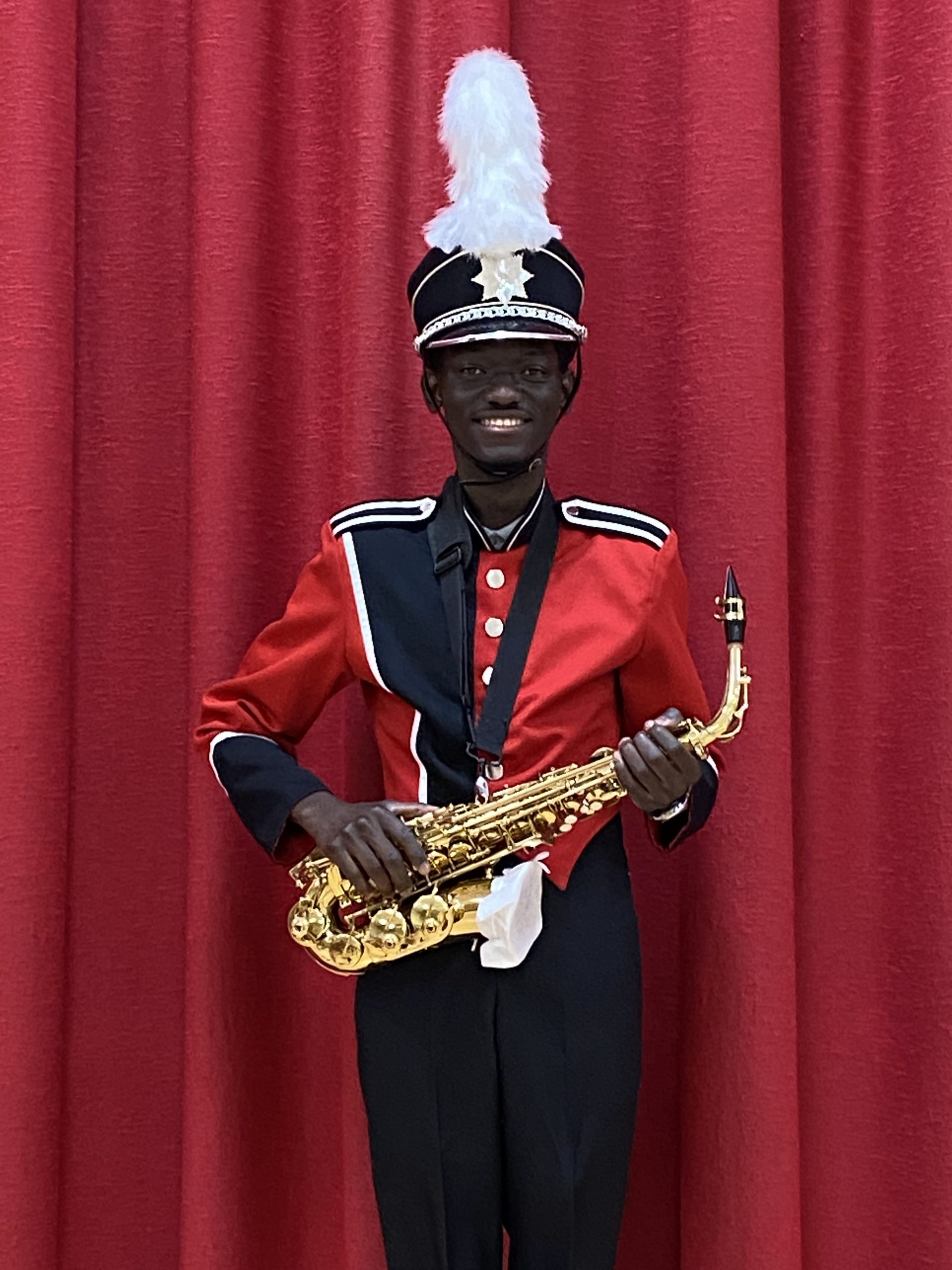 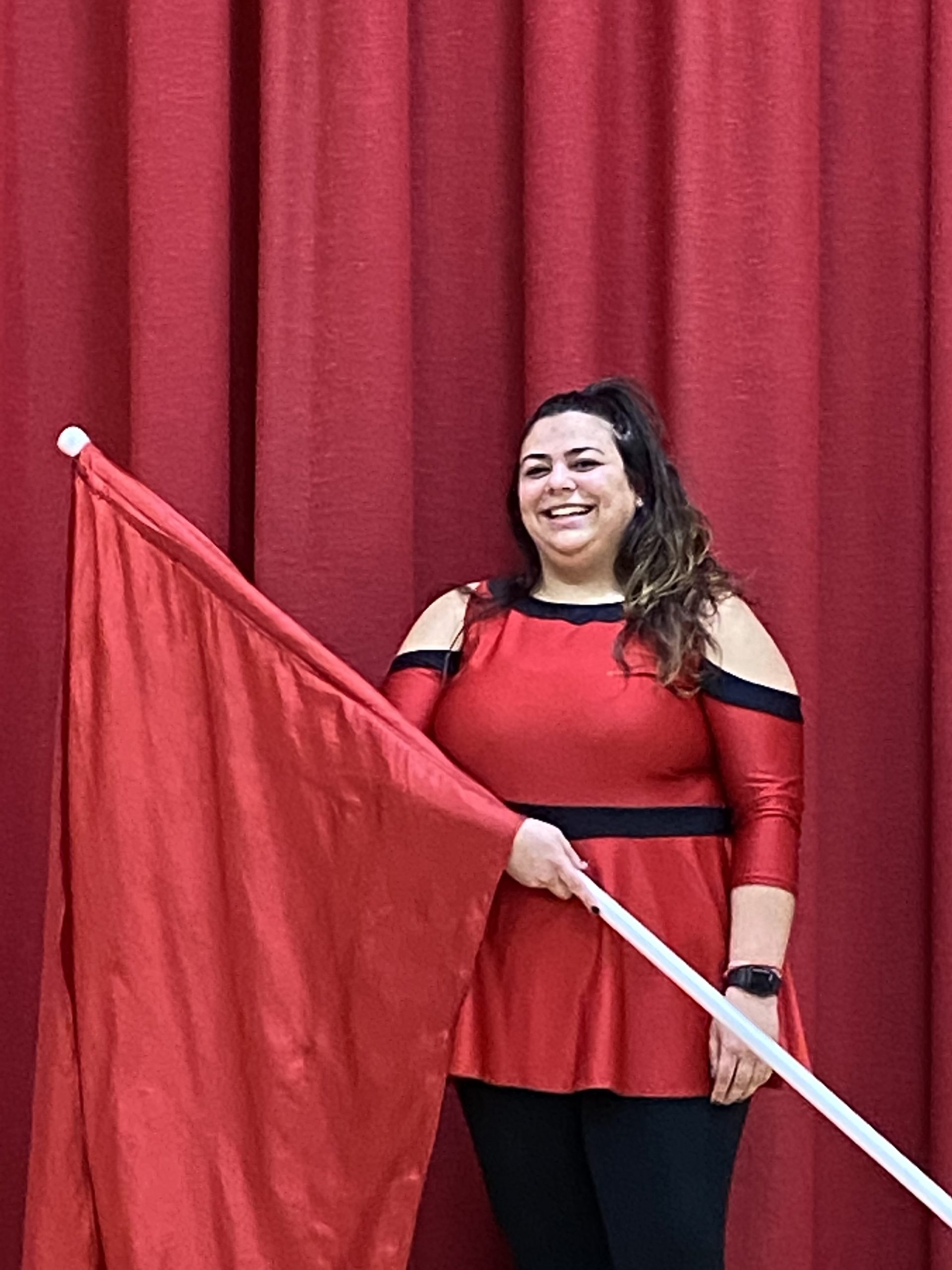 The Caldwell University Marching Band is proud to announce that three students will be performing in the College Band Directors National Association (CBDNA) Intercollegiate Marching Band (IMB). They will join nearly 1,500 performers from 200 bands in 45 states and Puerto Rico, all working together to produce a virtual college marching band show.

Congratulations to the following performers from the Caldwell University Marching Band:

“This is a very exciting opportunity for our three students and I am thrilled that they are participating in the virtual band,” says Marching Band Director and Associate Professor Rebecca Vega.

Joining in unity during a time when college marching bands have been forced to the sidelines, the CBDNA Intercollegiate Marching Band will keep the spirit alive by performing virtually together. This unique project will combine college marching bands from different confer­ences, regions and styles in a single performance.

The Intercollegiate Marching Band will perform “End of Time” by Beyonce in a video that will premiere online during halftime of the College Football Playoff National Championship Game on Jan. 11, 2021.

“This is going to be a historical performance,” says Dr. Mark Spede, president of CBDNA and the director of bands at Clemson University. “In this unusual year when bands have been unable to perform their traditional pregame and halftime shows during college football games, CBDNA is pleased to offer this opportunity with the help of its partners.”

The IMB performance will showcase all of the unique aspects of a college halftime show including musicians, drum majors, color guard members, dancers, and majorettes.

“During these challenging times, we are excited that CBDNA, along with some amazing partners, can offer an event so positive to collegiate band programs across the country,” says Barry Houser, chair of the CBDNA’s athletic bands committee and director of the Marching Illini at the University of Illinois at Urbana-Champaign. “Many students in college bands have been forced apart due to COVID-19, but the virtual Intercollegiate Marching Band will be an event that will bring together nearly1,500 college marching band students, unified as one band.”

The Intercollegiate Marching Band also brings together professional talent from across the marching band industry. Composer Scott Boerma, director of bands at Western Michigan University and past arranger for the Madison Scouts Drum and Bugle Corps, and Chuck Ricotta, percussion instructor and arranger for the University of Michigan, created the arrangement for “End of Time.”

“In our effort to create an arrangement that will appeal to band members and fans across the nation, we chose a tune by the incomparable Beyonce,” Boerma says. “Although our arrangement of ‘End of Time’ stays true to her work, we’ve beefed it up to make it challenging and exciting for the marching band genre.”

Michael Rosales, choreographer for the 2018 Santa Clara Vanguard Drum and Bugle Corps and the 2018 Paramount Winterguard, and Lexi Duda, a national- and world-champion twirler previously with the University of Maryland, designed routines for the visual performers.

“Being the creative director of The Breakdown Camp, our goal is to nurture the passion of young artists,”Rosalessays. “I chose to be involved with the CBDNA Intercollegiate Marching Band virtual show because it’s a great opportunity to give back to these artists and keep them engaged and involved through this difficult time. I want them to know that they are important and that their art form is necessary to the world.”

Our Virtual Ensemble powered by GPG Music is the IMB’s presenting sponsor. All bands will be using Our Virtual Ensemble to practice music and routines as well as to submit individual videos. Editors at GPG Music will produce the final video. “The mission of GPG Music is to help music educators inspire the next generation,” says Steve Martin, chief executive officer and composer. “We enjoy any opportunity to support an effort that aims to bring camaraderie and unity to the music community. Not only does this project offer the chance for students to collaborate with fellow participants from far and away, but it may also be the only way that some of them have to perform as proud members of their school’s marching bands.”

GPG Music, a publisher of marching band, indoor percussion, and concert band music, started Our Virtual Ensemble in the spring of 2020 as a direct response to stay-at-home orders due to the COVID-19 pandemic. The robust, plug-and-play system creates “opportunities for performing arts ensembles that may not be performing regularly or even meeting in person at all,” Martin says.

Since then, Our Virtual Ensemble has produced more than 100 virtual performances on behalf ofmiddle school, high school, college and community bands, choirs, and orchestras.

The IMB originated as the brainchild of Jeremy Williams, owner of GuardCloset.com and creator of StylePlus.TV.“This performance will show the whole country what marching band is really like, a great group of students and directors who work hard to achieve an amazing goal and who don’t let anything stand in their way,” Williams says. “I hope this project enlarges the sense of community that these students and directors already have by bringing everyone together in one show. We are striving for a larger community to bring awareness to the arts,a community that lasts long after this year is over,a community that grows and grows for all marching arts students.”

Halftime Magazine and CollegeMarching.com are also founding partners for this project. “Many marching bands have found creative ways to stay engaged during the COVID-19 pandemic, and we’re proud to be part of a large-scale project that allows college performers to showcase their talents, bringing the sights, sounds, and spirit of the marching arts to fans worldwide, “says Christine Ngeo Katzman, publisher and editor-in-chief of Halftime Magazine.

According to Michael Barasch, co-founder of CollegeMarching.com, “An unprecedented time called for an unprecedented opportunity, and we are thrilled to be part of this project.”

The CBDNA welcomes additional corporate sponsors and is kicking off a fundraising campaign through FansRaise to fund the IMB as well as raise donations for the CBDNA Mike Moss Conducting Fellowships, providing underrepresented populations the opportunity to participate in a summer conducting symposium. Visit imb.fansraise.comto contribute.

“I hope that this project keeps our band programs and teams across the country in the forefront of collegiate performance, education, and sports activities as well as brings more happiness to the audience and spectators,” Rosales says. “Let’s keep the spirit alive!

The College Band Directors National Association is a grassroots organization that serves a wide variety of constituents from the conservatory wind ensemble to the athletic band to the small college band and everything in between.