Caldwell University Student Celebrates “Once in a Lifetime” Adventure 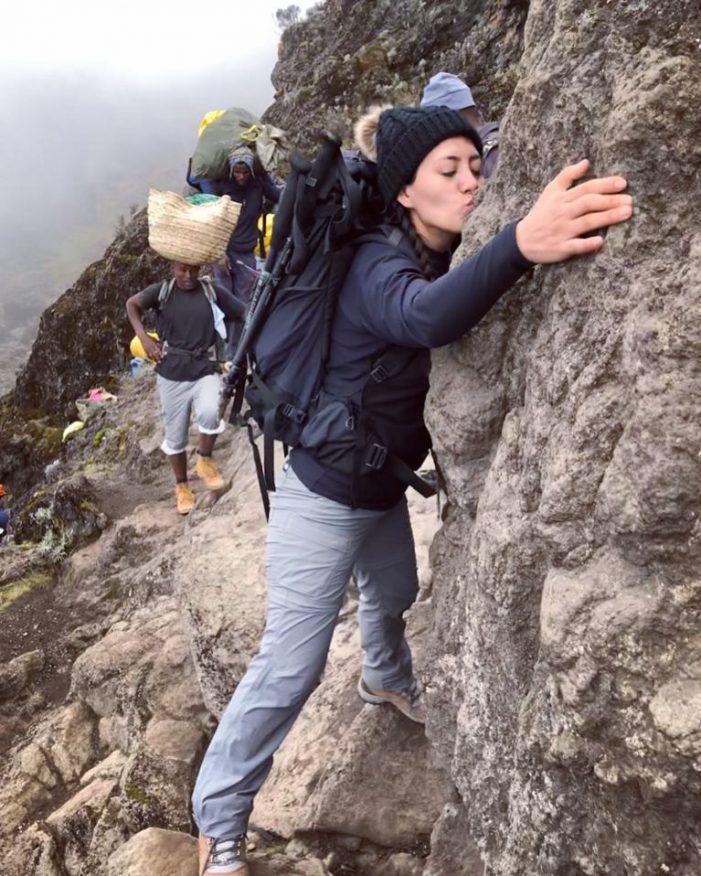 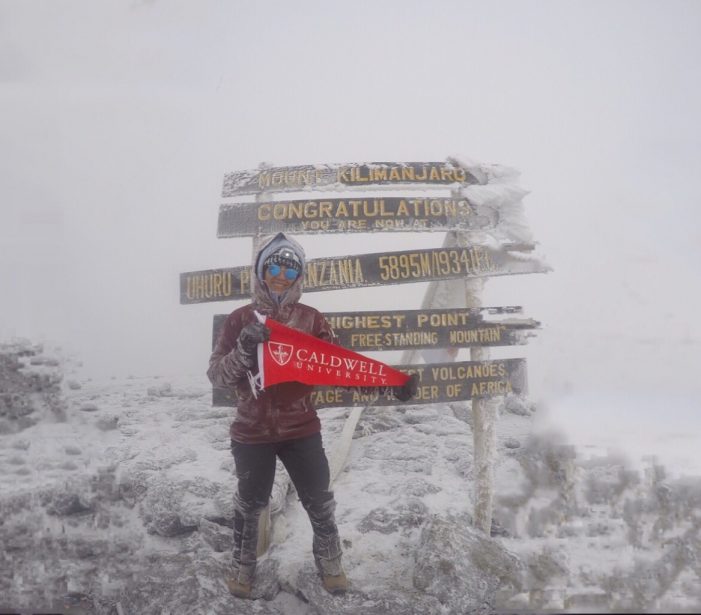 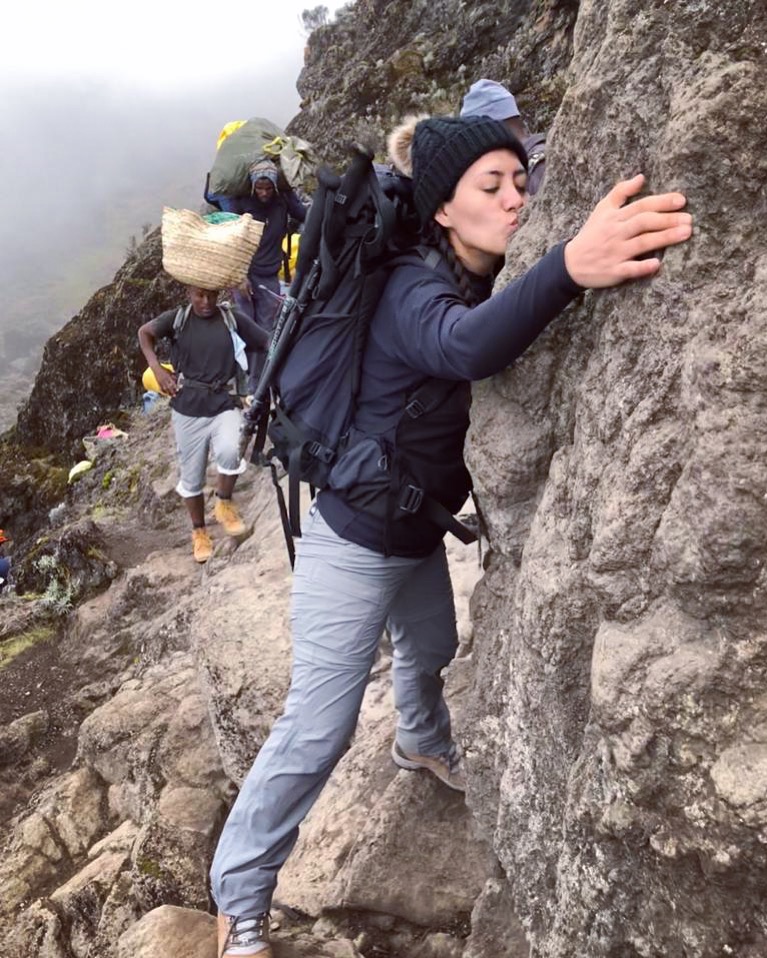 Jessica Arebalo, a senior at Caldwell University, doesn’t know how she juggles it all. She’s the mom of a 4-year-old child, commits to a schedule of studies, and works a full-time job as a 9-1-1 operator.

“I frankly don’t know how am able to manage all of it,” she says, but then explains how. “I focus on what I can accomplish each day. I do some school work at work, but sometimes the 9-1-1 system is busy, and I cannot complete any work, but it sure helps.”

With her school break approaching, you’d expect Arebalo to kick back and maybe rest somewhat. She, however, had other ideas. “I knew spring break was coming and I had a two week gap of no school, so I planned it. I took time off from work and booked the trip.”

That trip was an excursion to climb Mount Kilimanjaro, Africa’s highest peak at 19,341 feet. “It was my form of reset,” says Arebalo, who is majoring in Social Studies and minoring in Criminal Justice at Caldwell. “I wanted to start fresh and with a new mental state to take six classes in the spring semester. I know most people would have chosen the Caribbean, but I like to do non ordinary activities, travel in a unique way to be able to experience “life.’”

Arebalo is no stranger to challenges, previously taking part in Spartan races as a test of agility and stamina. “The last Spartan race I did before the summit tested my mental state as it was in Vermont, at Killington Mountain (over 4,000 feet). It was my first-time experience of the notion of ‘mind over matter,’ but I finished.” She has also challenged herself other times as well. “I have never been scared of high altitudes. I, in fact, have done skydiving, bungee jumping, rappelling down waterfalls, and long-distance hikes.”

Upon arrival, viewing Mount Kilimanjaro from the distance was not imposing. Quite the opposite. “It gave me this emotion of fulfillment, or achievement even though I haven’t done it yet,” she recalls, her mind at that time processing the expected end result. “I guess it was because I was there in Tanzania – it was in front of me , it was no longer a thought but a reality.”

The biggest challenge was the fear of not finishing. “Not because I couldn’t but because my body could not. We want to apply that theory of ‘mind over matter’ but we know our bodies and we should not push to a point of severe damage. For example: altitude sickness is not up to me. If my body did not adapt, I would have had to end the hike. I cannot risk pulmonary or heart edema and potentially die (on the way) to (the) summit.”

During the seven-day trip and climb, which Arebalo made with three other people, she succeeded in reaching the lowest peak, and after that, there was no doubt she’d reach the highest. “The more I advanced the more I knew my body was adjusting and the risk of altitude sickness decreased.”

And when she reached the frosty apex, she had a surprise: a bright red, Caldwell University banner to unfurl. It had been planned since the fall 2018. “I was talking to my advisor, Roxanne Knott, about the final requirements to graduate. While chatting, she asked me about my plans for Christmas and I mentioned I am working the holidays. She gave me an ‘awe’ to which I replied, “But during spring, I will be summiting Mount Kilimanjaro in Africa.’ She thought it was fascinating and asked if I would mind taking a school insignia and take a picture at the summit. She was very encouraging!”

And now the world knew of Caldwell University – from atop Mount Kilimanjaro.

Can a dream come true? ABSOLUTELY!! 2 years ago, I became enamored with Everest. The feeling the climbers expressed when they summited was inexplicable. To be realistic, I knew Everest was quite a stretch, but I wanted to experience that feeling!!! Being at the top of the world…that sense of achievement and glory!  So I embarked on a search to summit the next best thing! And Kilimanjaro was it! One of the highest 7 Summits in the world! I can do it?! Even with doubts I bought the plane ticket to Tanzania and began my journey to conquer and summit Kilimanjaro, a volcano that’s due for eruption.  One of the hardest things I have ever done! I pushed myself past a physical and mental breaking point! Our minds are powerful and I tested that theory. Despite the dizziness, stomach ache, back pain and climbing after midnight in pure darkness, I distracted my mind and summited Mt. Kilimanjaro! At 7 a.m., I reached the top and I felt that! That sense of freedom, tranquility and glory! I never meant to inspire others, but I am happy my family (daughter, mother, sisters, nieces, …) feels proud and inspired to dream and achieve! I was once above the clouds and, although 9 thousand + ft shorter than Everest, on top of the world!

“Maybe in the future, once I have my career settled. Who knows? But I would definitely go for another of the highest seven summits.”