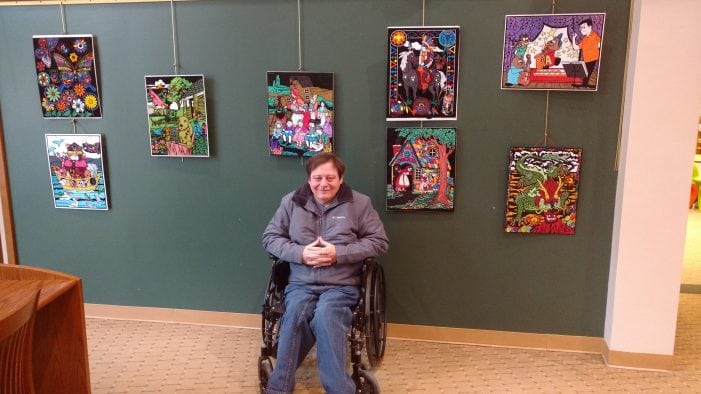 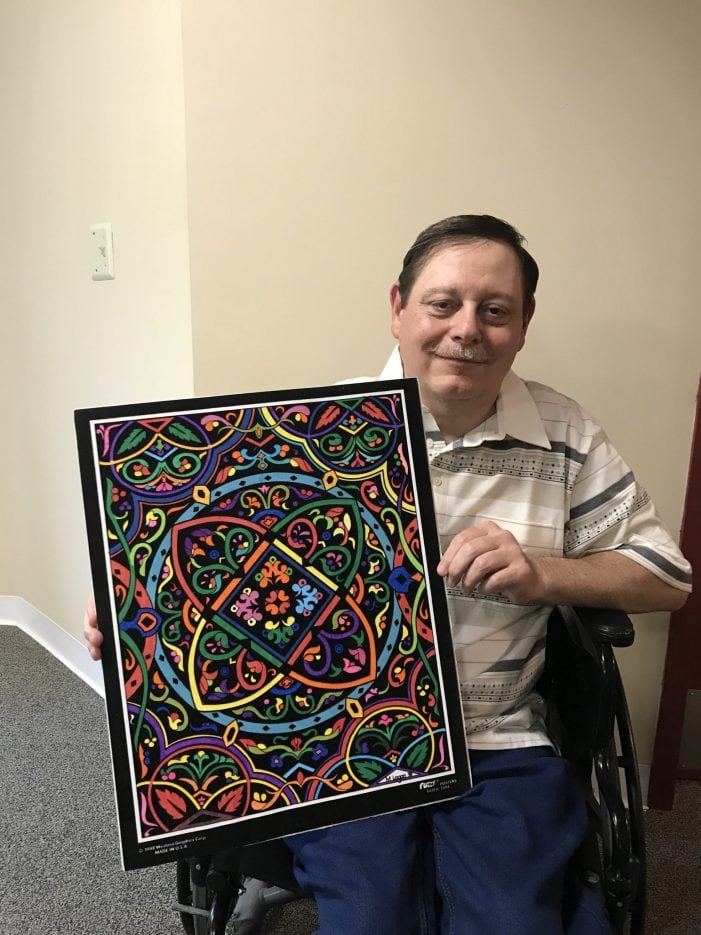 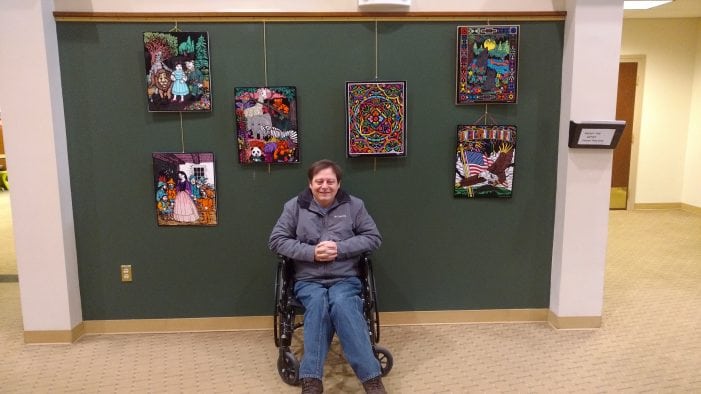 By Cheryl Conway
When it comes to colors, creating and themes, the possibilities are endless for one local artist whose art was featured this past year at the Chester Library and may be popping up at other places in the future.
Hugo “Butch” Cabrino, 54, of Chester has been an artist of Fuzzy Art for the past 36 years but it was not until recently that he realized people really do admire his work. During the month of February, 12 of his finest pieces were on display at the library and seven were actually sold by those who took notice.
As a resident of Chester Senior Housing for the past three years, Cabrino lived in Roxbury for the 14 years prior. Born with Cerebral Palsy, Cabrino has faced challenges in life but has also found a balance to stay busy and maintain a positive attitude.
“I had it all my life,” says Cabrino regarding Cerebral Palsy. “In my case I was told it affected hamstring muscles in my legs and to some degree I did have it in my hands. I walk on forearm canes; hence I had to find something to entertain myself in the cold months. So I turned to Fuzzy Art to have something to do besides the computer and the memorabilia that I collect.” 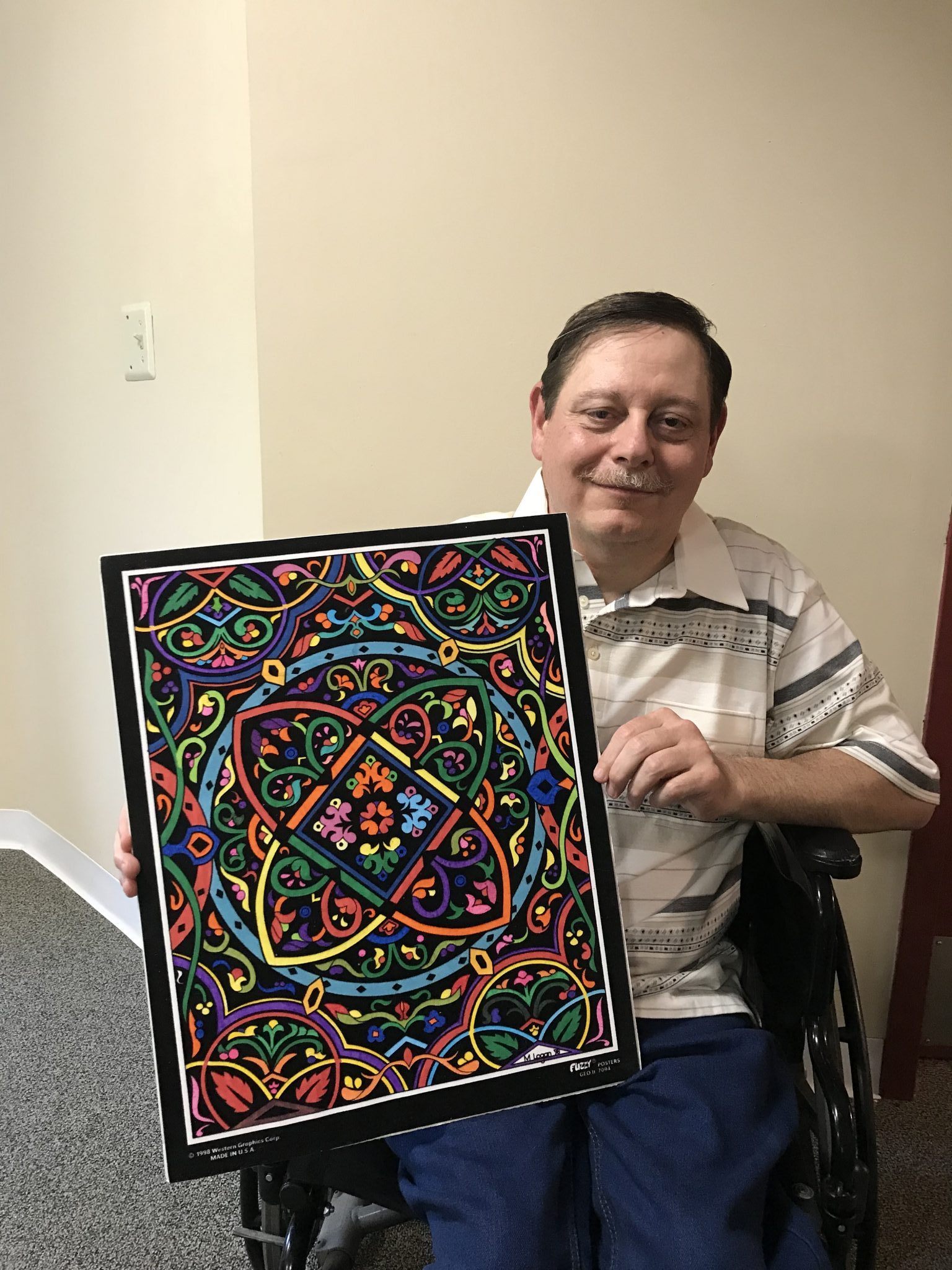 Cabrino’s work with art began more than 30 years ago when he lived in Pennsylvania. “It’s called Fuzzy Art because it has a felt background,” he explains. “I have thousands and thousands of
different markers that I use. As long as I can keep myself busy I can do pretty well.”
He buys the prepared pictures, about 16×20 inches, already with the felt background and then colors them in all different colors and patterns using “the imagination as far as the colors go.” Some pictures can cost him $5, except when he buys them in bulk, but “to me it’s worth it as long as it keeps me busy especially over the winter when I have a lot of down time.
“I have such an extensive collection; it’s hard to say how much I have,” says Cabrino. Themes are vast and include animals, birds, city scenes, famous bridges. “That’s part of the fun the variety you can get.”
Completing one picture can vary time wise. “I may start one, put one aside then decide to eventually go back to it,” says Cabrino. Average picture can take about three days for him to complete.
As far as art classes, Cabrino is self-taught. “It’s strictly based on freelancing and imagination,” he says. As a matter of fact, he was once discouraged by his talent.
“When I was in grade school my teacher I had failed me in art,” says Cabrino. She told him ‘I don’t think your art career will ever amount to much.”
Cabrino has proved her wrong as “a lot of people told me they like the subjects, they like the color.” Cabrino prefers to use metallic for his colors, but the selection is limited and can cost more money.

“I know I’ll never be Picasso, I’ll never be van Gogh. I have my little niche so to speak,” he realizes, especially when his work catches another eye such as Joy Franz-Kin this past winter.
“Joy saw some of my work,” shares Cabrino. “She was talking to me about the work; she said I have an idea. They exhibit things in the library. She said ‘it may sound funny; I’d like to do the same for you.’ I thought she was joking. I don’t have a reputation; I’m not an established artist. She said she knows someone in the library and they have a spot. I thought maybe I can make this thing fly.”
Sure enough, the library called Cabrino and offered him a month to display his work.
“It was all very positive,” says Cabrino. “People would look at the work hanging on the wall and had some really nice things to say. The kids were really taken by it. I did get seven people who actually called
me and I was able to sell to them; I made arrangements to meet them in the library and make a deal so to speak.”
Cabrino sold his pieces for $10 apiece and has many more for those who are interested. He hopes to have another display sometime in the future. “I have plenty of work to display,” he says.
Cabrino says about Franz-Kin, “She’s been my biggest supporter, my biggest fan.” Franz-Kin, who says she met Cabrino at a Lunch-n-Learn at Congregation Church in Chester, and again while visiting her three friends at Chester Senior, is most impressed by Cabrino and hopes to get his work displayed at other venues such as hospital hallways.
“I think he’s a wonderful man,” says Franz-Kin. “I told him ‘I’m not finished with you yet.’ He was born with this disability. I’m just so proud of him. He still goes forward and smiles. He goes on with his life and doesn’t say ‘poor me, poor me.’ He’s a good man.”
Whether his displays continue or not, either way he plans to keep creating. 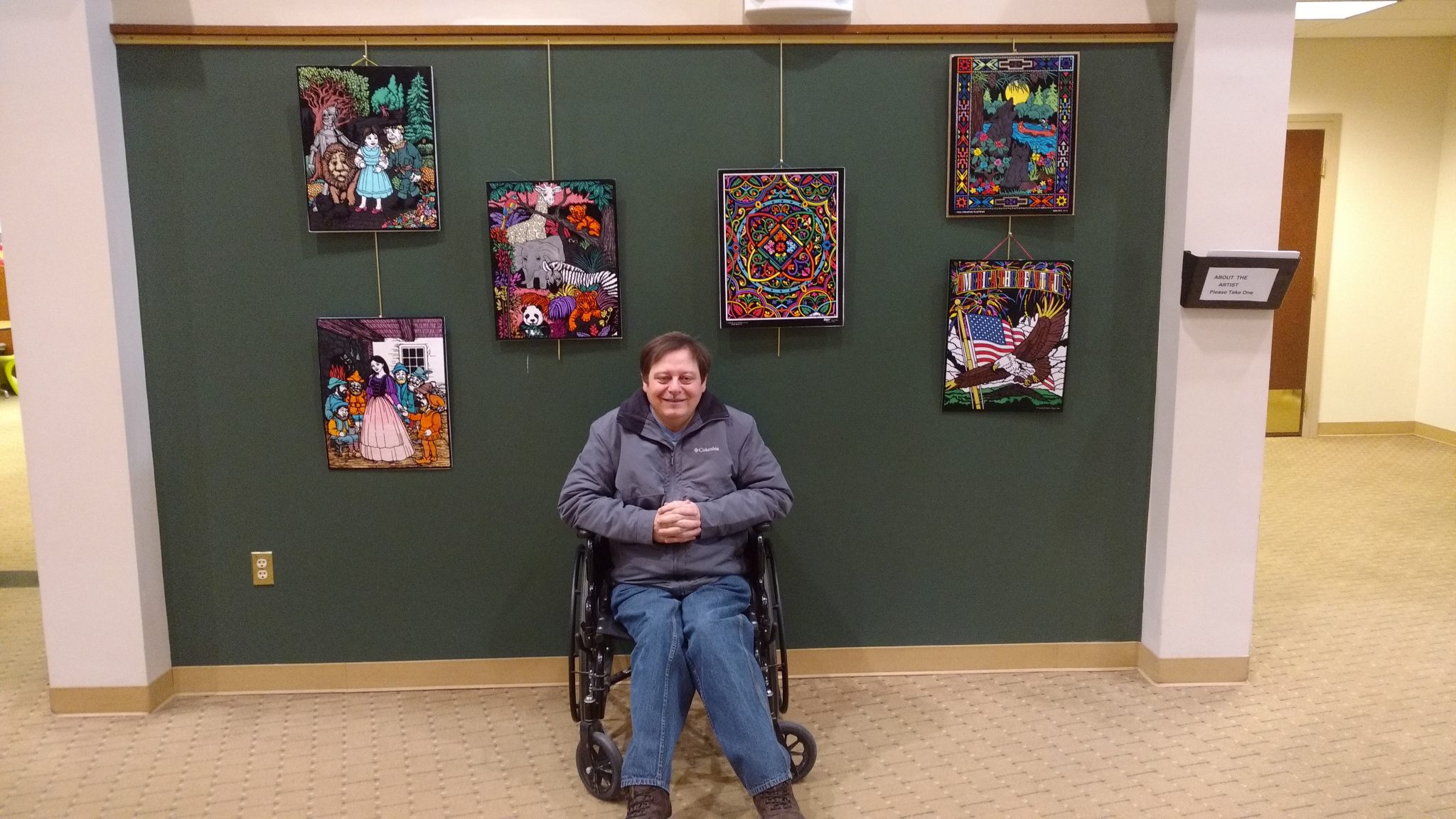 “The idea that I can do it, it’s a lot of fun; it keeps me from getting bored,” he says. “I like the idea you can work with so many colors. You get to see the finished product; after all the work that you’ve done, it hopefully puts a smile on your face.”
Growing up Cabrino says he had to take special education classes, but as far as a degree, “never really finished,” he says. “It was such a struggle for me, I got to a point where I couldn’t handle it anymore. I
got to ninth grade but I couldn’t handle it anymore.”
While he does not have a profession he says “I try to do normal things that everyone else does, sometimes it gets a little harder because of my disability,” especially during the winter.
“I’m into my artwork,” says Cabrino. “That’s something that’s basically a winter activity in case I get snowed in. I’m not one to go out in the winder in the bad weather. It just gives me something to do, I don’t get depressed. I like to throw myself into something; that’s the type of guy that I am.”

Besides his art, Cabrino enjoys sports particularly the Mets for baseball, Giants for football and Pittsburgh Penguins for hockey, as well as collecting baseball cards and sports memorabilia.