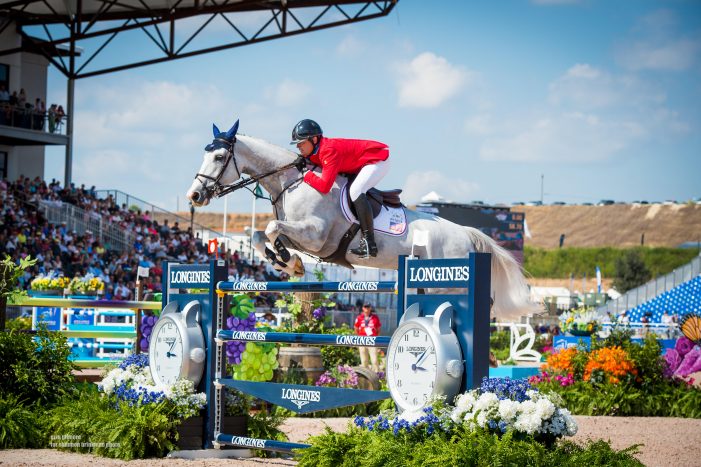 In 2013 Lori Larrabee, owner of LL Show Jumpers LLC, embarked on a quest for a young showjumper and purchased a four year-old Dutch Warmblood gelding who she renamed Eddie Blue. Lori chose Eddie at the urging of her long-time professional rider, Devin Ryan of River Run Stables in Long Valley. He has built his riding career on developing young horses and can instinctively gauge their potential at a young age.

Eddie showcased his talent as soon as Devin began working with him. He jumped remarkably high over fences, was extremely powerful and consistently performed well. He became an immediate sensation on the jumping circuit.

Eddie’s next triumph was in April when he won second place overall at the Longines FEI (Fédération Equestre Internationale) World Cup Jumping Final in Paris. It’s rare for a horse to place second at a World Cup during his first season of indoor events. He was also the only horse to not knock down a rail the entire four days of competition–quite a feat as he was just nine years old and up against the best horse and rider combinations in the world!

Said Larrabee, recalling that moment, “Devin and Eddie jumped that final fence in Paris and I had the stunning realization of his 2nd place finish. Then I immediately got a call from a friend and top horse person in Europe. He said ‘Lori, for today you own the best show jumper in the world!’ My friend was referring to Eddie being the only horse to keep all the jumps up–a tenth of a second time penalty early in the competition was his only ‘fault’.”

A month later Eddie and Devin took third place in the $225,000 Sapphire Grand Prix of Devon CS14 in Devon, Pennsylvania. Devin praised Eddie as being a natural competition horse even as a youngster. “As soon as he walks in the show ring his ears are forward and he performs. Even as a young horse he always knew where his feet were and where the poles were.”

Following their performance in Paris, Eddie and Devin were placed on the shortlist for the FEI World Equestrian Games (WEG). Horse and riders shortlisted are entered into “observation” competitions over the summer in order to assist U.S. Showjumping in choosing their final selections for WEG. Eddie and Devin, along with the U.S. team, won the bronze medal in the Longines FEI Jumping Nations Cup in Sopot, Poland in June.

They then jumped a double-clear (two jumps without any jump or time faults) in the Mercedes Benz Nations Cup at Aachen, Germany, one of the most prestigious venues in the world. Eddie and Devin went on to be part of the FEI WEG NetJets U.S. Jumping Team. He helped the U.S. jumping team to win Gold for the first time since the World Championships began in 1986.

Eddie’s final competition of 2018 was the November $205,000 Longines FEI Jumping World Cup in Toronto for the Hickstead Trophy. He placed second.

Larrabee credits Eddie’s mental strength along with his athletic ability for his early career success. “He has always been more emotionally mature than other young horses. This mental toughness allowed him to tackle the highly technical aspects of the jumping courses he has faced.”

Eddie and Devin had an amazing and beyond impressive year. When Eddie initially arrived at LL Show Jumpers he was a bit cranky and bossy when he wasn’t performing. That attitude served him well in the show ring. His confidence shines as he competes. Now he’s affectionate and enjoys scratches. He has formed a deep attachment with his human friends, enjoys performing and knows he can trust Devin.

Eddie is a spectacular horse who was inducted into the Horse Hall of Fame at a very young age after a whirlwind year of astounding victories. He is a uniquely talented horse with a very bright future.