Community Gathers for Dedication of New Caldwell University Chapel, Located ‘at the Heart’ of Campus 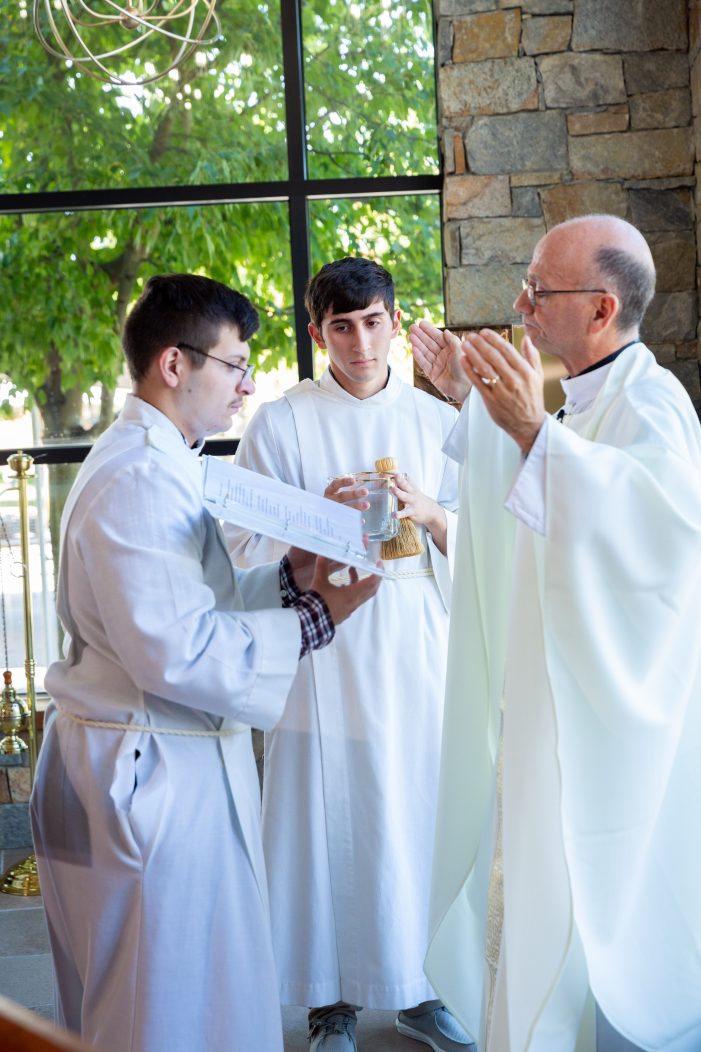 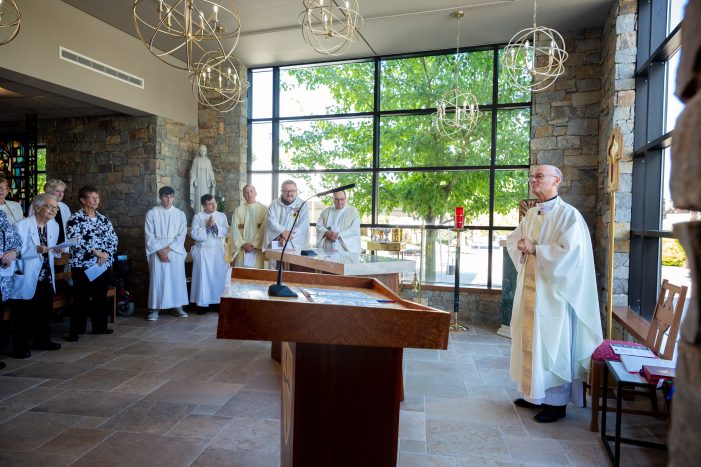 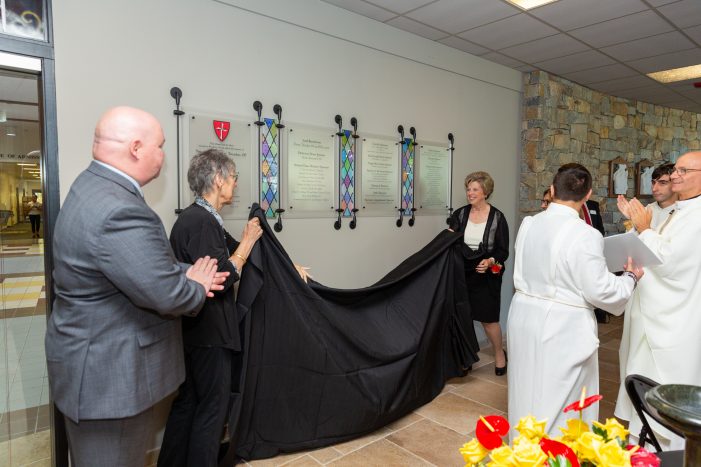 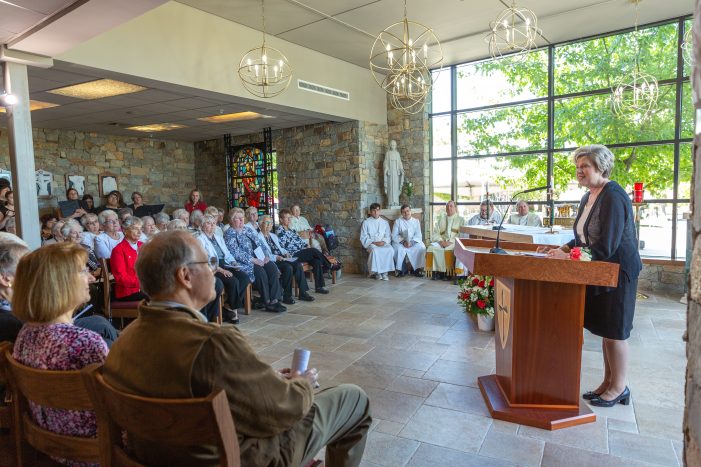 Nancy Blattner, Ph.D., OPA, president of Caldwell University, speaking at the dedication and blessing Mass of the new chapel on campus.   (can be used for both photos of Dr. Blattner).

In a historic occasion for Caldwell University, alumni, benefactors, faculty, staff, students and other guests gathered for the dedication and blessing Mass for the new Sister Mary Dominic Tweedus Chapel on Sept. 20.

Located “at the heart of our campus,” said President Nancy Blattner, the chapel “provides more access to sacred space in a heavily traveled area of the campus” and serves as a daily reminder of Caldwell’s Catholic and Dominican heritage. Blattner pointed out that the site overlooks the cemetery of the Sisters of Saint Dominic, the founders of Caldwell University, and the burial place of Sister Mary Dominic Tweedus, O.P., the aunt of the new chapel’s primary benefactor.   Blattner noted that the institution had opened its doors 80 years earlier on Sept. 19.

The celebrant for the Mass was Msgr. Robert Emery, pastor of St. Aloysius  parish in Caldwell, New Jersey and  episcopal vicar for Essex County. “This chapel leads us to God,” Emery said. “It opens our minds to his truth and our hearts to his goodness. Above all, it speaks of his longing to dwell in our souls—if only we would come here and put ourselves in his presence.”  The doors of “this chapel will lead many people to Christ,” said Emery.  He noted that in the responsorial psalm those gathered heard the words, “‘If today you hear God’s voice.’ We pray that in the years to come, many people will hear God’s voice as they visit and pray in the chapel.”

Student Jennifer Montejo, a junior and member of the chorale, was excited for the new chapel and to have a “loving space to be able to worship God freely.” Pointing out that in the homily Msgr. Emery said, many people will come to Christ through those doors, Montejo said, “I believe that.”

Students Anthony Del Debbio ’23 and Michael Angelos ’23 were altar servers at the Mass. Both were servers at their home parishes and they were very happy to be a part of the dedication mass. Being a server at university liturgies, Del Debbio said, is another step in his “faith relationship with God”.

The old chapel was decommissioned in 2018; it was not ADA accessible, had no air conditioning, little parking and

was out of view. In designing the new chapel, careful consideration was given to preserve many of the distinctive features of the old chapel “so that there remains an unbroken bond between Caldwell’s past and its present, between its founding and its future,” said Blattner. “We are surrounded by the exquisite original stained glass windows and Stations of the Cross. The tabernacle and the main altar were constructed using materials from the high altar in the former chapel.” Six large stained glass windows from the old chapel depicting Dominican saints are now magnificent artwork located outside the chapel.

Sister Mary John Kearney, O.P., professor emerita of education, said the dedication was inspiring and poignant and she is grateful to be a part of a wonderful center of learning. “As I prayed with so many who work and minister here—our current students and all who call Caldwell University their alma mater—I was made aware of how blessed we are to come together in this new chapel in the center of the campus. Dr. Blattner’s reflection touched me deeply as she spoke to the past, the present and the future of this chapel in the lives of all who have and will find this sacred place a respite.”

The liturgical designer and project manager was Meg Poltorak Keyes ’75, the first student to receive a bachelor of fine arts from what was then Caldwell College for Women. She has been renovating and restoring churches for over two decades.  Her artistic and design expertise, said Blattner, “helped turn our vision into a reality far more beautiful than we could have imagined.” Sister Gerardine Mueller, O.P., professor emerita and the founder of the Art Department at Caldwell, did the numerals for the Stations of the Cross and the processional cross she created years ago is now in the new chapel.

The Sister Mary Dominic Tweedus Chapel was made possible by a gift from alumna Elaine Tweedus and her late husband, Ed Lonyai, in honor of their beloved “Aunt Mary,” who taught in Catholic grammar schools in New Jersey and cared for the elderly Sisters.    Elaine, her brother Rob and his wife Linda attended the Mass.  Elaine said she wants the chapel to be used “for meditation, for prayer” and for people to “come and find peace here.”

Benefactors, including alumni, have seen the chapel as a living memorial to loved ones, sponsoring the crucifix, chairs, ambo, sacristy and entryway and fulfilling many other needs with their generosity. “Your name and the names of the loved ones you may have chosen to honor through one of these gifts will live forever in this special place of prayer and faith,” said Blattner.

Blattner  hopes the new house of worship will inspire the campus community, alumni and supporters to live out the institution’s mission “ever more vigorously as we look ahead to Caldwell University’s future.”