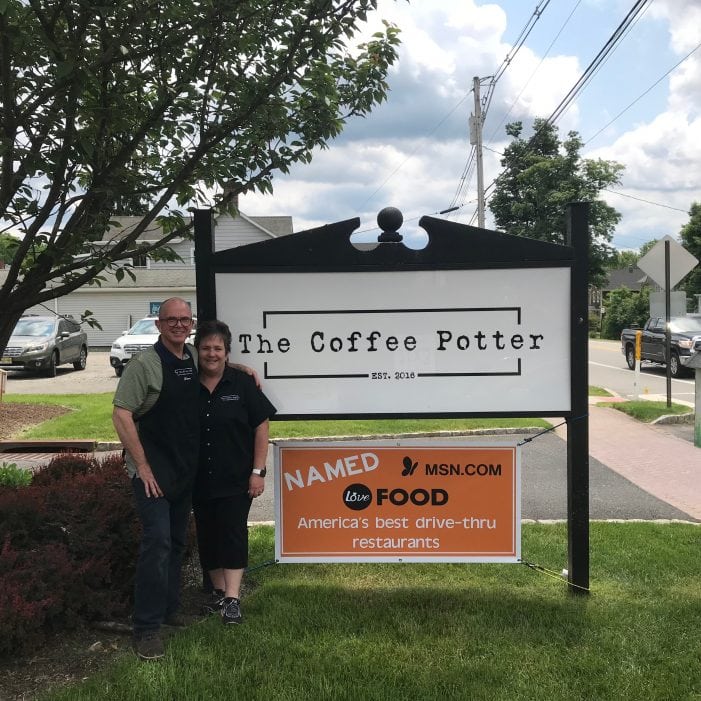 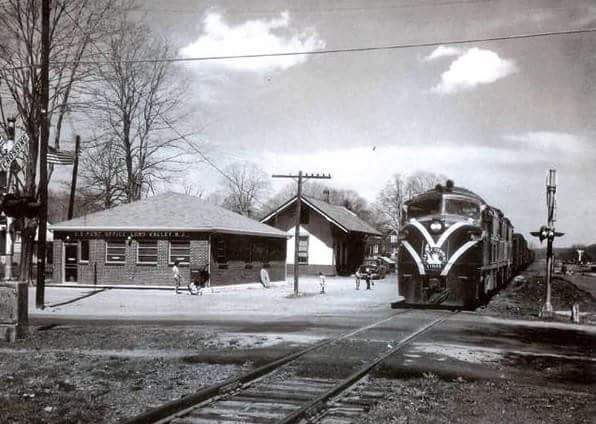 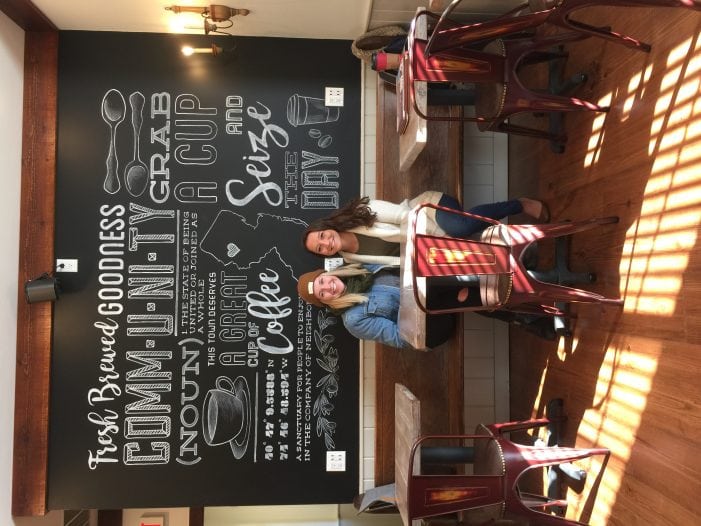 By Cheryl Conway
Just like a potter and a piece of clay, the creators at The Coffee Potter brew unique blends to satisfy individual palates.
Opened for 15 months, The Coffee Potter on Schooleys Mountain Road in Long Valley has become a popular hub in town for those craving a delicious cup of coffee or a quant place to meet for breakfast or lunch, book clubs and small meetings. Located right along the Columbia Trail, many stop in for a break while walking their dogs, riding their bikes or even their horses.
Equipped with an old fashioned drive up window, The Coffee Potter’s drive thru recently gained national recognition. In April, The Coffee Potter was recognized by a food based website lovefood.com as a top drive thru restaurant in the country.

Included on a list of 30 restaurants, the write up about The Coffee Potter described the hub as: “A community-minded cafe delivering specialty-grade coffee, The Coffee Potter in Long Valley does a roaring trade in ricotta pies, sandwiches and an array of cakes and biscuits. The venue is merely two years old, and the owners Geralyn and David Hickey have put together many people’s idea of the perfect coffee and lunch spot.”
Surprised to have been noticed nationally, David Hickey says “honestly it’s a mystery.”
While on vacation in Montana, Hickey says he received an early morning
Facebook message from a business owner for 90 years also on the list, who shared the write up on the msn.com website.
“My heart completely stopped,” he said, noting that The Coffee Potter was the only drive thru from New Jersey recognized on the list with the closest ones in Pittsburgh, Pa., and Rhode Island. “Was it a secret shopper? How would they fund us? How they found us and recognized us is a mystery. It’s charming, it’s friendly, but I have no idea why we were selected.”
There must be something about the quaint drive thru that garnered national attention.
“It’s a little old fashioned,” says Hickey, absent of an illuminated menu with a speaker or microphone like other drive thrus.

“You come to us, talk to us and we make the drink,” says Hickey. “You pull up to the window just like you are at a bank; talk face to face. They love it,” he says, “Even if its five people in line. “It could take five minutes.”
Its set up is “a bit unique,” says Hickey, “maybe not as efficient,” he admits, “but I think that’s part of the charm. This gives an opportunity to build a rapport,” a dialogue.

Part of his intent is “we want this to be a platform for neighbors to meet.”
Incorporated in Nov. 2016, The Coffee Pot opened in March 2017. The 1,254 sq. ft. building dates back to 1958 and was the Long Valley Post Office. It then became a bank, the township’s tax assessor’s office, then a bank again. It sat empty for three years before the Hickey’s leased it and moved in.
The Coffee Pot features drip brewed coffee and espresso drinks, hot, ice or frozen in small, medium and large sizes. Prices range from a small $1.92 coffee to $5.50 for a specialty creation. Flavored teas, hot and iced, as well as frozen and hot chocolate is also served.
Inside 25 to 26 customers can fit comfortably. Seven small café tables fill the room with one large high top table and a brew bar with four stools.
Hickey describes it as a “pub without alcohol,” furnished with a lot of antique furniture, old church pews, and café tables made out reclaimed barn wood.
Separate from the dining area, a conference room left over from the bank provides casual seating for eight people.
“We allow people to reserve that for different groups,” says Hickey, such as Bible studies, township people, book clubs, pop-up art studio for local artists.
For Father’s Day weekend, a crafter was booked to sell his pen and pencil sets to customers. A nice space for any groups of four or more to utilize, Hickey says “We hope they buy coffee,” while here.
The Coffee Potter is known for its “great coffee and good food,” says Hickey. He says they work with local gourmet establishments to sell hot food and salads, and get their bakery goods from Brooklyn and Queens, N.Y. Bakery items include muffins, scones, croissants and its signature crumb cake.
“People seem to love it,” Hickey says about the crumb cake, “so much so that we had one family order it for their grandpa’s funeral. Apparently, the gentleman loved it so much that he had requested a piece while he was dying in the hospital.
It was literally his last meal, so the family ordered it for his funeral repast. It comes in three different varieties, original, raspberry drizzle and chocolate.”
Homemade cookies are made in house along with its great coffee crafted with perfection.
The Hickey’s chose the name The Coffee Potter as it mirrors its mission to act like a potter with a piece of clay.

“Each is a unique creation,” says Hickey. “We want people to know we treat every order as a unique creation. As long as they describe it, we will make it for them.
It’s meaningful to us; we are all unique creations. God’s the potter and we are the clay.”
At the age of 54, the high school sweethearts from Long Island, had planned to go into business together once they retired.
“This is something my wife and I would do in retirement but we are nowhere near retirement so we decided to give it a try,” says Hickey who spent 30 years working in various executive management positions for technology, while Geralyn worked as an insurance claims adjuster.
“It’s been a ton of work,” he admits, but also a lot of fun. ‘We are really happy with it.”
Hickey says, “What we enjoy most about the business, my wife says it is the friends we have had the opportunity to make, and the opportunity to work with each other. No kidding, after 32 years of marriage we still enjoy one another’s company.”
Their original plan was to open a craft beer house and serve coffee in the morning, say Hickey, but to avoid the complications of attaining a liquor license they stuck with coffee.
“I just love coffee,” says Hickey. “For the last 10 years, I grew a fondness for different coffees like craft beers. We went through a fun process of selecting our roaster; have to taste a lot of coffee to find what you like best.”
Hickeys’ roasters come from the Crimson Cup in Columbia, Ohio. Hickey
discovered them while reading a book on successful coffee shops written by its owner.
Having lived in Long Valley for 20 years, where they owned Trinity Farm and where there two girls- Anna and Sarah, attended school, the Hickeys wanted their coffee shop in town. After selling their horse farm almost two years ago led, they moved to Stanhope, but Hickey says they may move back to Long Valley.
So far a success, business is up by 50 percent since it opened, he says. “People know we’re here; it’s become a habit to come to The Coffee Potter.” All local people frequent the shop but then the “trail crowd” stops in. “People come from all over to enjoy the trails,”15 miles from Flanders to High Bridge, what used to be an old rail line, has been replaced with crushed stone for walking, running, riding bikes and horses, he says.
Located “Right on the Columbia Trail, people come home from work; tons of people on the Columbia Trail, walking, riding bikes, we decided to go to summer hours and stay open later for them.”
The Coffee Potter is open Monday through Friday, 6 a.m. to 8 p.m.; Saturday, 7 a.m. to 8 p.m.; and Sunday 7 a.m. to 5 p.m. Hickey put out some Adirondack chairs with picnic tables on the back of his property so passerby’s can relax with a cup of coffee. The Garden Club put out flower boxes on the grass strip.
“It’s become a hub for the community,” he says, “Where people come to meet; people meet on blind dates.” It’s become a “platform for great coffee and great food but also a place for people to meet and congregate.”
The coffee shop is a favorite haunt of Amy Barron, 18, a recent graduate at West Morris Central High School.
“It’s got a cool vibe, a cool aesthetic,” says Barron of Long Valley, who visits the shop at least once a week for a TCP Mocha latte, black coffee or Americano. “It feels very homey. I also like the people that work there; they’re so friendly. Dave and his wife are the nicest human beings ever; they really want you to enjoy your experience.’’
Barron, who sometimes brings her younger brother, Leo, in for an iced coffee treat, also digs the local baked goods sold there, and the high probability of running into a friend. “You’re bound to see at least one person you know,” she says.
This summer, try its summer special: New Orleans Grind with Chickory, “not found anywhere; the craftier side of what we want to do.”
For more information, call 201-230-9890; email thecoffeepotter@gmail.com; or
visit on Facebook and Instagram.