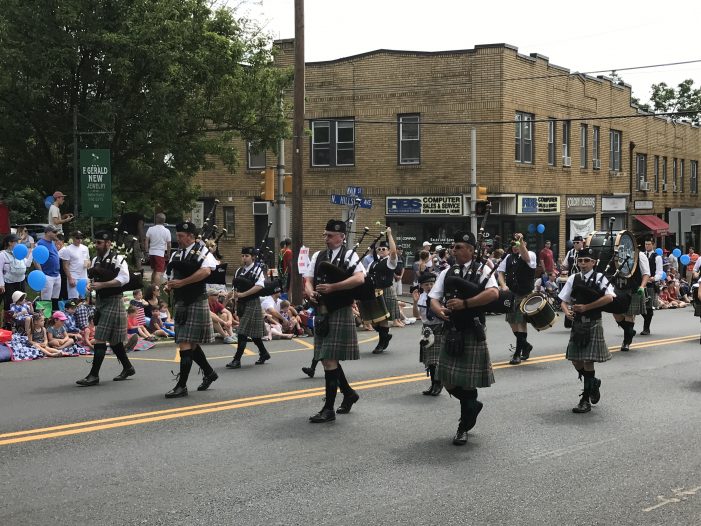 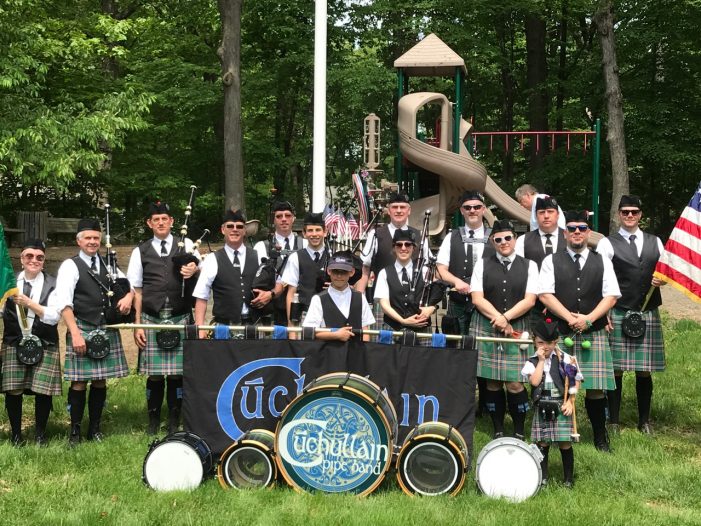 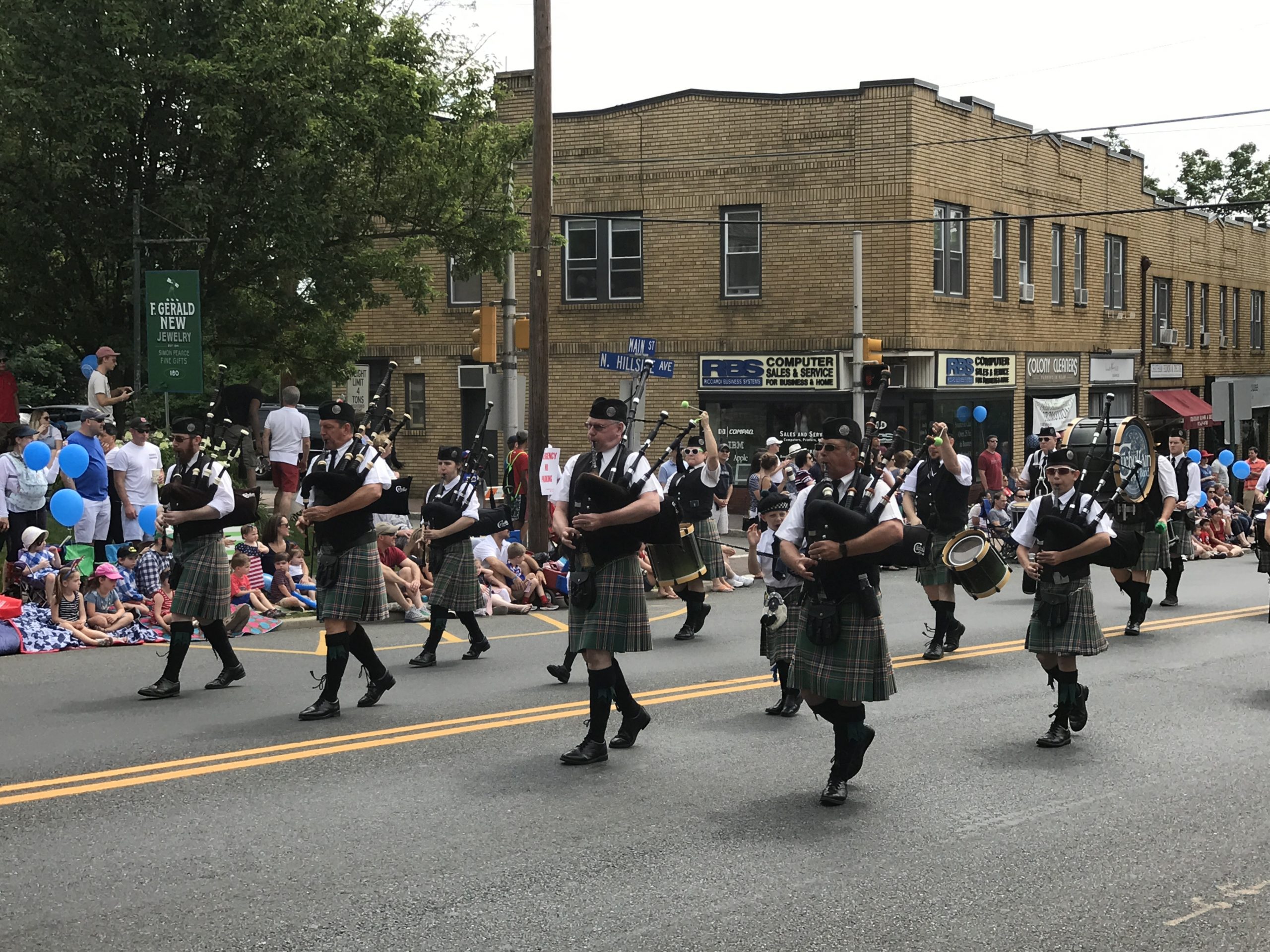 It all began with Michael J. Smith 45 years ago.

A.J. McCann, Pipe Major and 26-year member of the CúChullain (koo-hull-in) Pipe Band, gives the details in brief. “It was Saint Patrick’s Day, and he (Smith) was sitting in a bar in Mine Hill, New Jersey. He was a piper and he said, ‘You know, I think we should have a parade!’ He went out, got his pipes out of the car, and he walked down to the end of Main Street in Mine Hill – just him and a bunch of people behind him. That was the first parade, and that’s how he decided he was going to form a band.”

That march of a dozen people was the beginning of the CúChullain Pipe Band, an organization dedicated to preserving traditional Celtic music. It still is the first pipe band ever established in Morris County.

The CúChullain Pipe Band is a family-oriented group, which is the way Smith wanted it. “He didn’t want a band with a lot of tensions and rivalries because, over the course of years, you see bands come and go and a lot of it is due to infighting amongst members,” McCann says. “He was really big on making sure this stayed a family event. Since then, we’ve had people come, they joined the band at a young age, they go to college, they get married, they have kids, and now their kids are in the band.”

Mike Houston is in his seventh year as a CúChullain Pipe Band member. He started piping at age 48, and now serves as the organization’s secretary. He says of his role, “It’s really just a matter of keeping communication going, doing what I can to recruit new members. Most of the members of the band have been around a long, long time. You become a member of the band, and you stay a member of the band; there’s not a lot of moving around. And I also like that it’s been in Morris County since 1977, it has a lot of history, and it’s also family-oriented.”

McCann’s family is a perfect example. His two sons, Alexander and Matthew, now ages 18 and 14 respectively, have marched with him in the band since they were able to walk. “At three years old, they were marching down the street with me, but now they march beside me. My son is the Pipe Sergeant, he just got promoted this past year. For the people in the band, it’s a huge family that never ends. It just keeps on growing. Somebody can come back who’s been with the band and gone for 20 years can step right in and, boom, you’re back in the family again. We have a lot of fun doing what we do.”

McCann’s wife of 26 years, Pam, also plays a major role. “She’s been very supportive,” her husband says. “She actually was a drummer in the band many years ago, a tenor drummer. She’s had her hands in it too, and now she got elected to be the band manager. She runs the band now.”

John Garrity has served as President of the CúChullain Pipe Band for five years and has been a member for 15 years. He also arranges the band’s music. “I have access to bagpipe music writing software. Really, at this point in time, I’m also the piping instructor, so I try to keep the music interesting. I’ll find stuff on the internet, I’ll transpose it into the software, make a bunch of copies, and then we’ll go on Thursday night and have fun.”

Garrity also enjoys the family element of the band. “That’s the thing I’ve always loved about this band and why I would never think of leaving,” he says. “It is because of that whole family quality, and it’s absolutely true. When we go to parades, we’ll bring grills and just pick a side street, and we’ll just cook up some hamburgers or something. And when you go to practice, you’re not going just to practice. You’re going to practice to see these people. It’s just a beautiful thing.”

As Pipe Major, McCann is in charge of the music execution, practices, conducting, and leading the band in parades – and there are quite a few during this busiest part of the year for the CúChullain Pipe Band. “I think we have four parades in March to do,” McCann says. The band either leads or participates in the annual Morristown Saint Patrick’s Day Parade, and also marches in parades in Denville, Hackettstown, West Orange, and East Stroudsburg, Pennsylvania during the year.

The CúChullain Pipe Band is always looking for new members, and training is provided. “You’re never too old to pick it up,” Houston says. “We meet every Thursday night (at the Rainbow Lakes clubhouse in Denville), and John is the instructor. He put together this curriculum that everybody uses, so we really keep on the same page, learning the same things at the same pace. But we take new members at any time during the year.”

Perhaps Garrity puts it best. “I love to play the pipes,” he says, “but the reason I go is just for the people I’m playing the pipes with.”

For more information about the CúChullain Pipe Band, visit their website at www.cuchullainpipeband.com.