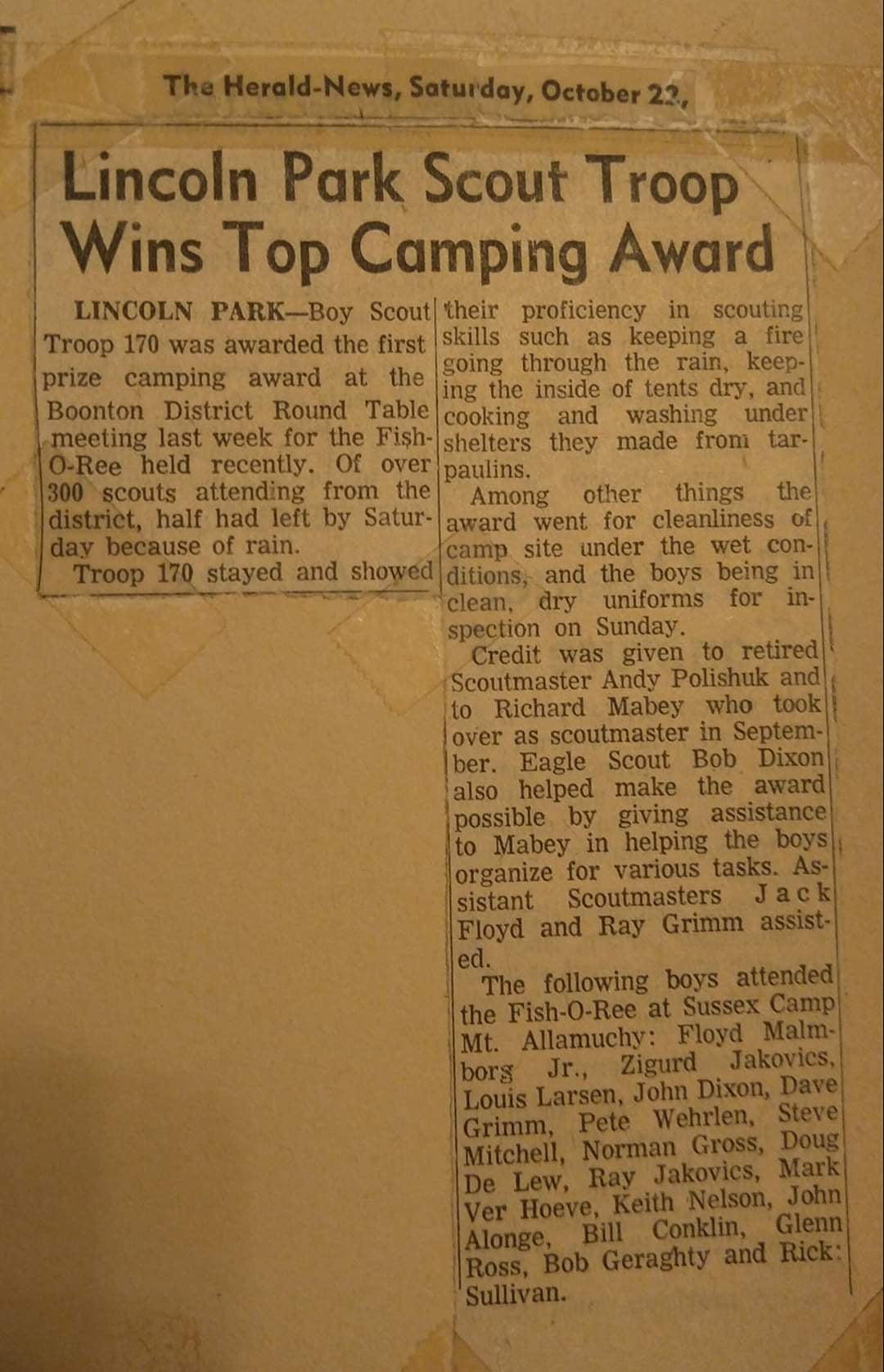 One of the most influential individuals, of my youth, along my rocky path toward becoming a writer was Mr. Nicolas Marino, who was the Editor-in-Chief of the Lincoln Park Herald during the 1960’s and 1970’s. Mr. Marino’s newspaper was a very fine, small town weekly newspaper. Each issue varied between 16 and 32 pages in length. The number of pages in the old Lincoln Park Herald were always divisible by four. I had my first article published in the old Lincoln Park Herald when I was 12 years old, back in October of 1965. Boy Scout Troop 170 won First Place at the big Boonton District Camporee.

The funny thing about that article is that I wrote it at the Barnert Hospital in Paterson, where I was fighting a very serious bout of rheumatic fever. What happened is that on the Sunday evening, right after the big camporee was over, Mom and Dad and my sister Patti came to the hospital to visit me.

Dad told me all about the big camporee. The next morning, I wrote the article in my notebook, sitting up in my hospital bed. That Monday afternoon, I gave the article to my mom and she typed it up and Dad dropped it off at the little newspaper office of the old Lincoln Park Herald. And, Mr. Marino published it! It was the first article that I had ever gotten published in the old Lincoln Park Herald.

It is a most funny and unusual thing. From October of 1965 till late August of 1966, I had strict bed rest and had three long-stay hospital visits at the Barnert Hospital. During that time, I wrote well over a dozen articles about different events that Boy Scout Troop 170 attended. From camping trips to hikes to the big Boonton District Klondike Derby to a long-term hike along the Appalachian Trail to simpler events like the troop family picnic outing. But, the ironic thing is that I never attended one of these events. Dad would tell me about the specific scouting event and then I would let my imagination take it away and I would write an article about the event.

I first met Mr. Marino in the Autumn of 1966, when I was back on my feet again and had started the eighth grade at dear old Chapel Hill School. I remember when Mr. Marino met me, he told me that he felt as though he already knew me through my writings.

I fell in love with that little newspaper office. It was located along the northern portion of Boonton Turnpike. The office was in a small home. That very same building still stands and is now a private residence, so out of respect for the people who live there, I won’t tell of its exact location.

I learned a lot from writing for the Lincoln Park Herald. Aside from scout news, I wrote articles about activities in my Sunday School and Church Youth Group. I also wrote little articles about neighborhood news.

I distinctly remember Mr. Marino telling me not to write to impress people, but to write to be understood. He often told me to write so that my articles could be easily understood. Also, Mr. Marino was very strict about the rule that the five W’s and one H, always had to be stated in the first paragraph. The five W’s are: who, what, when, where and why. And, the H stood for how.

Mr. Marino did not teach me the subtle symbolisms of Shakespeare’s plays. He didn’t teach me about structuring meter for poetry. But he taught me something so much more valuable, how to write for a real newspaper. And, for that I am so dearly appreciative of this very wonderful newspaper man.

Now at 66 years old, I often dream that I am back in that old Lincoln Park Herald office, talking with Mr. Marino. I think that Mr. Marino was one of the last of the old-time newspaper men, for whom it seemed that printer’s ink ran through their veins.