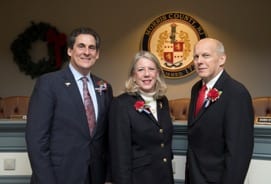 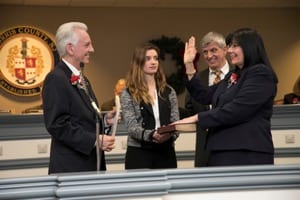 Morris County Freeholders Deborah Smith of Denville and John Krickus, of Washington Township, and County Clerk Ann Grossi of Parsippany were sworn into office for second terms, while former Mountain Lakes Mayor Stephen Shaw took the oath of office this evening for his first term on the Morris County Board of Freeholders.

At county government’s 2019 Annual Meeting held in Morristown, Freeholder Doug Cabana also was selected by his peers for a third consecutive term as director of the board, while Freeholder Heather Darling was chosen as deputy director.

“It is an honor for me, and a privilege I take very seriously, to have been chosen again by my colleagues as freeholder director,” said Freeholder Cabana, who hails from Boonton Township and is the longest serving member of the county governing board, starting in 1997.

“My goals in 2019 are to make decisions that benefit all residents of Morris County, to keep close watch on spending while delivering critical public safety and quality of life services.”

Critical issues for 2019, he told an overflow audience in the County Administration and Records Building, include:

A past president of the New Jersey Association of Counties, it was under his leadership in 2006 that the association became an initial driving force behind the now popular concept of “shared services.” Cabana will continue in 2019 as Morris County’s representative to that statewide association, a role he has held since 1999.

Some specific projects to be addressed by the county in 2019 include starting up the county’s new Navigating Hope mobile social services operation, building a new $10 million County College of Morris engineering and manufacturing facility, starting work on the new 4.4-mile Pequannock-to-Wayne Recreational Trail, continuing and expanding special training program on school violence for law enforcement and educators.

He also spoke of the need to deal with the infestation of the county’s ash trees by a tree-killing insect, and pursuing the county’s petition to the U.S. Supreme Court to allow historic houses of worship to participate in the county’s historic preservation program.

Also, he said the board in 2019 will take key steps to consider long-term judicial space needs at the county court and government complex in Morristown. He noted that a special information session for the public will be held next Wednesday evening, Jan. 9, in Morristown.