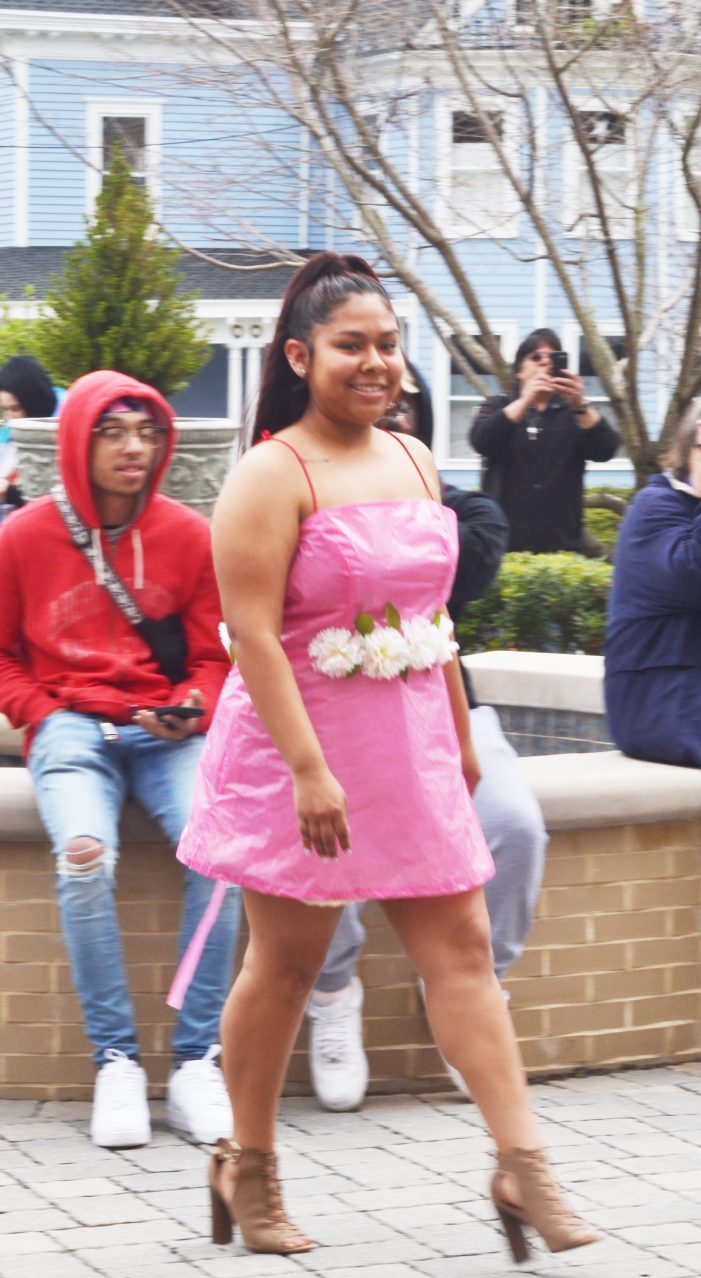 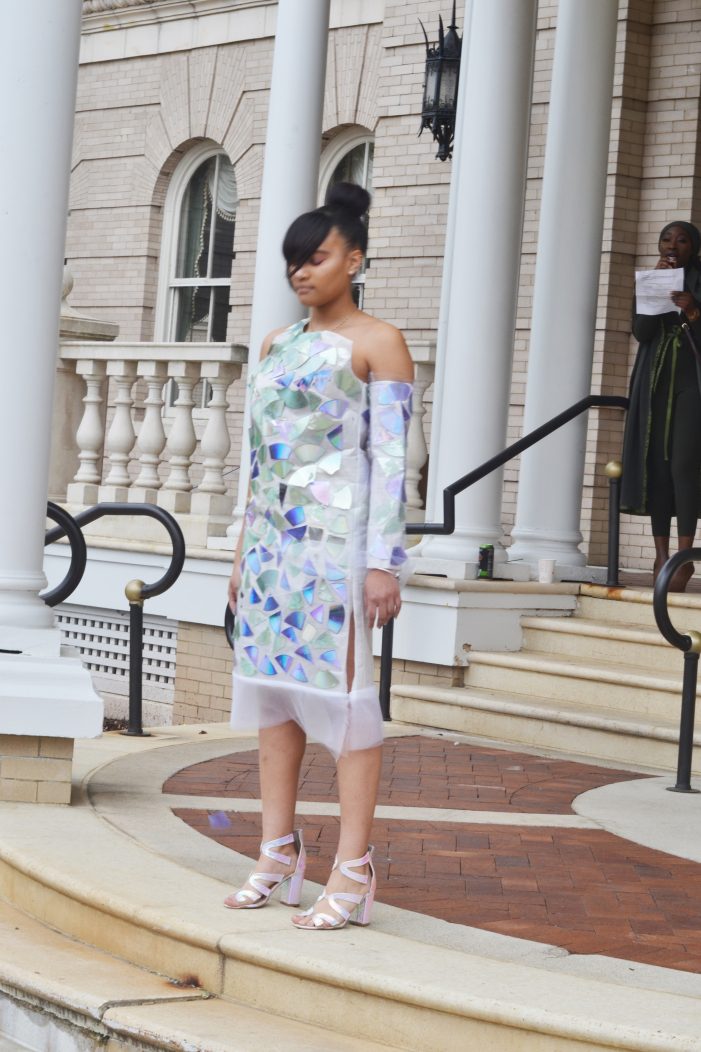 Anastasia Miranda sparkles in a dress made from old CDs. 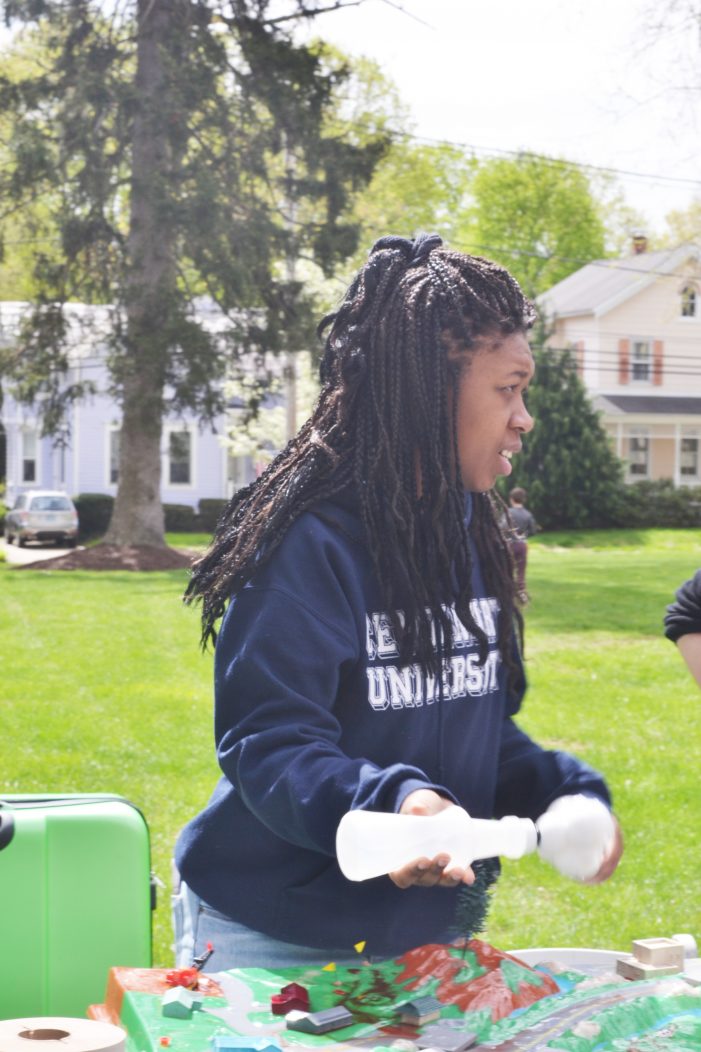 Ashlee Smith makes it rain on the watershed model. 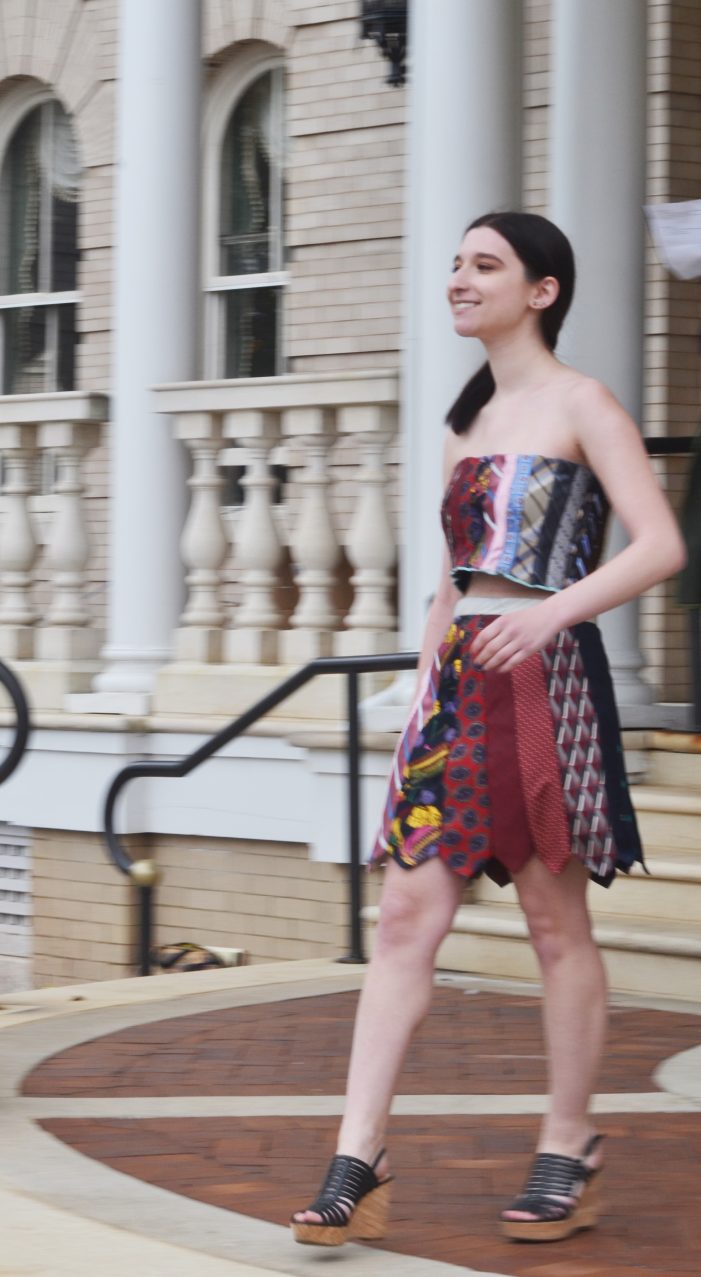 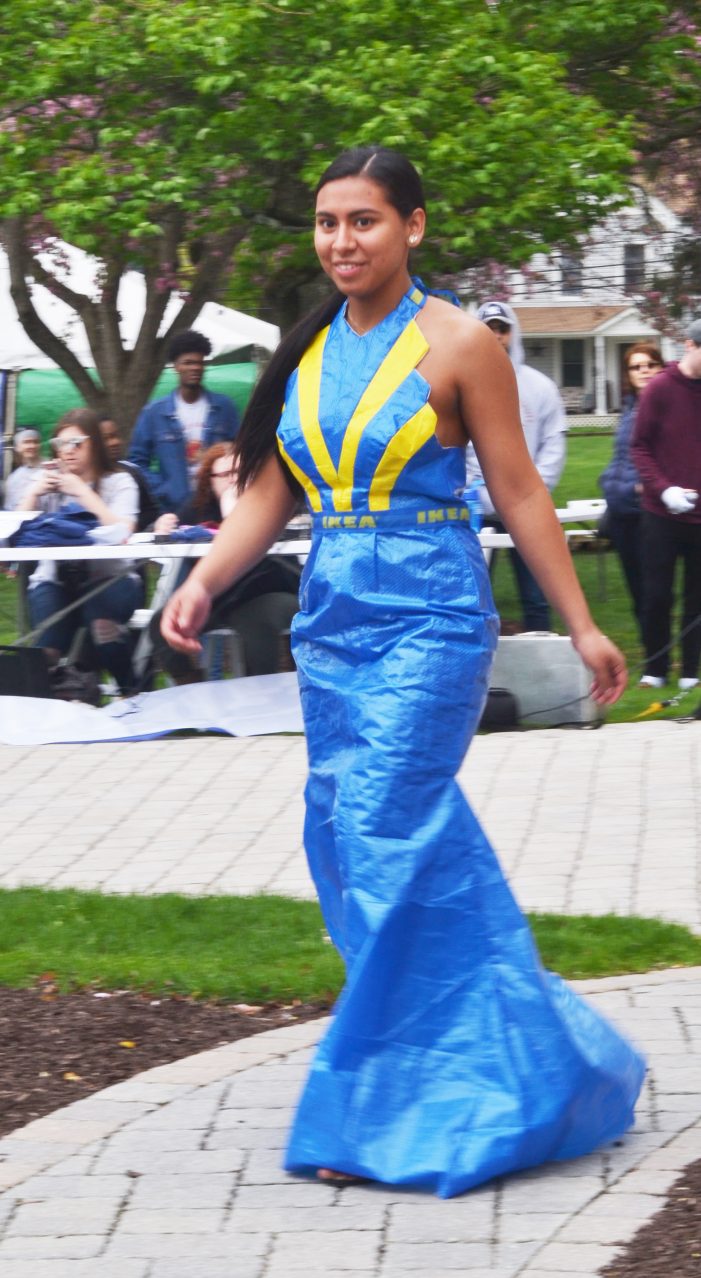 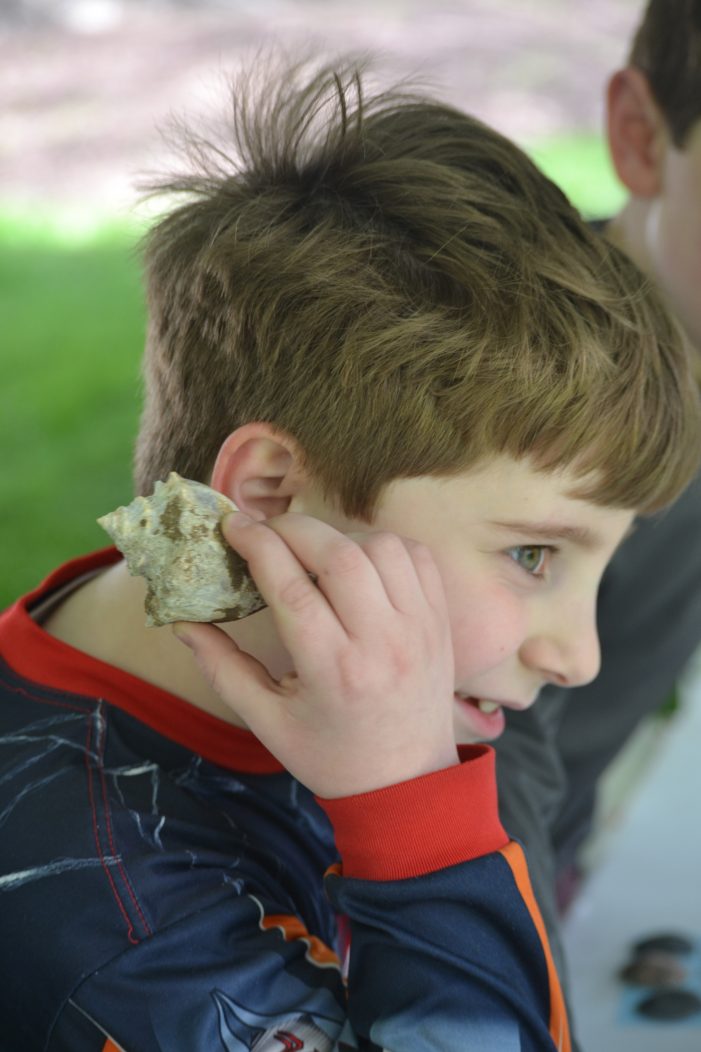 Petey Denica, 6, at the moment he realizes he can hear the ocean. 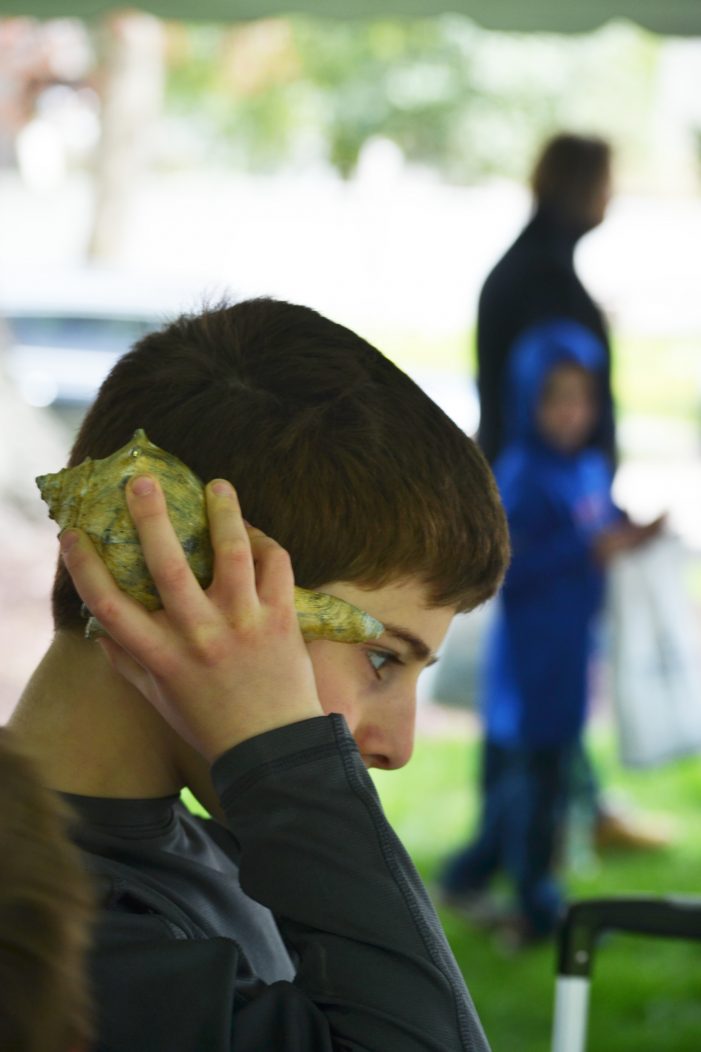 Ralphie Denica, 9, tries to hear the ocean in a shell. 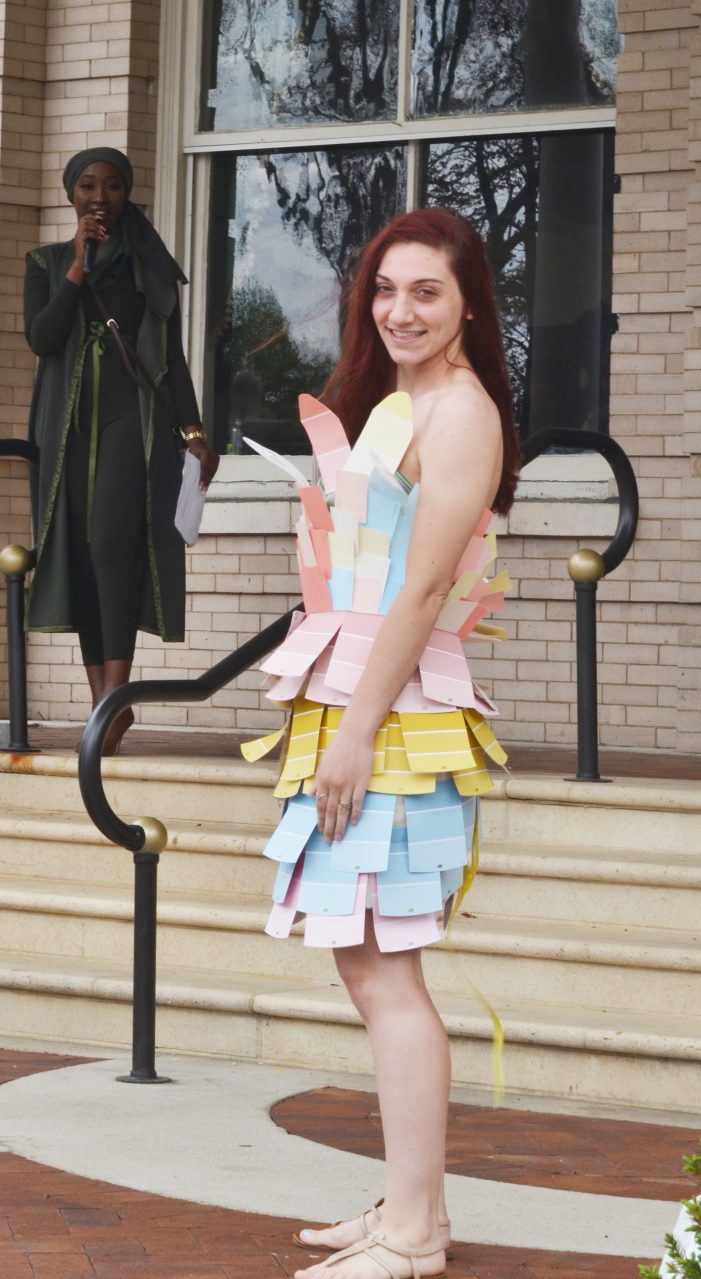 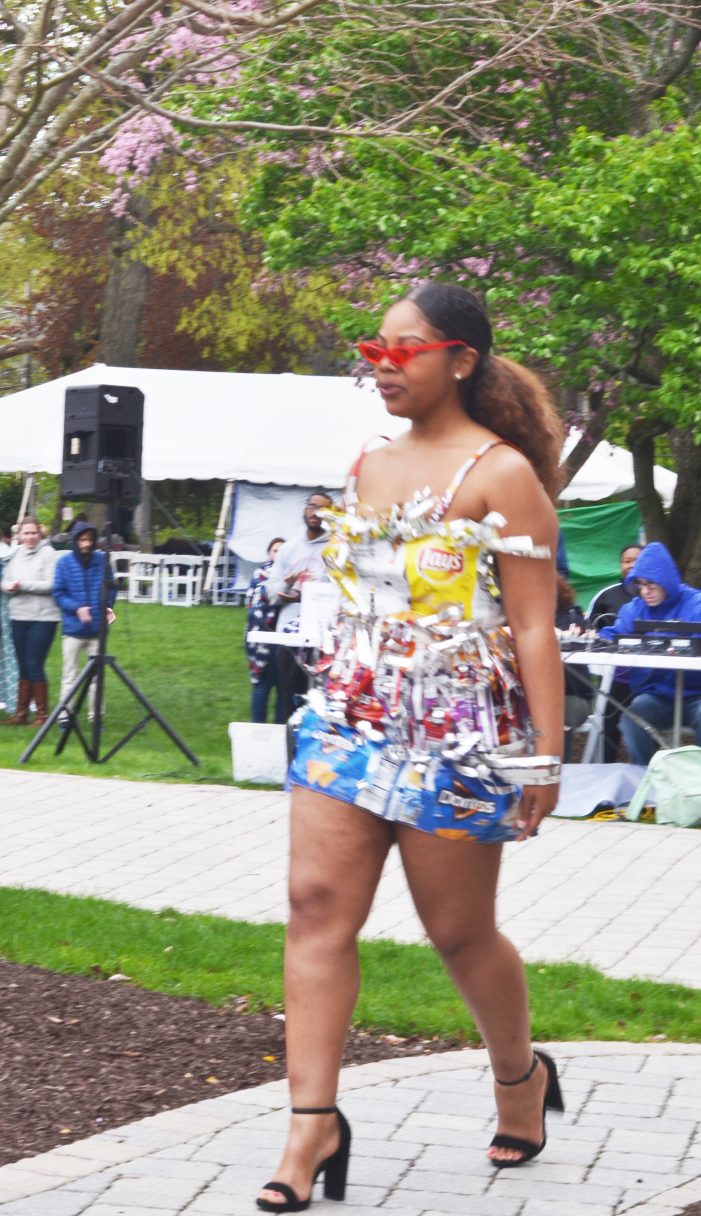 Shanelle Travis models her dress made from chips bags. 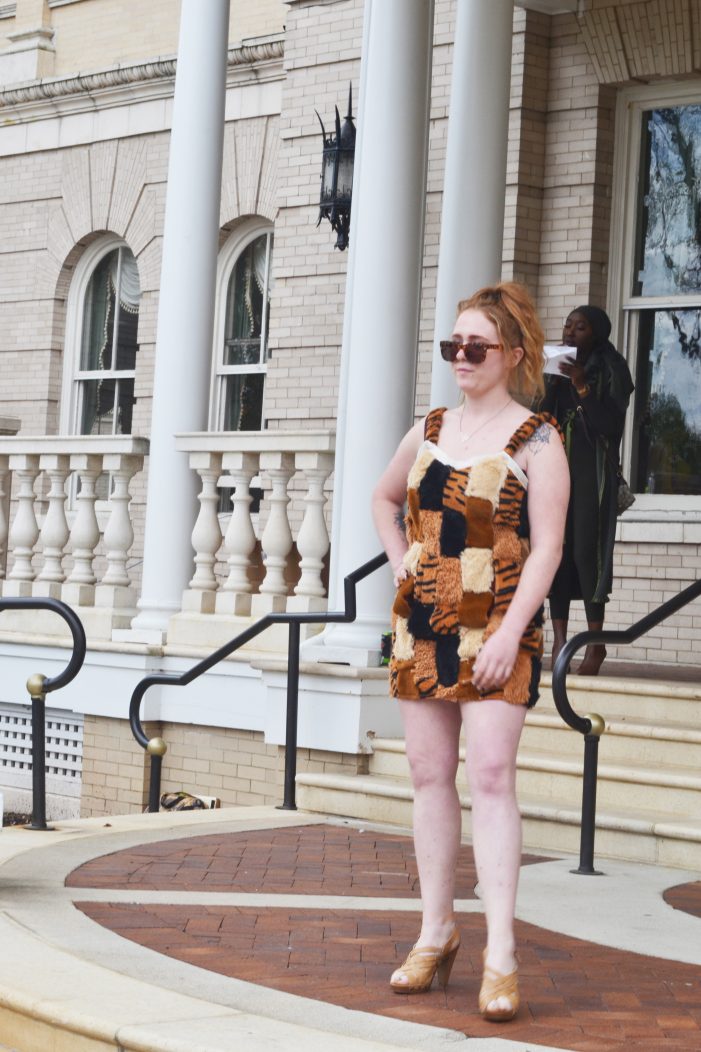 Valerie Mulero in a different kind of fur.

The aim of the show is to illustrate reusing everyday objects and to create high fashion, according to Professor Mia Wang.

Shanelle Travis chose to create the beauty of a sunrise by the ocean. She used chip bags to represent the proper colors and modeled her own dress. She titled it “Living.”
Elizabeth Brouse called her bustier style outfit “Fresh Paint” because it was created out of multicolored paint sample swatches. Renee Hack modeled.

Gina Infante created an outfit with 90s silhouette. Called “Welcome to the Jungle,” it was made from old stuffed

Lare’s necktie creation was judged best in show by other students.

The fashion show is always the high point of Earth Day, but science students from the university set up many tables and displays.

demonstrated how the class created simulated pollutants representing oil, road grits, fertilizer and other things that should not be in waterways. She then made it “rain” on the model with a plastic bottle. The slopes and curves of the model showed the pollutants traveling into bodies of water.

Professor Julie LeBar said the models are a good way to educate the community how pollutants travel, sometimes a great distance,

to do their damage. She said several of the students who volunteers to give up a Saturday morning for the demonstrations were education majors interested in incorporating ecology in their classrooms.

Other tables provided fun projects for children. One table featured

students teaching children to make wind socks out of plastic bags. Another had them

create suncatchers out of reused material.

Marine biology students had a habitat for shrimp, showing children

the importance of clean water to marine animals. They also had shells and taught children which ones would let them hear the sounds of the ocean.

Other students set up games for children such as ring-toss and sack races and a bouncy house was free of charge which one mother said is very unusual.

The college’s digital radio station kept up a steady stream of music. Fair trade items were

available for sale and several environmental groups were discussing their missions.

The high winds kept the Allamuchy Environmental Commission from showing its videos and limited the use of sterno for warming food, but didn’t keep people away.