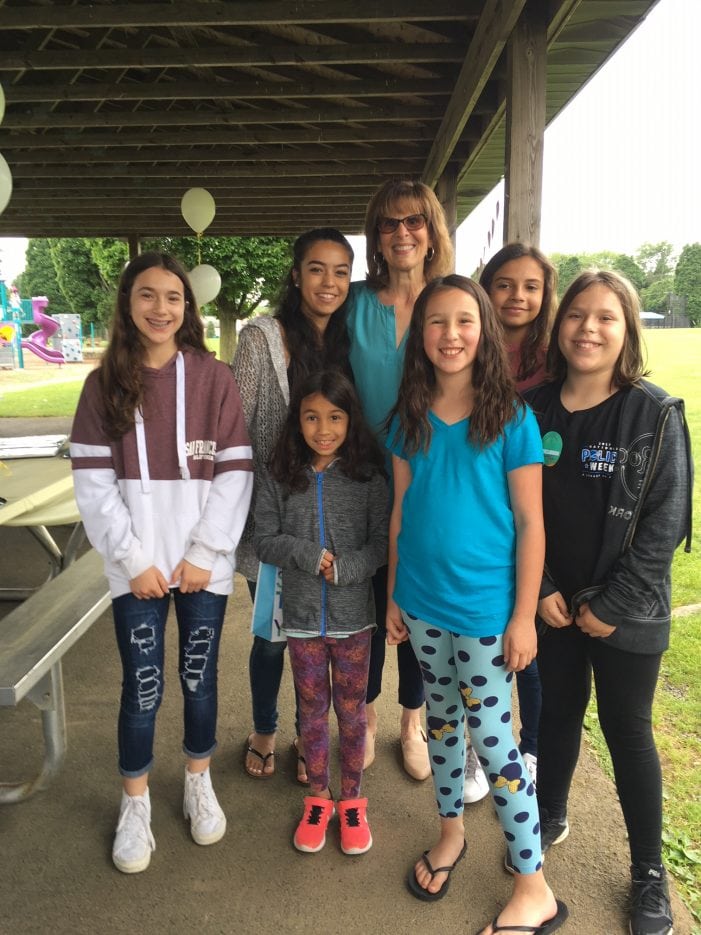 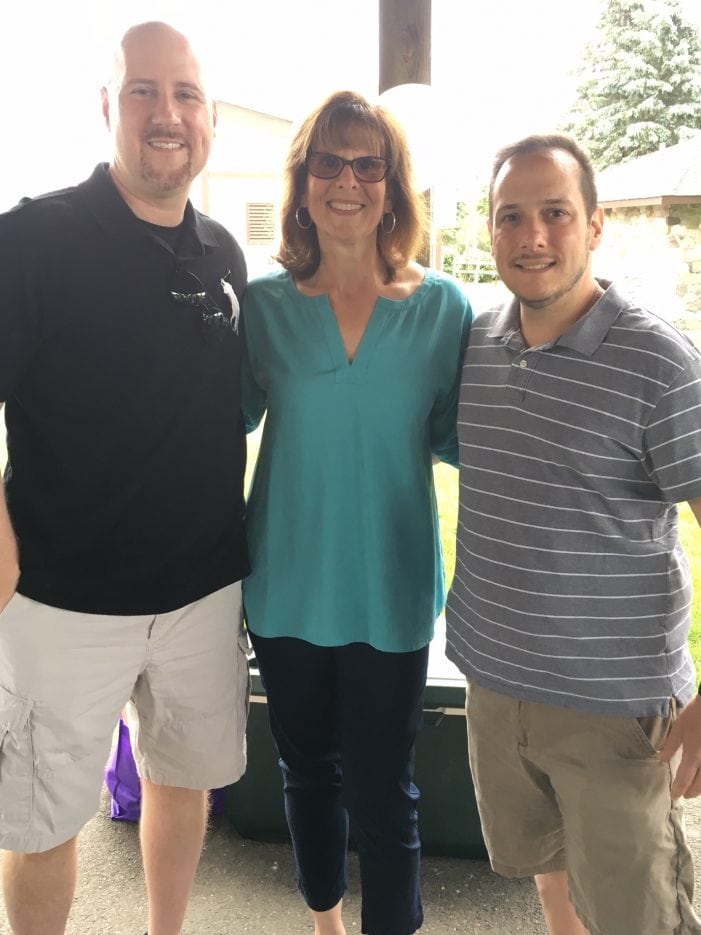 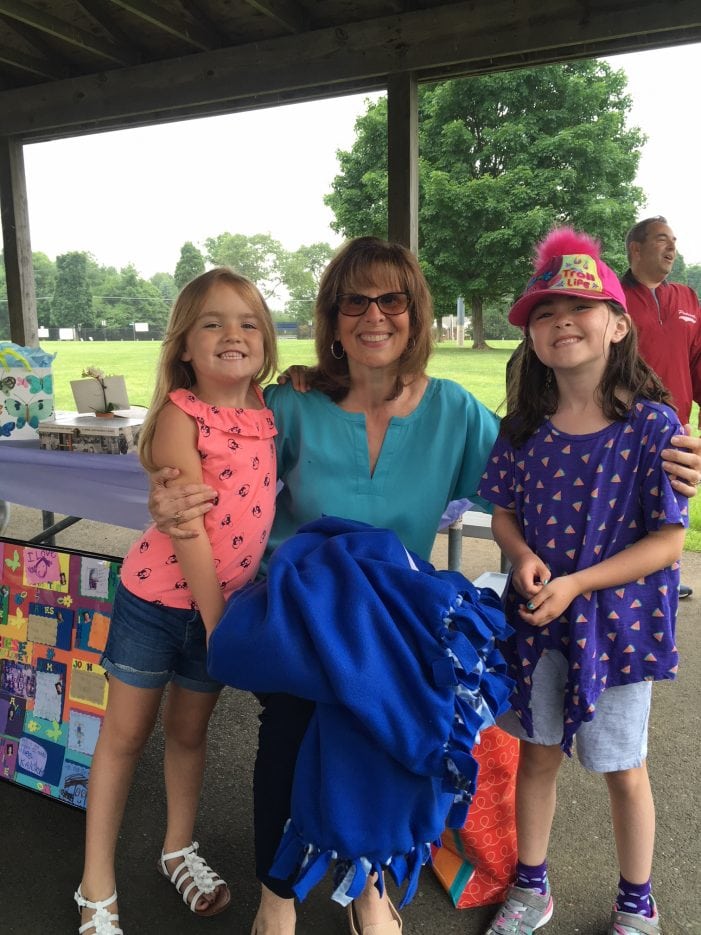 By Lisa McNamara
Saying goodbye is hard, especially when it means retiring from a job one loves and have been doing for the past 18 years, so instead, Mary Jo Griese, beloved kindergarten teacher at Kossman School, requested a get together to say hello to all her students at Rock Spring Park in Long Valley on June 23. 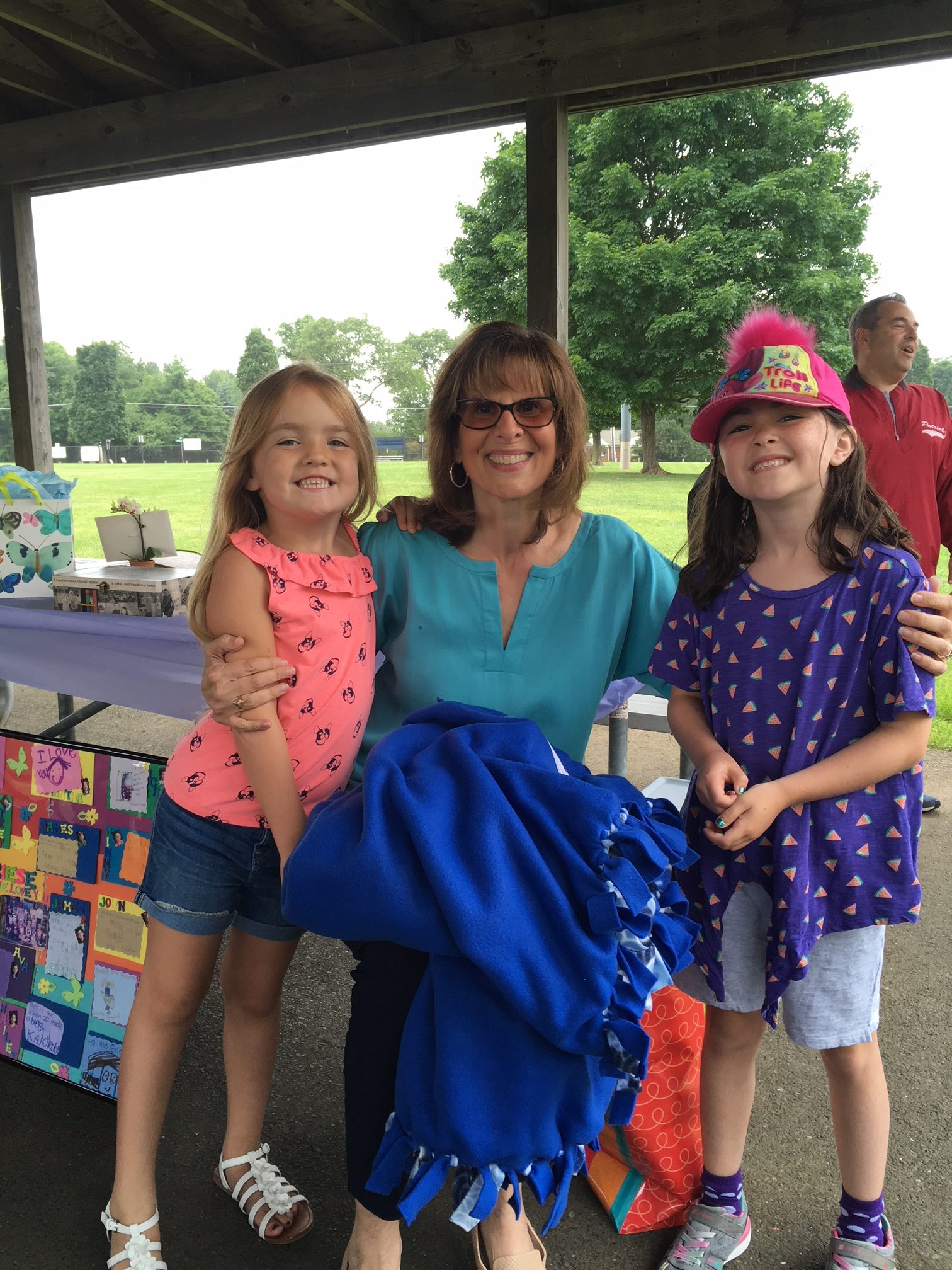 When Griese’s coworkers asked her what she wanted for her retirement, she quickly replied, “I want to see my kids.” Her coworkers rallied, planned and organized the non-traditional event to honor her request, and there were plenty of smiles and hugs to go around as former students, families and friends flooded Griese with memories, gifts and well wishes.
It all began in Jersey City where she grew up, graduated from St. Peter’s College and started her career teaching second grade at a parochial school. Perhaps one of the biggest surprises of the day came when two men walked into the pavilion, upon seeing them, Griese exclaimed, “No way, no way!” But yes, Sean Perry and Anthony Festa, students from her very first class of 1982-1983, joined in the
celebration.

Perry remembers her making class fun and adds, “What 7 year-old boy likes school, especially parochial? But when I think about the teachers I’ve had, she’s at the top of the list.”
Festa says, “I remember getting caught cheating on a spelling test in her class and Griese turning the experience into a confidence-building lesson.” That lesson had a lasting impact on him.
Griese stepped away from teaching to raise her family and moved to Long Valley in 1992. She re-entered the field first as a substitute, then took over for a maternity leave and eventually accepted the kindergarten position at Kossman School in September 2000 and has stayed there ever since.
“Watching the unbelievable growth that occurs academically and socially,” has given Griese great joy, adding, “I always wanted them to know school was a safe, fun and wonderful place to be.” All the while, she strived to instill in her students a love for school and learning.
Waves of students of all ages, families and friends streamed in as the party progressed, and Griese’s daughter, Kathleen Moor, summed up the turnout as “a testament to the impact she’s had on the kids in town.”
Arlene Janusz, one of the party’s organizers, coworker and friend, notes, “Everything I learned, I learned from her.”

Over the years, Griese developed wonderful relationships with families in Long Valley. And one of those families, the Buchanans, was there. Kara Buchanan, mother of four, says “You can’t get any better; she’s a gem!” Buchanan should know since she has the distinction of being the only family where all four children
had Griese as their kindergarten teacher. “They’ve been blessed and fortunate to have her to start their educational career.”
Kaitlyn and Maddie Buchanan recounted many things they love about Griese and her classroom, but the name rings stood out as a favorite for Maddie.
Aurora and Colton Drake want Griese to know, “You’re the best teacher we ever had.”
Leaving the classroom, Griese will miss many things, but mostly “their smiles and when the spark gets lit and they start to soar.” She offers a parting message to her students that she will always hold them dear and urges them “to continue to make a difference.”
One lesson could be learned from the party and that is that Griese has certainly made a difference in the lives of many.