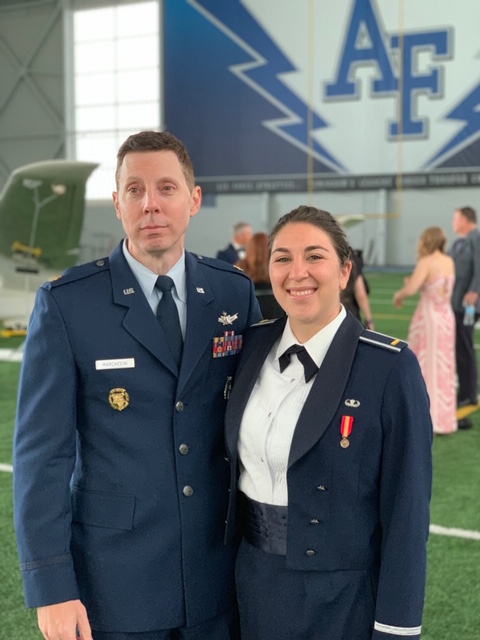 Gina Arrabito and Joseph Marchesini at the USAFA commencement ceremony 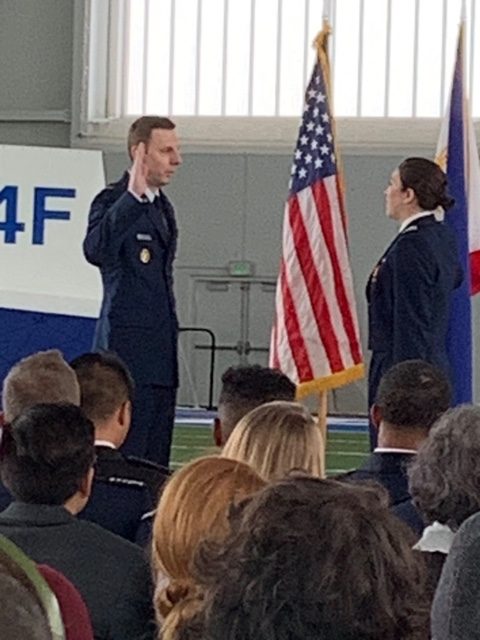 A 2015 graduate of West Orange High School (WOHS) made history for her former school when she graduated from the U.S. Air Force Academy at its commencement ceremony on May 30. Gina Arrabito, a West Orange native, became the first female cadet from WOHS to graduate from a military academy, and the first former WOHS student of any gender to graduate from USAFA.

Joseph Marchesini, a retired U.S. Air Force Major and Arrabito’s former ROTC program director at WOHS, administered her officer’s oath at the commencement ceremony. Marchesini, who has known Arrabito since 2013 and wrote USAFA admissions in support of her application to the academy, had nothing but praise for the newly minted second lieutenant.

“As for work ethic and passion, [Arrabito] has impressive amounts of both. I spent seven of my 20-plus active duty years training college students to be lieutenants. Of those 300 or so I helped train, she is in the top five for work ethic, discipline, commitment and leadership potential,” Marchesini said. “And that was when she was in high school.”

Marchesini related that Arrabito did not always dream of a life in the Air Force; in fact, she would often jokingly blame him for her career path. The lieutenant was always interested in military service; one of her grandfathers served in the Army and the other in the Navy. Still, Marchesini said that the Air Force specifically first interested her in his program at WOHS. Arrabito enrolled in the retired major’s Air Force Junior ROTC program in 2013, and quickly stood out amongst her classmates.

“She took to the training well and I noticed very early she was a natural leader, so I started talking up the Air Force Academy as a post high school option,” Marchesini said. “What interested her in this career path is a better question for her to answer, but I can tell you she has spent her life selflessly helping others and now wants to be a combat rescue pilot.”

Arrabito is scheduled to start pilot training in Texas in February. This training could last up to two years, and then Arrabito will be relocated on assignment.

During the commencement ceremony, Arrabito recited the commissioned officers’ oath, something that every US military officer must do before they assume officers’ rank (“commissioned” here means to be appointed by the President). A commissioned officer of equal or higher rank must read the oath, with the graduating cadet reciting back the words.

Traditionally, the officer to be commissioned chooses someone important in her life and training to read or administer that oath. Marchesini felt honored to accept when Arrabito asked him to do this at her commencement ceremony. The two have remained close over the years, and Marchesini’s words of hope for Arrabito as a second lieutenant underscore the bond they share.

“I’ve come to think of [Arrabito] as another daughter, so first and foremost I hope for her to be safe. Beyond that I wish for her to be happy and content in her chosen profession and as an officer in the United States armed forces, serve our country with honor,” Marchesini said of his hopes for Arrabito’s future.