“Fleet Week” Gives Civilians Inside Look At The Armed Forces 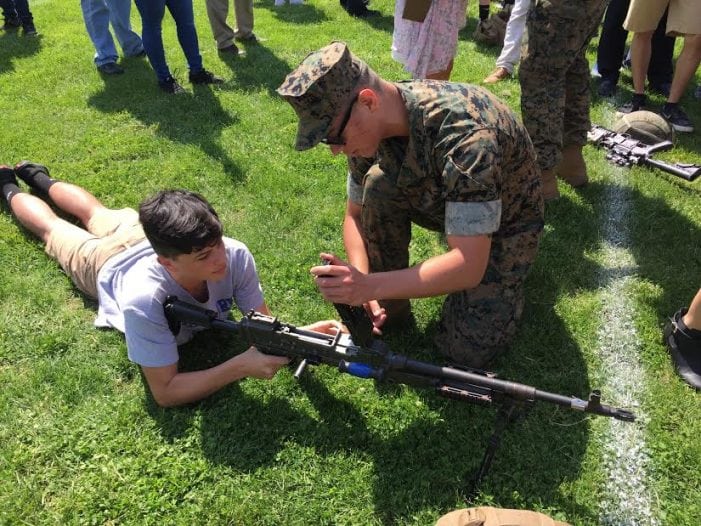 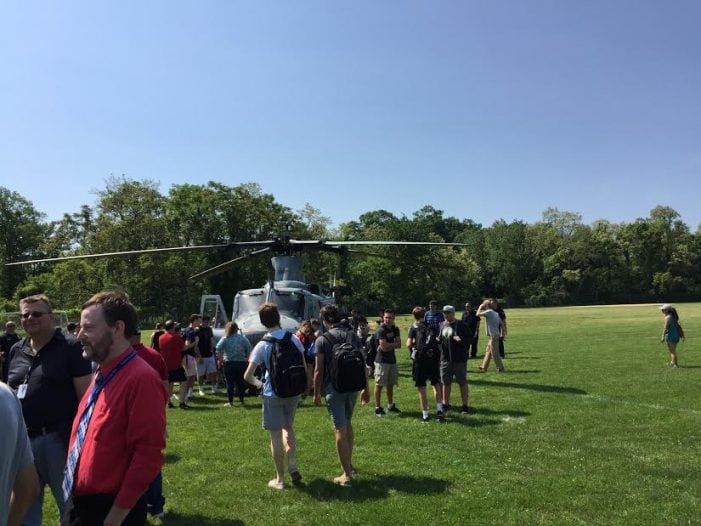 By Ben Bograd
On May 25, people were greeted at 10 a.m. to the whirring of propellers, as members of the United States Marines landed two helicopters in the open field behind Millburn High School.
Students watched in awe as the immense helicopters descended. The event was part of Fleet Week, a weeklong outreach program allowing citizens to get an up close look at the soldiers and vehicles who bear the Stars and Stripes. 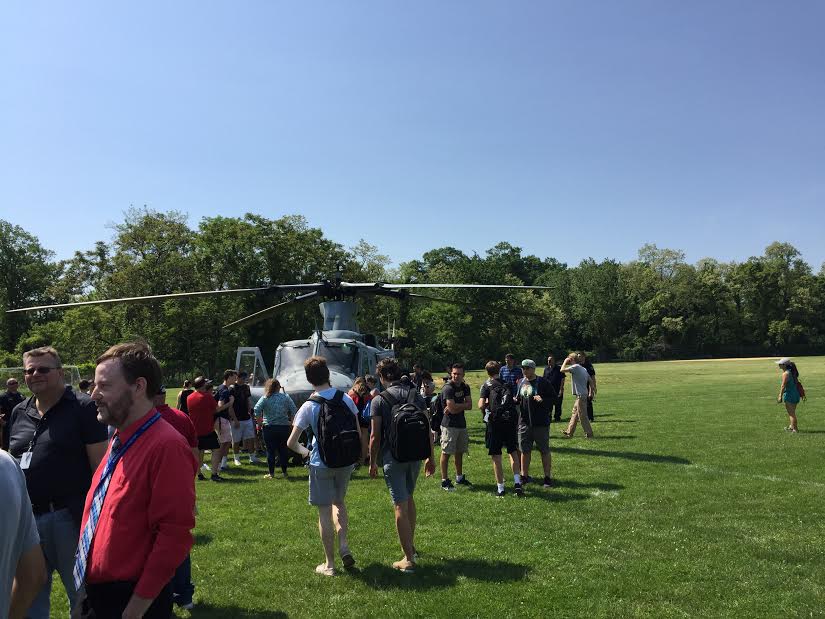 After the helicopters landed, senior Kate Parker-Lentz kicked off the event with a rousing rendition of the National Anthem. Hundreds of students, teachers, police officers, and other citizens then headed out to the field to enjoy a host of activities led by the troops from the New River Air Station near Jacksonville, N.C.
Those in attendance could don a Marine’s vest, look through the sight of a rifle, and try their hand at a pull-up bar, winning prizes for completing different levels of the tiring exercise.
The main attraction was the helicopters themselves. People were treated to an inside look, getting on board to revel in the sophisticated array of buttons, screens, and dials that control the aircraft. Sitting in the helicopter’s cockpit, one could imagine flying thousands of miles away, wind whipping through the air above the
deafening sound of the rotor blades.
Though exhilarating as it was to immerse oneself in the environment of a soldier, it was more riveting to talk to the Marines who live this reality every day. Aircraft Commander Anthony “Cheesecake” Goprey noted, “The purpose of Fleet Week is to do community outreach to the whole New York area, so the taxpayers can see where their money is going and so they can see the new, modern capabilities of the Navy Marine Corps team.”
This sentiment was echoed by Logistics Chief Armando “15” Naylonnavarette, who said that Fleet Week “provides the general public with an interaction with the military service members that they might not see on a regular basis.”
While the event was enjoyed by all, it occurs against the backdrop of Memorial Day weekend. A solemn tribute to those who gave their lives to protect us, Memorial Day takes on a personal tone for many who serve. Goprey acknowledged that, “Everyone in this business knows someone who has passed.”
Through their shared loss, values, and experiences, Marines possess a unique bond, as mentioned by Copilot Lieutenant Fleming. According to Fleming, different generations of Marines unite together- for no matter the specific war – they have all endured.

Naylonnavarette described the Marines as “professional warriors.” Meeting the soldiers who protect the nation instills a sense of national pride – an optimism and belief in the nation’s power.
Reflecting on Fleet Week, Millburn High School senior, Adam Klein, put it simply, “It makes you feel even more American.”