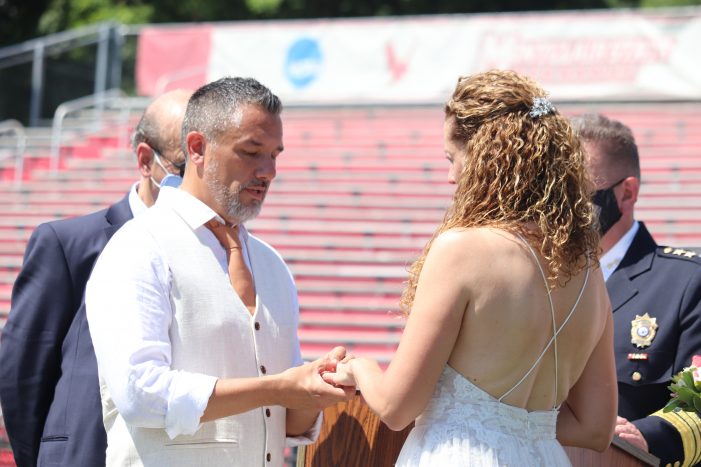 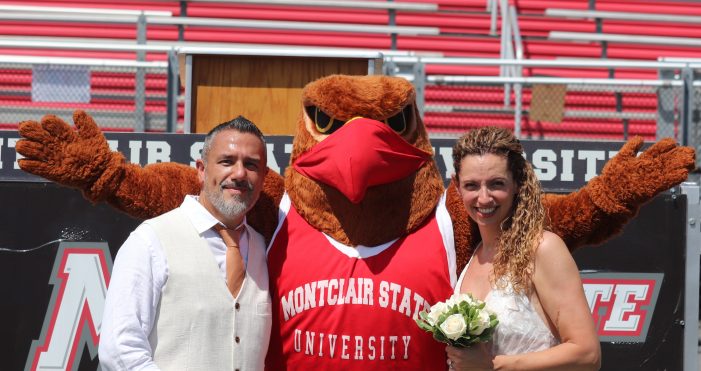 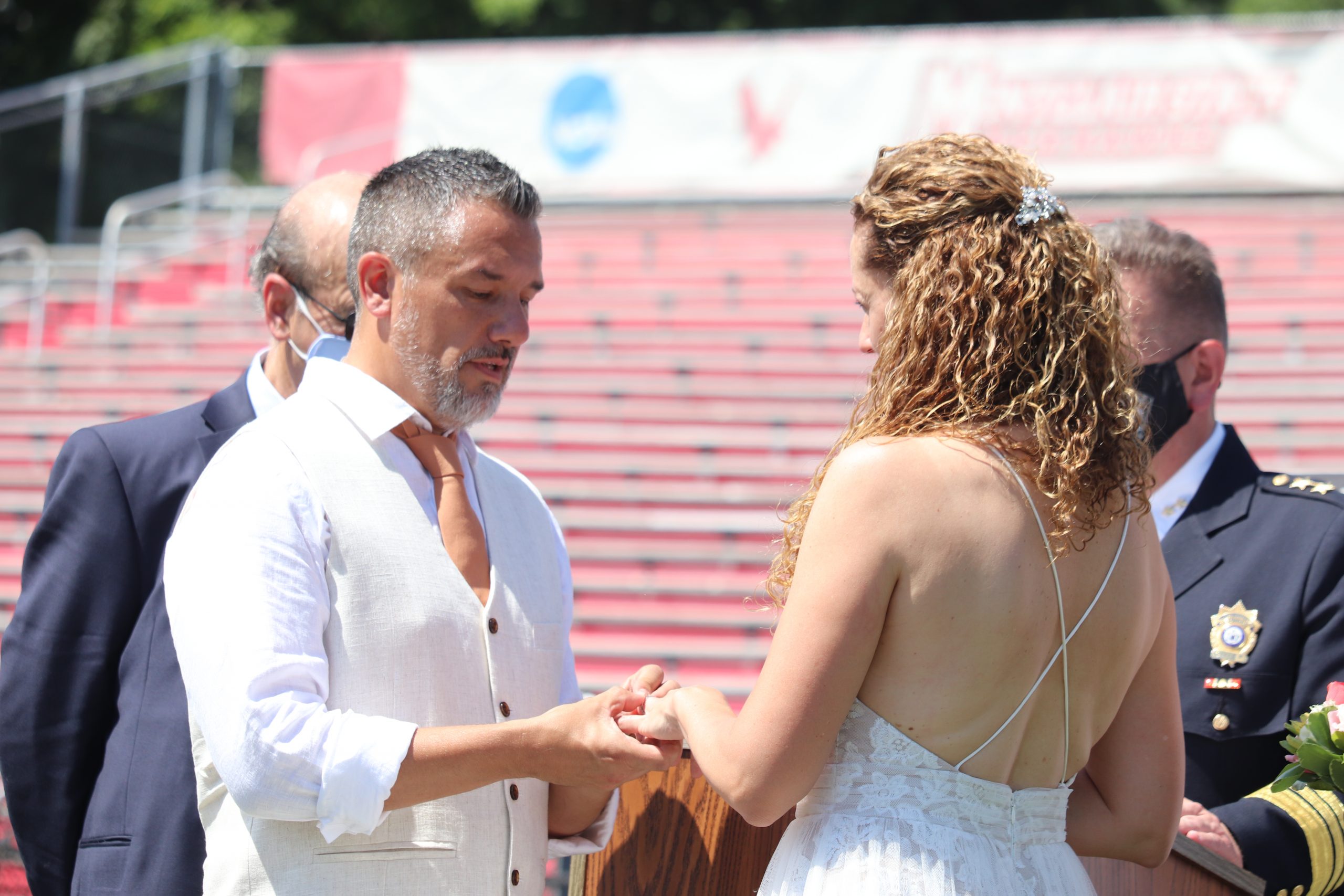 Janet (Jaramillo) Dabice and Greg Dabice were 1993 Montclair State University (then college) graduates. Also, in 1992, they were named Homecoming Day King and Queen, and stood that evening almost thirty years ago at the 50-yard-line on Sprague Field.

“It was a cold, October day,” recalls Greg of the Homecoming . “It was very cold. And Homecoming was real important to our organizations back then. It was pretty much the biggest day of the year, so it was nice for us to be a part of it.”

Fast forward to a warm August 1, 2020, and  the couple celebrated another “biggest day of the year,” a special reunion in the same location, as they exchanged wedding vows to become husband and wife. Montclair State University Chief of Police, Paul Cell, officiated the special ceremony, and Rocky the Red Hawk, MSU mascot, was ring bearer.

The couple lives in Pompton Plains. Janet owns a Graphic Design agency, Defined Marketing, in the same community, and Greg is Director of Procurement for Carl Stahl Sava Industries in Riverdale.

“Greg and I were on completely two different spectrums back in college,” recalls Janet. “He completely  duplicated “Animal House” to a T. And I came from a world where I was on a student government and I was on the track team. I was going to college for the full college experience – sorority,  the whole entire thing. Our paths would have never crossed. It was just not in the stars, because there was no way of dating Greg,” she says with a laugh. “He was undatable, basically.” Yes, there was the “Animal House” part of the equation, but Greg was also dating one of Janet’s best friends from high school, so he was even further from a thought in her mind. However, she does remembers seeing him at Homecoming and thinking he was adorable. “That’s it, look away, look away,” she says with a laugh, remembering her mindset that chilly day. “Don’t even go there, you know what I mean?”

27 years later, with both having been married, had children, and were now divorced, Janet came across Greg’s profile on a dating app. “I basically just swiped right on him. There was something about him; he just looked so sweet. And it turns out that he reaches out to me immediately and says, ‘Oh my God. Janet, is this you?’”

It was a revisit to the online dating game for Greg, and lightning struck immediately. “I just felt at that point I think, ‘I’m ready.’ I really felt I had grown a lot in the past months and years. I just felt like this was the time, so I got on the app and within 24 hours, Janet appeared, and it really felt like it was guided. Since day one, I feel like it’s being guided.”

After reconnecting, the couple’s first date was on April 2, 2019 at BJ’s Restaurant & Brewhouse in Nanuet, New York. From there, things blossomed.

“I hadn’t been back since that Homecoming Day,” Janet says of August 1, 2020. “I mean, coming down the bleachers on the day that we were married, it wasn’t until I stepped on to the field that it all became like, ‘Wow! Here we are again!’ It was just amazing. ‘Wow! Here I am getting married!’ And he was waiting for me at the end of the 50-yard-line. Surreal, that’s the word I would use. 100%.”

After six months of marriage, Janet and Greg find pleasure in the simple things. “I said to him, you know what’s really awesome is when he comes home from work – I work from home – and I’m ending my day, and being able to say, ‘Hey, let’s go watch something on TV,’ or, ‘Let’s go sit on a couch and enjoy each other’s company.’”