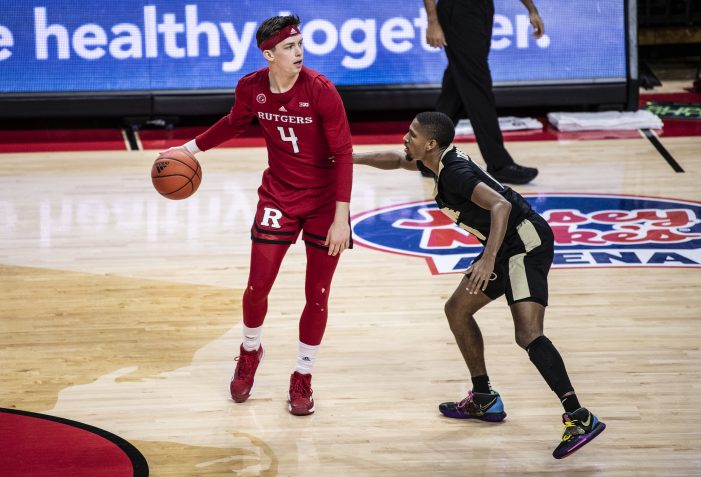 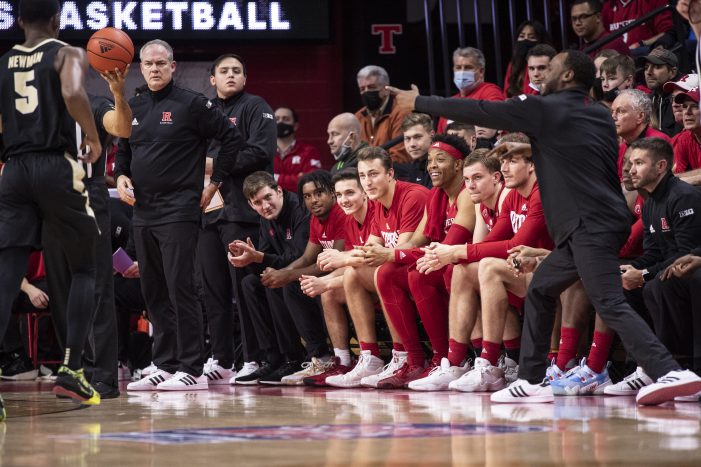 “I knew as soon as Trevion Williams made that hook shot, I knew Ron was there to try to get the ball and do what he could with it,” Nathan, the former Randolph High School basketball star, says of the December 9, 2021 contest where his Scarlet Knights faced the #1 ranked Purdue Boilermakers. “He crossed half court and he shot the ball up. It looked good when it came off his hands, and I watched it go in. The rest of it is kind of a blur. It was crazy.”

The Scarlet Knight fans stormed the Jersey Mike’s Arena (affectionately known as “The RAC”) court as Harper’s 35’ heave was a buzzer beater, propelling Rutgers to a 70 – 68 win. It was the first ever defeat of a nation’s top ranked team for Scarlet Knights men’s basketball.

6’ 6” junior guard, Paul Mulcahy, who had played almost every minute of the game, was on the bench, head down, eyes closed, and praying. His team was leading 67 – 66. He heard the Purdue fans react after the Williams hook shot, giving them a one-point advantage.

But things would quickly change.

As Harper headed up court with three seconds left, Mulcahy kept praying scripture passage Isaiah 54:17, “No weapon formed against me shall prosper.” Recommended to him by a mentor, it was his first time using the prayer. He explains the next set of events. “I didn’t see the shot going (in). There’s a picture of Ron taking the shot, and I’m on the bench with my head down, my eyes closed, just praying. As soon as he hit (the shot), I was the most delayed reaction on the bench.” Everyone was gone, his teammates on the court trying to get to Harper. “By the time I opened my eyes, I asked, ‘Did we just win?’ Everyone was storming the court.” Mulcahy’s girlfriend, Katie, was the first to reach him among the throng, she hugging him tightly in jubilation. “I even teared up a bit,” he says. Katie was joined by Mulcahy’s little brothers, all congratulating him as he and the Knights were engulfed in a sea of fans clad in red. “It was a really awesome moment.”

Nathan, who was a three-year starter at Randolph, was both a First Team All-Morris County and First Team NCAC All-National Conference selection as a senior when he averaged 14 points per game. In 2017, he was being recruited by Patriot League and Ivy League schools when Rutgers said they had a walk-on spot if he wanted it. He did. “I was thinking about and it was really hard to pass up an opportunity to play for my state school, and in the Big 10,” he recalls. “I’m obviously really happy with my decision. I love Rutgers more than anything, and I’m really blessed to be in the spot I am.”

Mulcahy, also, is no stranger to success. When he played at Gill-St. Bernards in Peapack-Gladstone, he averaged 18 points, 10 rebounds, and 10 assists per game as a senior. During his career, he was a three-time Skyland Conference Player of the Year, and in his senior year was named First Team All-State by NJ.com. He has played regularly for Rutgers since his “On the Banks” arrival in 2019. “I’ve learned a lot the last two and a half years,” he says fondly. “I play in the Big Ten, which has been the best conference in America the last two years, and I think I’m really growing as a person from a leadership role. I feel much more poised now than I ever have on the floor.”

For the 6’ 11”, 240 lb. Nathan, the list of memories continues to grow. “When I first came to Rutgers it obviously wasn’t a highly regarded program,” he says, “but I think my teammates have really done a great job of turning this program around. There are so many memories, like going to an NCAA tournament, and winning an NCAA Tournament game. Obviously, the Purdue shot is up there, and beating the number one team on your home floor.” Finally, he and the Knights in early January scored a win over the Michigan Wolverines. “That was the last team that we needed to beat (in the conference). Now we’ve beaten every single Big Ten team at least once. It’s just been a great journey.”

“I really just came here to win,” says Mulcahy. “For myself, for the state, for the alums, and for the Rutgers men’s basketball program.”