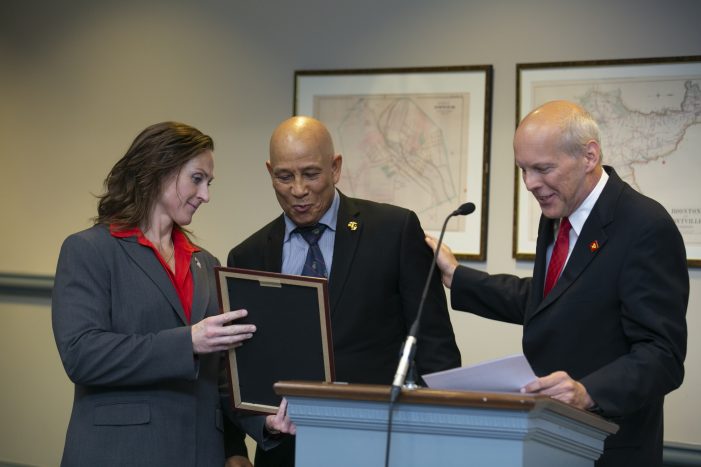 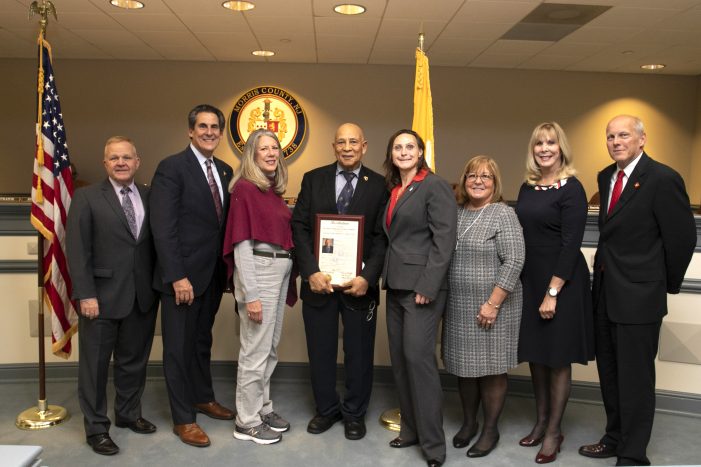 The Morris County Board of Freeholders is honoring the United State Marine Corps on its 244th birthday, celebrating the founding of the Marines by the Continental Congress in 1775.

The Marine Corps Birthday is marked each year on Nov. 10 with traditional ball and cake-cutting ceremonies held at locations across the nation.

Here in Morris County, the Freeholder Board highlighted the occasion at its recent Veterans’ Day event on Oct. 23 in remarks made by Freeholder and Marine Corps veteran John Krickus.

In addition, the freeholders held a special recognition ceremony for Marine Corps veteran Emerson Cooks of Randolph, as a representative of all Marines.

“We would like to call attention to one particular Marine who served his country with honor on the battlefield, and in civilian life has offered exemplary service to his state and county,’’ said Freeholder John Krickus.

“Marine Corps veteran Emerson Crooks of Randolph is being honored for his outstanding service to his country in Vietnam and steadfast support of all veterans. It is most fitting to honor this decorated Marine on the 244th birthday of the USMC.’’

Mr. Crooks served as a Marine from 1968-1972. For that service, he received the Legion of Merit and a Valor Designation for heroism.

As a civilian, he has been a strong advocate for veterans — at Lyons VA Hospital and through other veterans’ organizations — and he is vice president of North Jersey Stand Down, which reaches out to homeless veterans.

In addition, he is an advocate on behalf of juveniles in the court system and an advocate for residents who suffer mental illness, through his efforts for the Mental Health Association of Essex and Morris Counties.

“Emerson Crooks, in his military and civilian lives, always has proudly lived up to Marine Corps standards,’’ said Freeholder Krickus in presenting him with a special county resolution.

On 10 November 1775, the Second Continental Congress resolved to raise two battalions of Marines. Congress commissioned 31-year-old Samuel Nicholas, a well-known Philadelphian, as captain of the fledgling force of Continental Marines.

From Tun Tavern in Philadelphia, Nicholas raised two battalions of Marines as directed and began the long illustrious history of the United States Marine Corps, which now has is 190,000 active duty personnel strong, with deployments across the world.

Every year since 1925 the founding of the Marine Corps has been celebrated with a Birthday Ball. It is one of the biggest social events of the year for leathernecks all over the world.

The Marine Corp’s birthday cake-cutting ceremony is important to all Marines, as it is an annual renewal of each Marine’s commitment to the Corps.

Learn about the Marine Corps’ birthday tradition at https://mca-marines.org/resource/marine-corps-birthday/