Girls Who Code Moving Forward at the Kinnelon Library 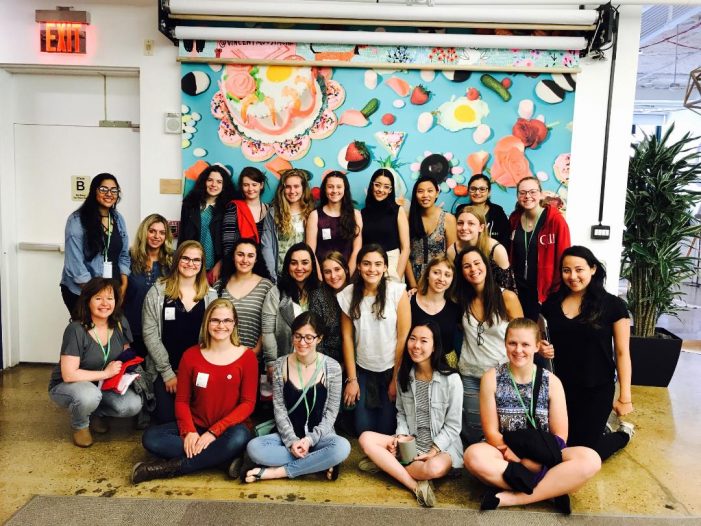 Nice things are technologically happening at the Kinnelon Public Library. Fifteen young women, all residents of Kinnelon and attendees of Kinnelon High School, are members of a Girls Who Code club which meets once a week.

Girls Who Code is a 7-year-old international non-profit organization whose mission is to close the gender gap in technology. “One way we do so is with our free after-school clubs,” says Eve Balick, who has been the Regional Partnership Coordinator in New Jersey for Girls Who Code for two years. Balick initially discovered Girls Who Code online when her daughter, Caroline, sought to learn computer coding but found no available programs. Her mom took the Girls Who Code online facilitator training, and the Balick duo started the local unit three years ago. Caroline, then a freshman, now is entering 12th grade. “We also have an advocacy department and an alumni program.”

In totality, Girls Who Code across the nation number about 90,000 members.

Balick’s role entails doing outreach to start new, free Girls Who Code clubs in New Jersey. Her seed sowing is reaping benefits. In 2018-19, the Garden State had over 340 clubs. Clubs can be hosted at schools, libraries, non-profit locations and colleges. Girls Who Code is also starting a technology intro to younger girls. “We offer 3rd-5th grade clubs and 6th-12th grade clubs. We also have a free Summer Immersion Program, a 7-week program for 10th and 11th grade girls at top tech companies around the state.  I do outreach to share that information with students, too,” Balick says.

The Kinnelon group created a website impacting their community relating to sustainability and ways they can help locally, and they have taken field trips to Instagram, Giphy, and Twitter’s New York office to meet with female software engineers, thereby further immersing themselves in the field. They also showcased the work of their club at Kinnelon Library during New Jersey Maker’s Day. “The girls who graduated already have gone on to study computer science in college at Rutgers and RIT (Rochester Institute of Technology),” states Balick proudly.

The goal is to keep technology on the forefront for the ambitious young women. “Like most Girls Who Code club alumni around the country, these local club members are way more likely to study computer science in college than if they didn’t join Girls Who Code.  I have had several girls in the club tell me that they plan to study computer science in college either as a major or as part of their course work. Girls Who Code as a whole is shooting for 10,000 free clubs in the 2019-20 school year, engaging so many girls in computer science with the goal that they will consider joining the technology workforce in the future,” says Balick.

For more information or to start your own Girls Who Code chapter, visit www.girlswhocode.com/Clubs.