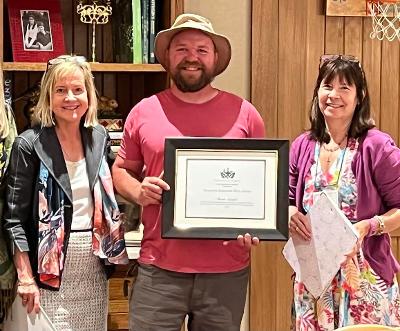 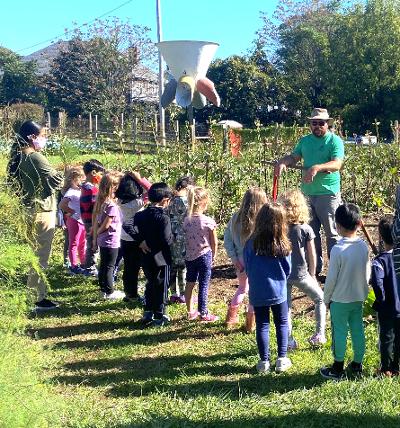 Shaun Ananko, Director of Agriculture and Education for Grow It Green Morristown, is giving a short tour of the township’s Urban Farm.

One of the things he and his team are growing are tomatoes – on string. “We’re just adapting a lot of what’s being used in regenerative farming,” he says as he walks into a farming tunnel, surveying the bright red fruit. “I’m always trying new things that I read about so I see how I can adapt to increase our yield.” He then reaches out and gently caresses the plant. “We’re going to do what they call Lower and Leaning. When the tomato gets to the top, we’ll actually be able to pull more of this string down and we’ll shave all of this growth in here, and we’ll be able to coil the tomato. We’ll be able to get an extra eight feet of growth out of the tomato over the course of the season. So, this is something new, and this tunnel actually moves. We can take this apart probably in a day and a half, and what we’ll do is move it on top of another crop that will carry off into the winter, like spinach or arugula or lettuce.

Ananko, a County College of Morris graduate with a degree in Agriculture, in May was awarded by the Garden Club of America its Elizabeth Abernathy Hull Award for Early Environmental Education. “I was very surprised,” Ananko, who is in his 12th year with Grow It Green Morristown, says. He was nominated for the recognition by the Garden Club of Morristown, but was unaware of his nomination and award win. “So, I’m going to the Garden Club’s annual meeting, and Lisa (Alexander, Grow It Green Morristown Executive Director) had me giving a presentation about the community garden. She surprised me. And then I was getting a little frustrated. I asked her, ‘What am I talking about here?” And she wasn’t giving me a clear answer. And then when we get up there, I realized that they were actually giving me this award, and I thought it was really thoughtful. It was very nice.”

Ananko and his team have kept a caring eye over the four-season growing Urban Farm, helped start the Early Street Community Garden (which has grown from just 20 original garden beds to 92), grow crops at Saint Elizabeth’s University greenhouses, and also host the Morris Winter Farmers Market.

Sustainability farming and healthy eating have been at the forefront since Grow it Green Morristown’s beginning, and still is now. Urban Farm was initially a pre-school playground. When it was no longer being utilized, the Grow It Green flounders approached the school district about their farm idea. It’s been 11 years of an ongoing project. “This space was started with the idea of teaching kids about where their food comes from,” Ananko says while continuing his walk though Urban Farm. “And then, also having school gardens have longevity. The idea that Grow It Green had was to hire a farmer to manage the space throughout the summer, so that when the students returned in the fall or we come out of winter, there’s a place to do this learning. It was originally a half acre in size, and we worked with the preschool here, and then we worked with a couple of second grade teachers at a few of the other schools.” When word got out, more teachers became interested, and that involved more students, and Grow It Green Morristown looked at different farm-based curriculums and discussed with science teachers how it would tie in with the students’ learning.

And it’s come full circle, in a way, for Ananko. As a school aged child himself while growing up in Morristown, he learned basic farming techniques when his mother showed him how to grow tomatoes at home in their own garden. He also interned at Morristown’s Valley Vue Farm. “I think these kinds of programs are very well received, no matter where you are in the country,” he says. “And then the local community really enjoys it.”

In addition to education and hands-on growing various vegetables like tomatoes, garlic, cucumbers, and much more, Grow It Green Morristown also donates the food – 11,000 pounds worth in 2021.

And as for his award, it is indeed for him – and those he has educated while doing what he loves. “It’s nice that people have recognized over the past 12 years all of the kids that I’ve taught, or the influence we’ve had on environmental education, and just teaching kids about produce and how good it tastes.”