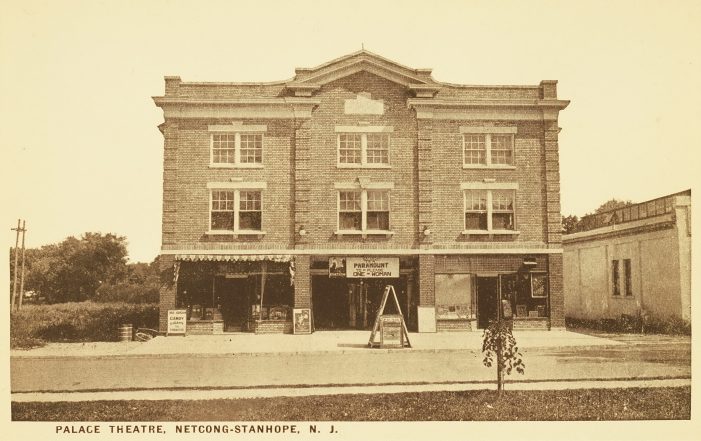 Palace Theatre, Netcong, circa 1920, shortly after construction (Banner advertises To Please One Woman, a 1920 silent film) 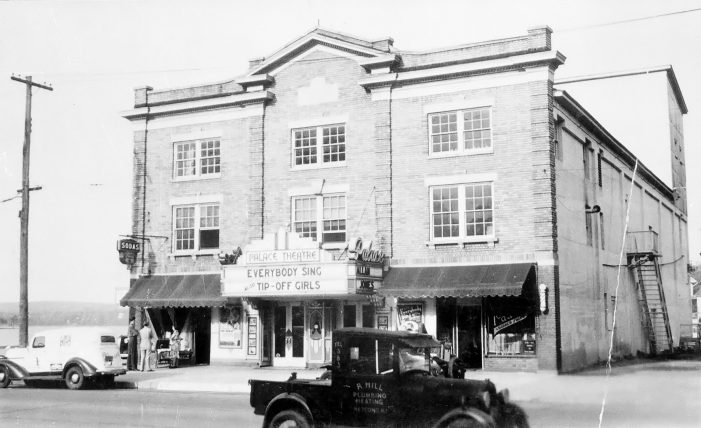 Palace Theatre circa 1938, after addition of the marquee. (Everybody Sing is a 1938 movie starring Judy Garland)

It’s an iconic building on Ledgewood Road in Netcong, backing up to Lake Musconetcong.

Officially named The Historic Palace Theatre, it has been home to The Growing Stage since 1995, but it is celebrating its 100th birthday this November.

The Growing Stage was the brainchild of Stephen Fredericks, who is still executive director, when he first graduated from Arizona State University. His theater major included a specialization in theater for young audiences. He started it in an old school in Chester Borough. The borough wanted to sell the school after The Growing Stage had been there 13 years, but Fredericks thought it was too big a risk to buy that building and went looking elsewhere.

When he found the Palace it was on the “let it burn” list of the local fire department. The Growing Stage bought it one day before it went to sheriff’s sale, for $100,000. Now it’s on the National, New Jersey and Morris County registers of historic places.

It was a fire trap, he admitted. “There was trash from backstage to the front door.”

Trash and treasures, it turns out. Under a pile of mattresses, they found an old pump organ. It’s now on the balcony, in need of repair but potentially useable.

The fly building over the stage had no roof, but Ronetco Supermarkets came to the rescue with a $45,000 grant, the first of several. “The Romanos are pivotal to the Growing Stage,” Fredericks said.

Fredericks wasn’t an expert in local history but he found someone to research and found the theater was full of history.

The building was actually constructed in 1919 by three local businessmen who were unhappy that none of the local schools had a place for graduations or school plays. It started as a community arts center, then ran silent movies and served as a vaudeville house.

Before the present time, The Palace’s finest hours were during the 1930s when Broadway and film actress Pauline Frederick who summered at Lake Hopatcong, pulled together a group of actors and actresses who also escaped New York City’s summers and created the Hopatcong Broadway Players. They used it to try out new material.

After its movie theater days, the building was used by a moving and storage company, which accounts for some of the detritus left inside. Cluttered and decrepit as it was, it was salvageable.

Part of The Palace’s history is that it is one of the first five buildings of poured concrete construction because of the steel shortage after World War I. Local lore had it that the workmen were given a fifth of whiskey at the end of each day. Fredericks was skeptical until they found empty fifths behind wood panels.

The staff and board of The Growing Stage has raised more than $3 million for the reconstruction. “With in-kind donations and volunteers, it was probably closer to $10 million to restore.”

Much of the money came from the Morris County Historic Preservation Trust Fund’s grants. Volunteers came from parents of the children who had been involved in Chester and new friends the group made in the Netcong area.

Fredericks said The Growing Stage is fortunate the theatre wasn’t split in two like The Strand in Hackettstown or the Washington Theatre. That would have made restoration more complicated.

There is still more the staff wants to do. They are researching a fly system now, so they can store scenery above the stage, according to Danny Campos, audience development director.

The Growing Stage is known as The Children’s Theatre of New Jersey. Fredericks puts on productions of familiar tales, often with a twist, and some less familiar stories. Children’s theater classes and camps are also offered and the Stage has offered special programs, such as dance troupes. They offer Broadway master classes, play readings and have partnered with the Lake Hopatcong Historical Museum to present programs. One was a film series, another a one-woman show of “Lotta Crabtree.”

Campos said they will continue to partner with the museum.

Meanwhile, Growing Stage board member Laurie Kane is creating an exhibit space on the balcony. The old lighting control board is on a wall with photographs and newspaper clippings, plus a painting of the Palace by Hackettstown folk artist Ann Reeves.

“We are process oriented,” Fredericks said, noting that most of the children involved in The Growing Stage won’t become theater professionals. “We want young people to apply what they learn to anything they choose to do. This is an opportunity to create a memory.”

Nov. 10 is the 100th anniversary of the opening. More information is available at www.growingstage.com