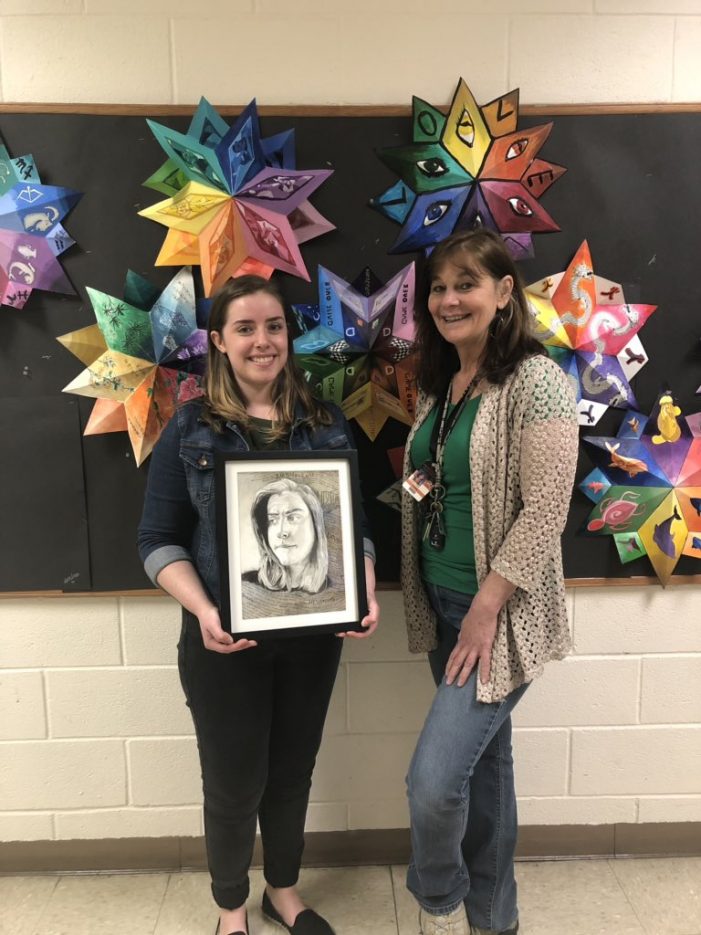 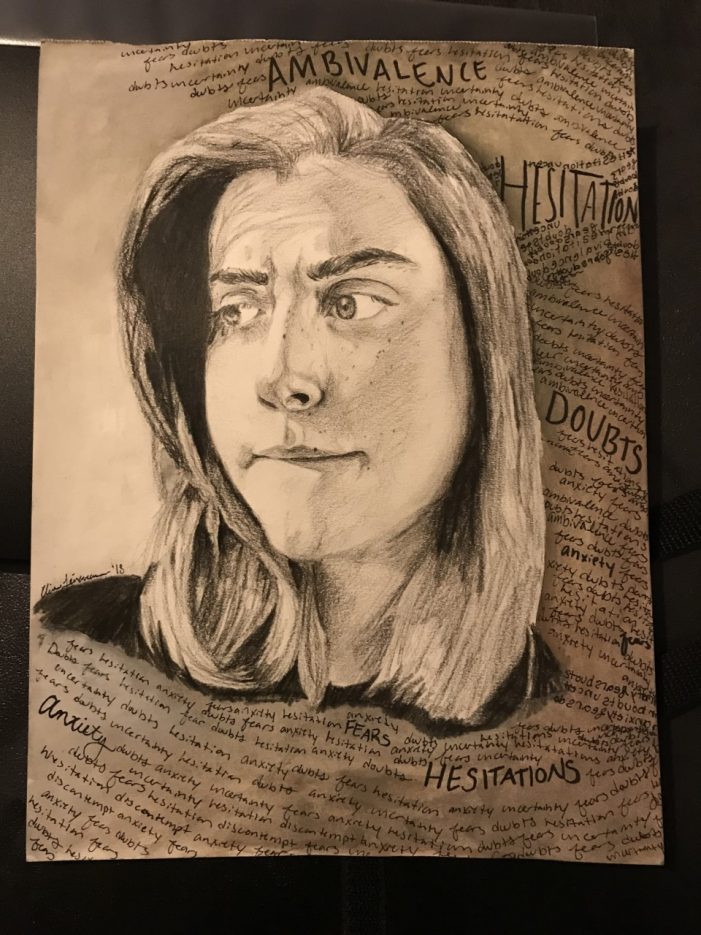 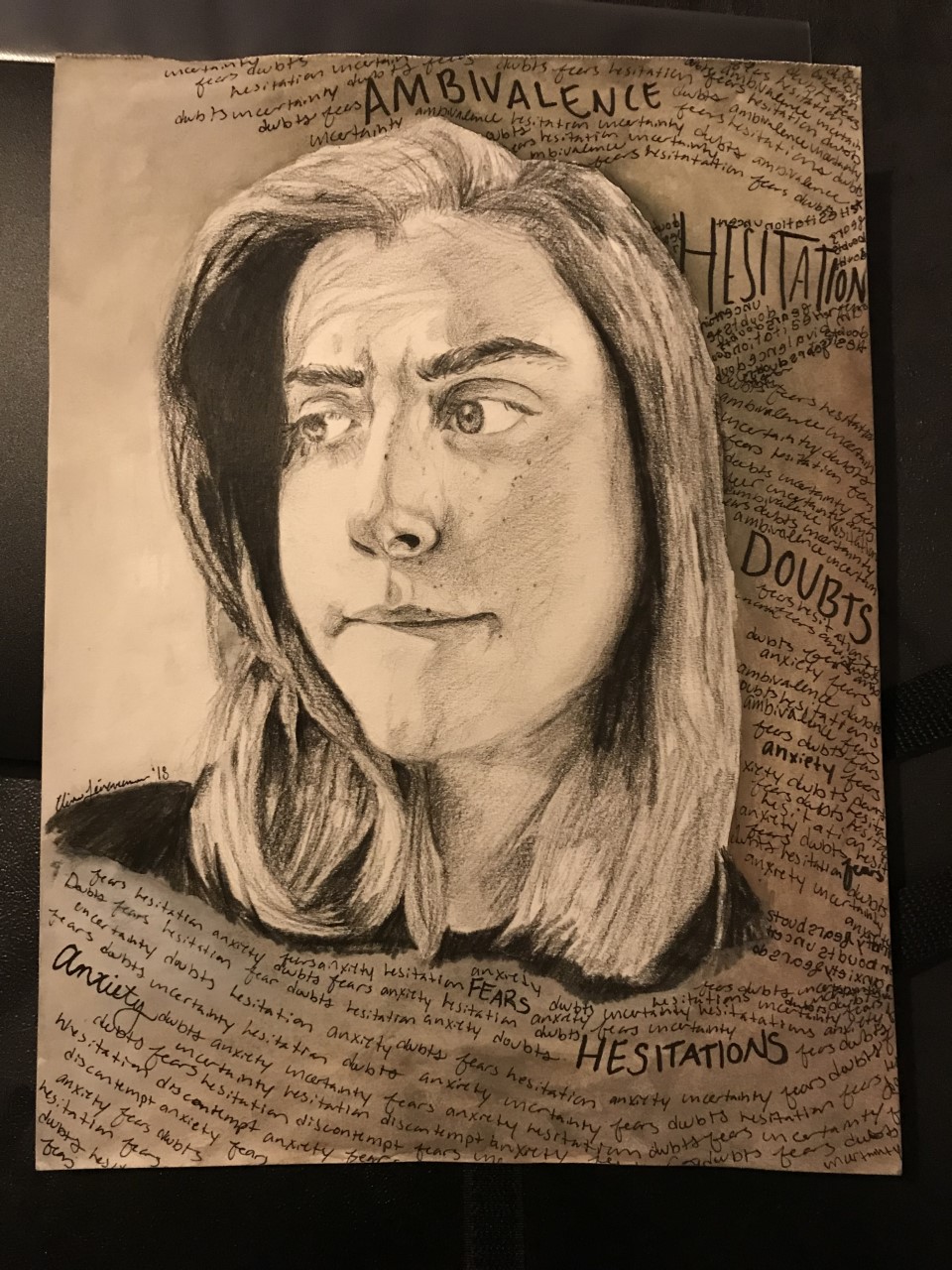 Elise Leinaweaver, a senior at Hackettstown High School, is the first prize winner of the 5th District 2019 Congressional Art Competition. She entered a self-portrait that she created in a summer art course. The assignment was to capture Eduard Munch’s expressive emotional style by interpreting it through her own life. Her response was a heartfelt rendering of her face with a worried expression surrounded by words expressing her insecurities and anxiety called Self Portrait #2.

The annual competition began in 1982 to acknowledge the importance of art and to recognize artistic talent across the country. More than 650,000 high school students have participated since the inception of the competition. All of the participants received a congressional commendation and special recognition at the district ceremony on May 4, 2019.

Leinaweaver’s self-portrait will be hung in the the Capitol Building for a year. She also received roundtrip airline tickets to Washington, D.C. to attend the National Art Competition Ribbon-Cutting ceremony in June.

Leinaweaver says she remembers drawing all the time as a small child although she didn’t consistently take formal classes until high school. She enjoys working with charcoal, shading pencils and colored pencils because her first foray into art was drawing. Now Leinaweaver is experimenting with paint. She said, “I’ve found a new love for painting and I’m really enjoying exploring that specific area of art.”

She began studying art informally when she was around thirteen or fourteen by observing other artists’ methods. She took some art classes for a while. In high school she started becoming more serious about being instructed in art and and took several classes and she continues to study art and teach herself techniques at home.

Leinaweaver’s favorite subjects are landscapes and portraits. She talked about her current project of creating a, “mini concentration for my art class which is a series of portraits at the moment, but I like them because perception can be a very interesting focal point within that type of art. The artist can perceive someone in an interesting sort of light and mimics that view point to their audiences which I think is really fascinating. It can create something very cryptic and acts almost like a puzzle which I think is incredibly clever. In terms of non-painting artwork, my subject matter ranges mainly in still lifes or portraits because I am still learning as an artist.”

Leinaweaver’s inspirations include Van Gogh, Frida Kahlo, Cindy Sherman, Yayoi Kusama, Alphonse Mucha and many others. She also cites music, friends, family, scenic places and “the happiness she sees in other people” as muses.

Next year Leinaweaver will attend Lesley University and plans to major in Art Therapy. She knew at an early age that she’d want to pursue an occupation involving art as an adult. While researching art fields she discovered art therapy. She’s already dabbled in art therapy as a volunteer.

“I ended up volunteering at a bereavement center last year with a grief group for children where the counselors used art as an expressive field for the kids to open up about their feelings. Going through that really solidified my decision of wanting to become an art therapist. The way that I saw how art could really change people, even in the smallest of ways, was really beautiful and I knew I wanted to do something like that as a career.”

She understands the power of art and also feels that creating art is therapeutic for her. When she immerses herself into drawing or painting she feels her anxiety and stress melt away.