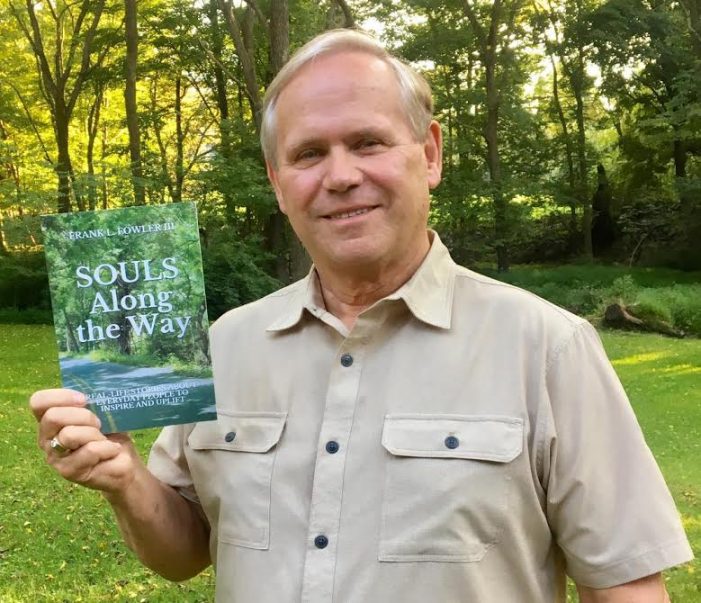 A little boy who comes to church to pray for his mother before her surgery, a person with Lou Gehrig’s disease whose last wish is to come to worship one last time, and a young mother whose child ran away from her into traffic and was killed by a car, these are some of the souls which Rev. Dr. Frank Fowler III has met along his way.  For two decades, Fowler has been sharing vignettes, which illustrate deep points while touching the spirit, through a weekly column, “On My Mind”, in the newsletter of Trinity United Methodist Church in Hackettstown. Now, he’s put many of those and other vignettes, in a book, Souls Along the Way.  The book is available through Amazon or can be purchased at the church for $12.95. Ten percent of the proceeds of the book sales go to Trinity United Methodist Church

Fowler’s column started with a letter to his congregation in 1999.  Fowler, the senior pastor at the Hackettstown church, was on renewal leave and away from the church when the Columbine School shooting took place. The first mass school shooting in this country, it shocked many people.  Being away, Fowler thought he should send the congregation something to give them support. Not having a computer with him, he found a kiosk PC and sent the congregation a letter which became the first of the weekly, “On My Mind”.

Fowler noted that he doesn’t pre-write any of his weekly columns   Some are stories about people; some are on national events. He looks for something relevant to the church and basically shares, “what’s on my mind”, he said.   That sharing has garnered hundreds and hundreds of stories. They range from the story of Trey and Jesse, a special Olympics athlete and his coach to that of a teen from New York. Stephen, who finds himself lost in Hackettstown and comes to the church to help him get home.  Each vignette reflects a greater truth, whether it is about the bond of love or that regardless of the situation, when we are lost, God and the church are there.

In this book, Fowler shares 51 vignettes, some of which are 35 years old.  “I think of myself as a storyteller,” said Fowler of his vignettes and those stories he shares in his sermons.  He describes the ones he selected for the book as “very compelling” and ones that “begged for telling”.

The book is divided into five chapters.  Chapter One covers young souls and has stories of children and young adults.  Chapter Two covers inspirational souls, uplifting spirits. Chapter Three is on seeking souls, while Chapter Four is on faithful souls, people who have gone through adversity and persevered.  Chapter Five is “Some Other Souls” and includes stories that didn’t fit into any other category. Included in the book are a few stories from Fowler’s experiences during church mission trips to Haiti, a place near to his heart. Those include being there during an earthquake and baptizing a Haitian baby who died a few months later.

Now that the book is out, Fowler shared his hope for it.  “I hope people will reflect on the fact that every person is not just a body, but also a soul created by God [and] that it is the things of the soul that matter most in life,” he said.

What about the stories that didn’t get shared in this book?   Fowler already has plans for those, with another book to be called, More Souls Along the Way.