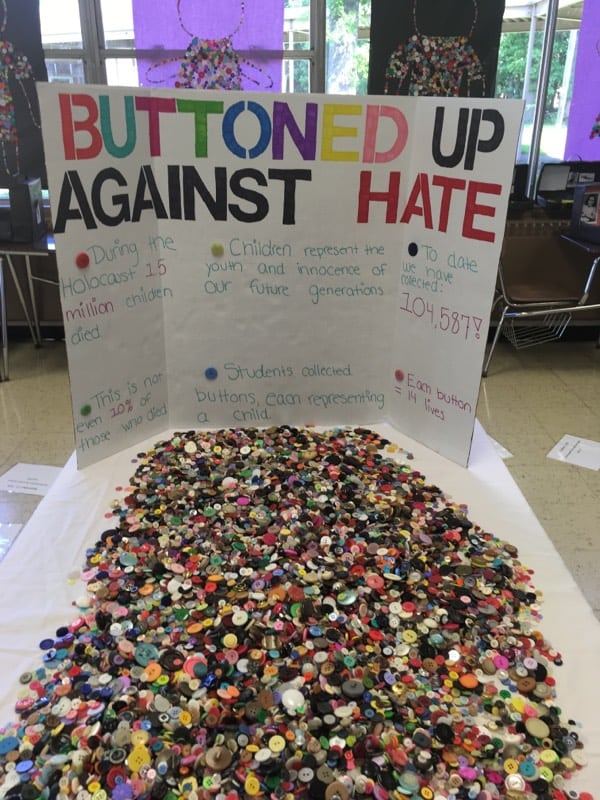 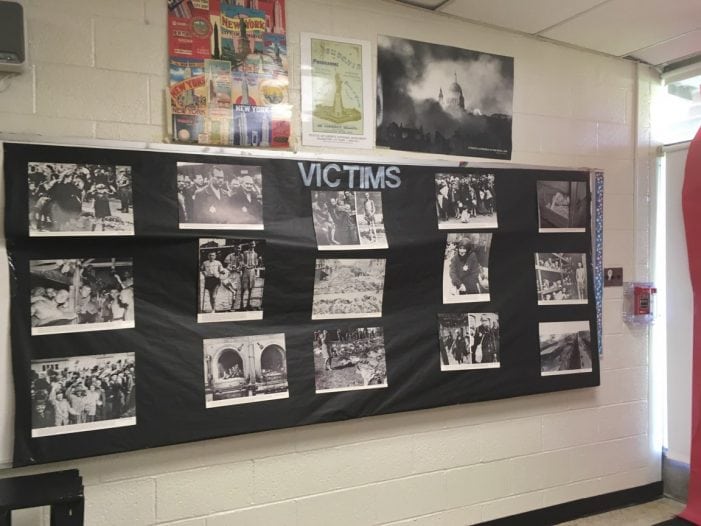 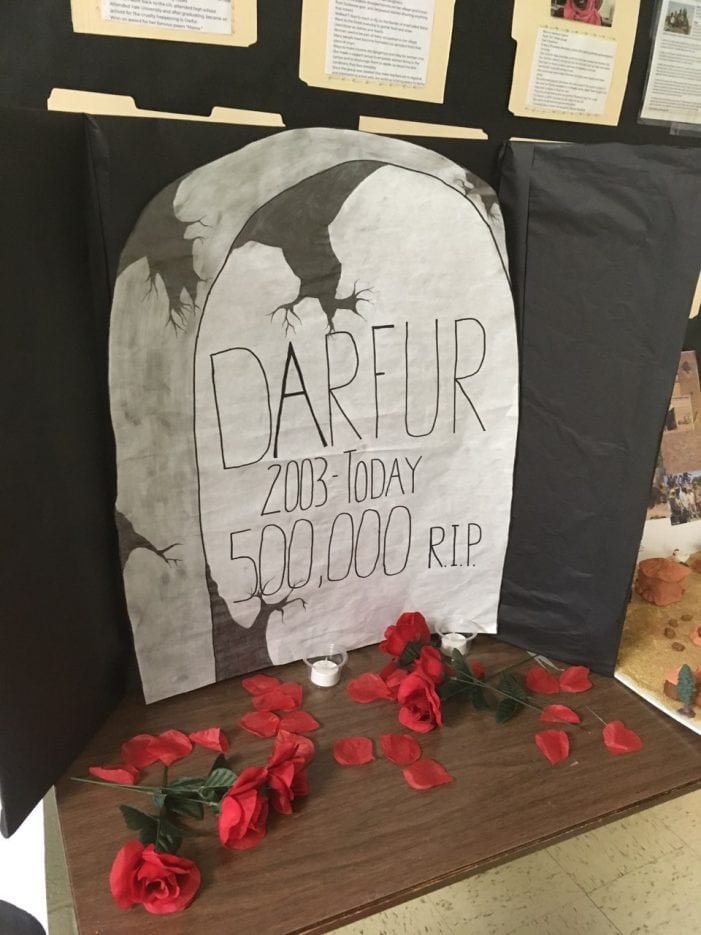 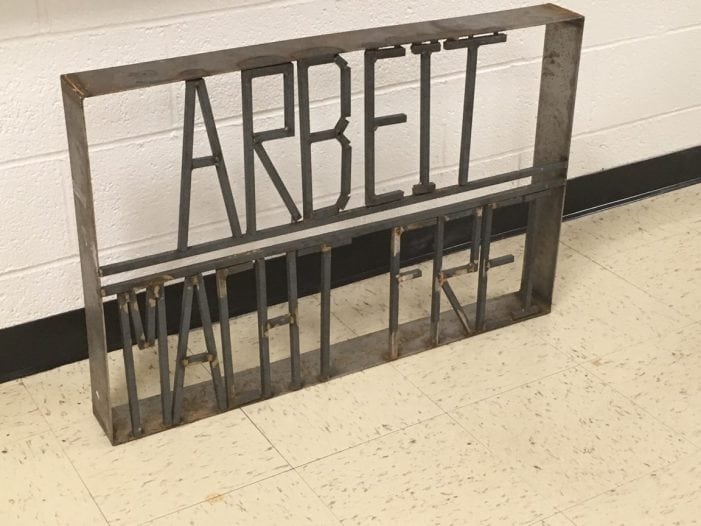 By Kerry Breen
Hanover Park Regional High School hosted the 2018 Genocide Studies Gallery Walk, a project put together by students throughout the year.
The walk, which focuses on multiple genocides throughout history and the history associated with them, is meant to spread awareness and inspire efforts to prevent future hatred.
The presentation this year was themed “Looking from My Perspective.” This is the seventh year that the project has been presented. 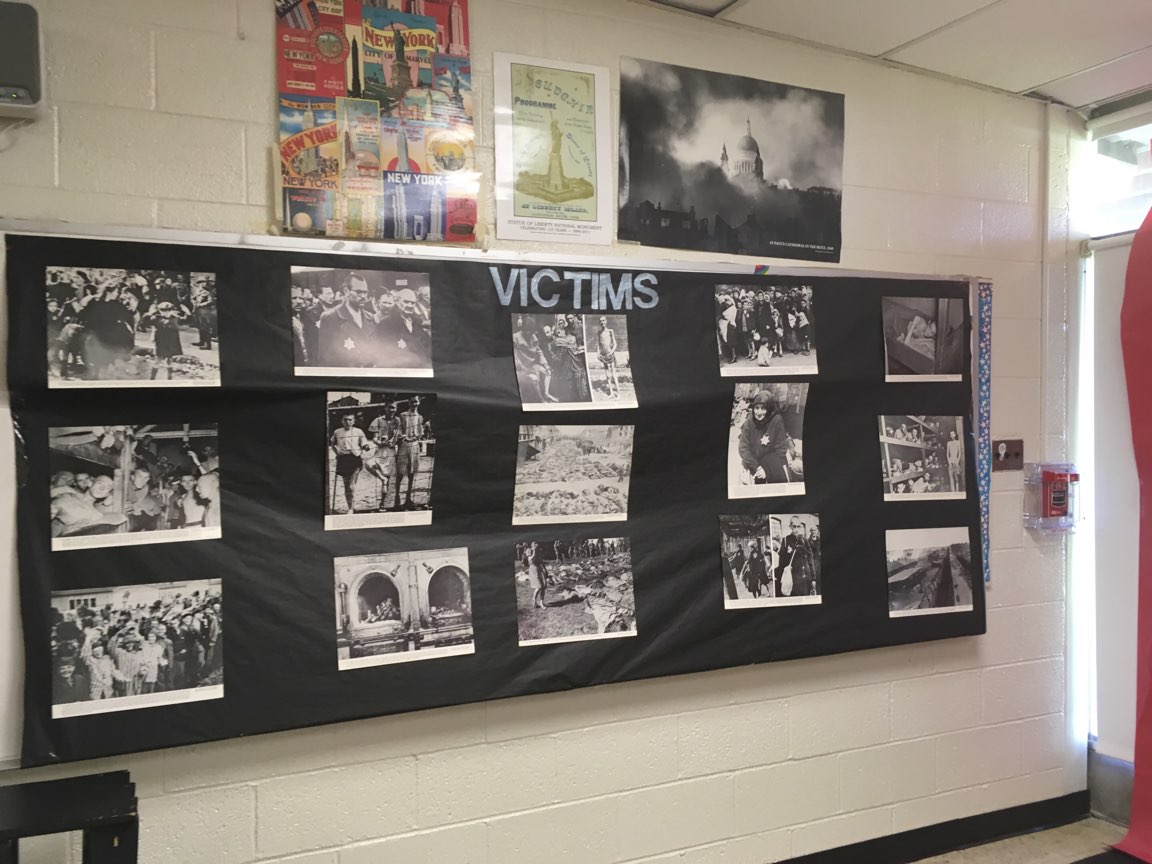 “We wanted to raise awareness of the Holocaust, and how important it is to basically get kids to know about it, as well as for them to treat everybody respectfully and treat everybody equally,” said Jamie Boszko, a history teacher in the district who spearheaded the project and teaches a genocide studies course at Hanover Park. “Out of that, it was ‘Well, we need to focus more on this Holocaust education, we need to get everybody on the same page, and it’s important that everybody respects everyone else, and to learn from the lessons of the past.”
“We want to make a better future for our kids, and other generations,” Boszko continued. The project dominated a hallway at Hanover Park, using multiple classrooms and the corridor to present the walk. According to Matt Cardoso, a senior student who was involved in the event, the project was school-wide, with students from multiple
classes and grades participating.
“We kind of started, in the beginning of the semester, with smaller projects such as printing things out, and we did a project where we had to put three items that somebody would put in a suitcase if they were told to leave their house, and then it kind of turned into each of the little projects culminating with the different classes, and putting this all together,” said Cardoso, who is taking genocide studies as an elective course and was involved with the walk for the first time this year.
The walk opened with a model of the gate that had been the entrance to Auschwitz. Attendees then followed footprints that led from one room to another. Work in the hallway highlighted families that were lost. Students were tasked with finding pictures of families before the Holocaust and other genocides had happened.

The rooms highlighted the history of different genocides, including detailed information about the stages of genocides throughout history and around the world. Stages included classification, discrimination, persecution, extermination, and denial, among others. Another room highlighted the Nuremburg trials, with paper gavels hanging from the ceiling representing the punishments that Nazis were given. Another focused on the children that were lost to the Holocaust. The
final room in the walk focused on reflection and the importance of forgiveness. 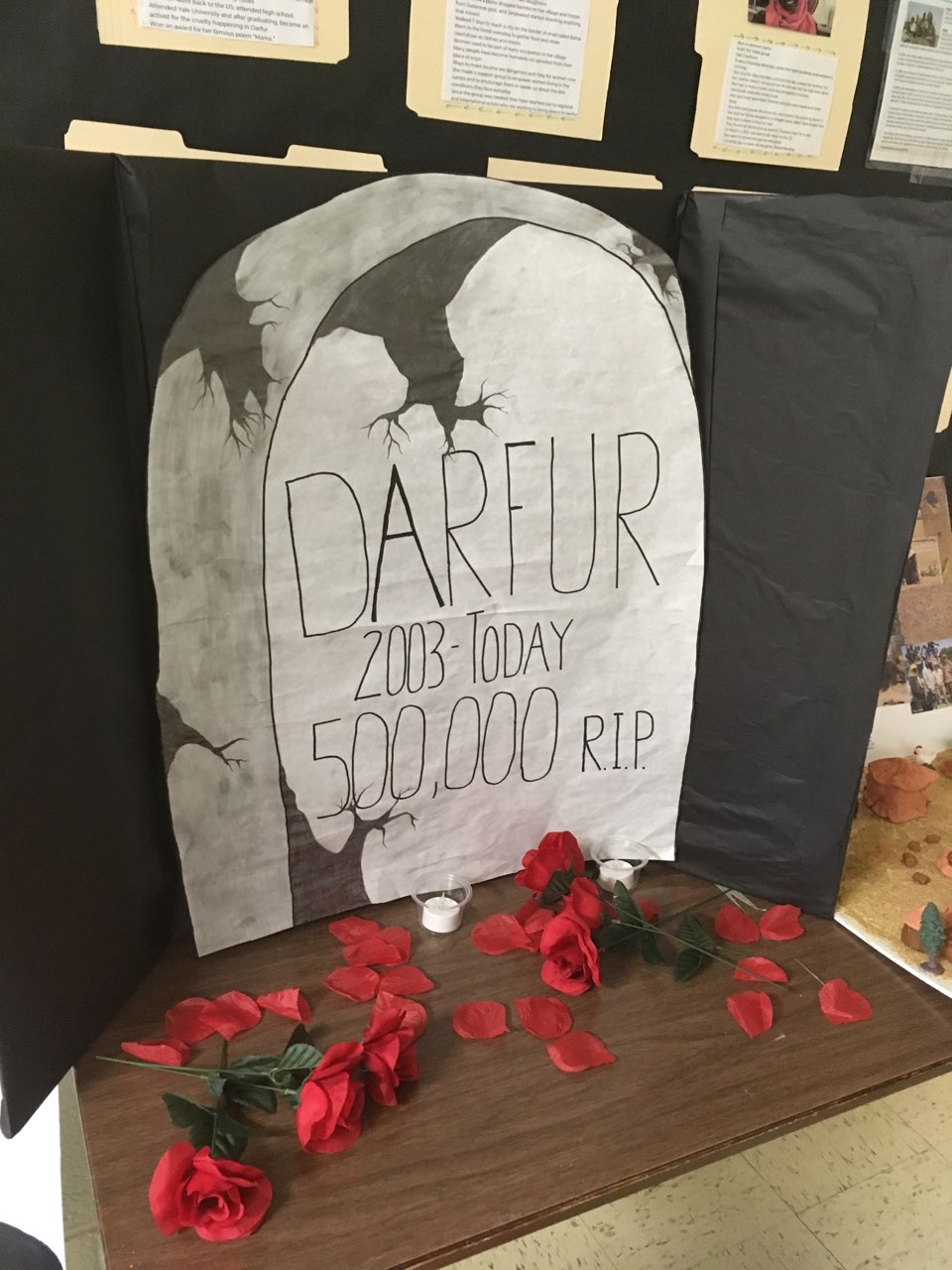 “We did research on Righteous Among the Nations, researched survivors, and they put together this wonderful exhibit that encompasses everything, not just the Holocaust, but to let the message know that it still happens,” said Boszko. “So, Darfur is occurring, and Rwanda happened, and Cambodia happened, so what can we do to kind of stop it from continuing?” Sophomore Hannah Tennbrock said, “It kind of lets you see, you know, never let it happen again. There’s also a room down the hall with all the buttons, and there’s so many, but that’s barely ten percent of the kids that died.”
A parent attending the event, Lynn Tennbrock, said “I think the millions upon millions upon millions of lives lost is horrific and horrifying, and that it still goes on is horrific and horrifying. I think the room where they have the maps and the different stages [of genocides] is eye-opening.”
Boszko explained, “We work first and second semester [on the walk. This year’s presentation focused on the impact of the Holocaust on children. We came up with the ‘Button Up Against Hate,’ where every button represented a child [who died].
Our goal throughout the year was to kind of collect as many buttons as we possibly could, and display them like we did, as button children. When you give a number, 1.5 million or 6 million, you don’t necessarily understand, like what does that look like? But when you have something visual that you can actually show them, it kind of clicks a little bit.”
The buttons were collected through donations, many of which came from the community. While they had aimed to collect 1.5 million buttons, just more than 100,000 were donated. At the event, a poster announced that each button represented about 14 children.
The event also included speeches from survivors, including Maude Dahme, a “hidden child” who was born in Europe in 1936. Her family first fled to Holland to avoid persecution, but as the war continued, she and her younger sister were sent away to live with Christian families through an underground movement designed to protect children. Both she, her sister, and her parents survived.
Dahme currently focuses on Holocaust education, and speaks at schools and other venues about her experiences. “In the last few years, we’ve tried to incorporate more survivors, so students are getting more of a personal aspect into what happened,” said Boszko. “While I’mgreat, it’s a lot better when you have a survivor, or a second-generation survivor that’s in the room, that’s actually speaking. The kids can connect with it more.
Trying to make it more personal and more connected to the kids is how we’ve tried to change it.” Boszko also said that she had taken students to lunch at the Holocaust Council of Greater Metro-West New Jersey, where they ate with second-generation and Holocaust survivors. Present was second-generation survivor Ann Scheingold, who is involved with the organization and whose father had lost his first family in theHolocaust. According to Boszko, as the students were working on the button project, they decided to make a small memorial to the three children. 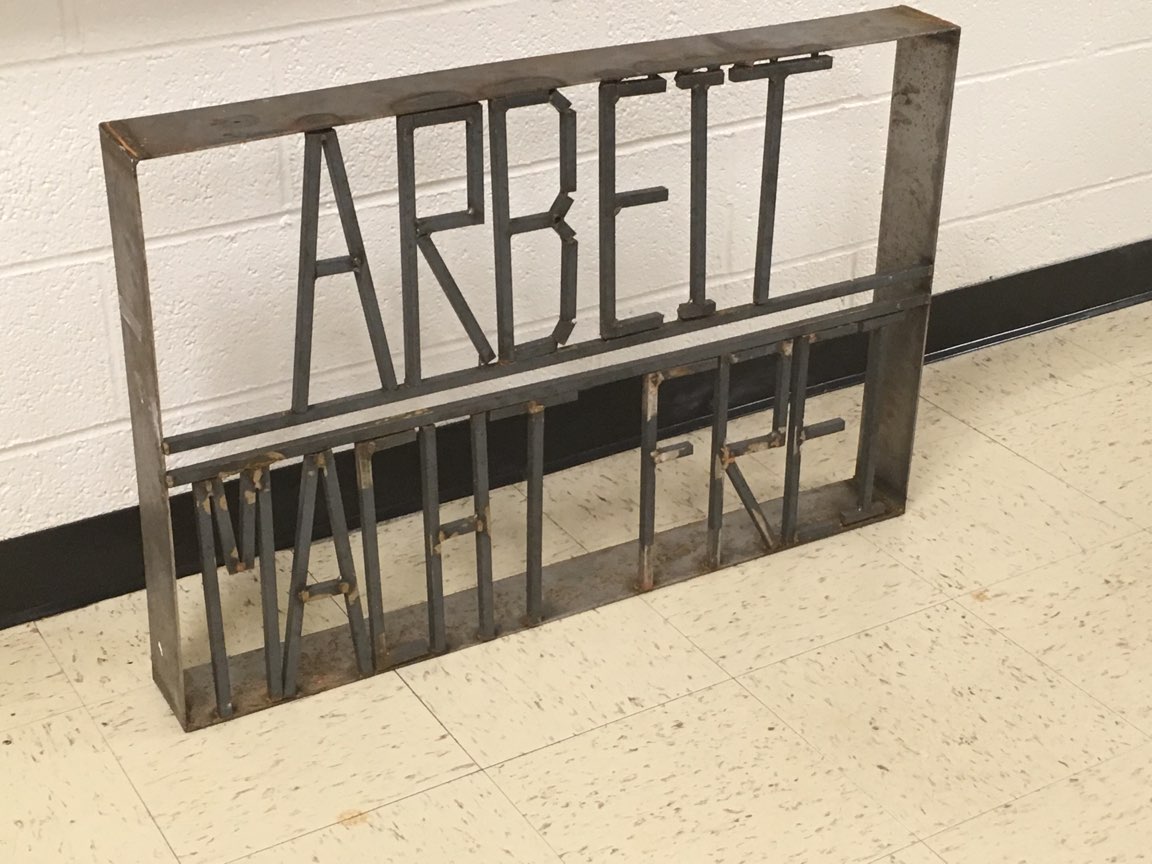 “I met Mrs. Boszko and her students at the Holocaust Council,” said Scheingold, whose parents were both Holocaust survivors. She currently works with survivors. “We have so many interesting survivors, and sadly, they’re dying. They’re getting so old – even the babies are now in their eighties.”
In previous years, the walk has been honored with a National School Board Association (NSBA) Magna Award and the New Jersey Anti-Defamation League’s Aaron A. Flanzbaum 21 st Century Democratic Heritage Award.