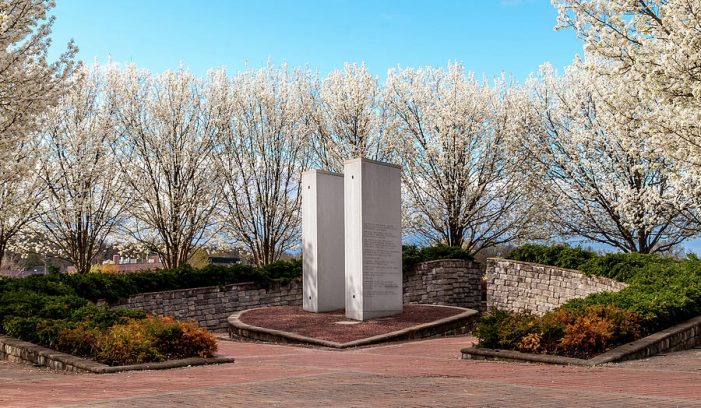 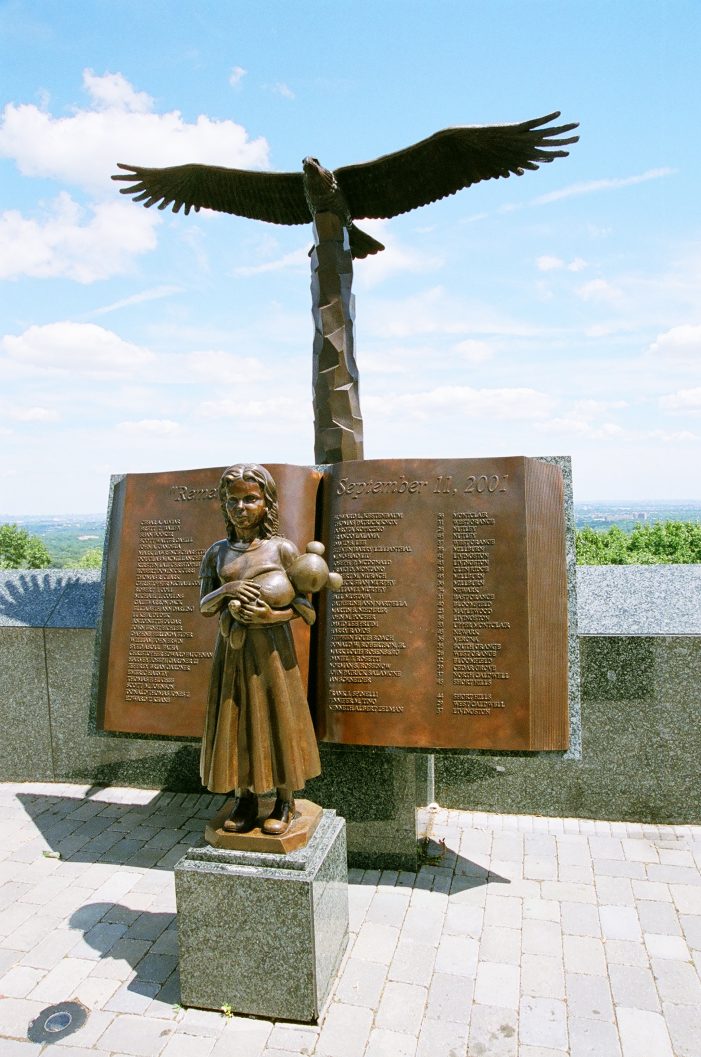 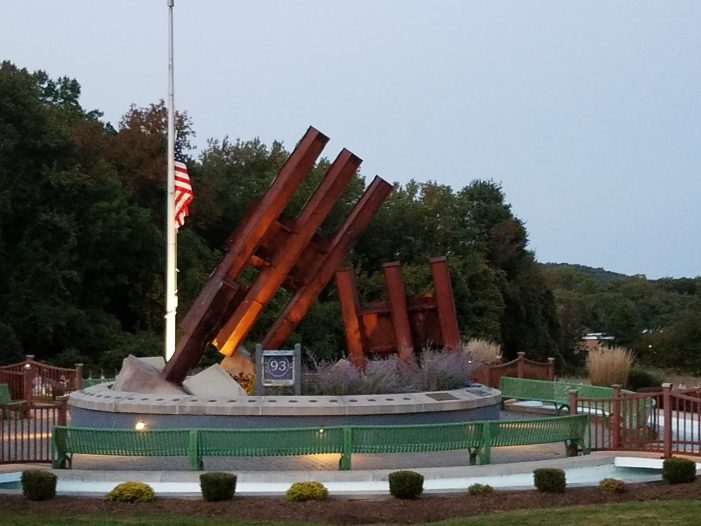 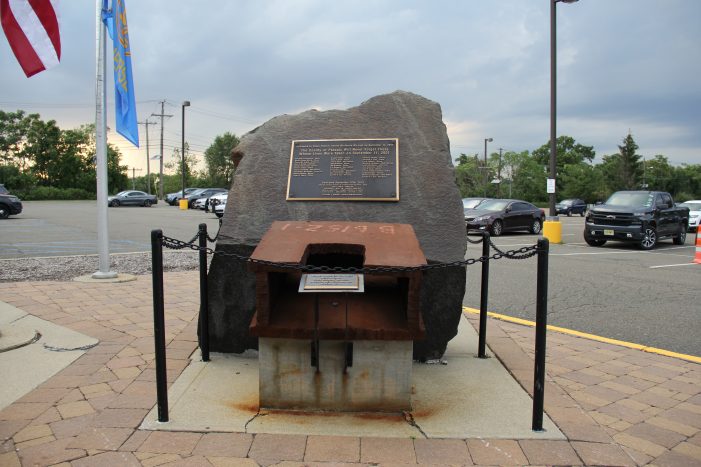 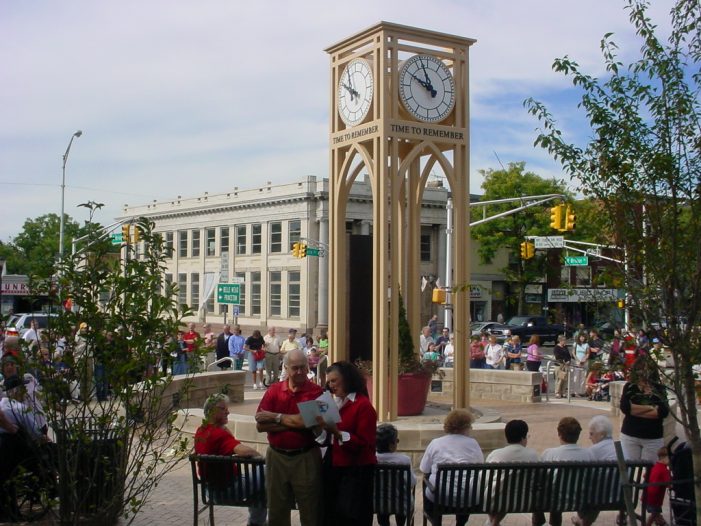 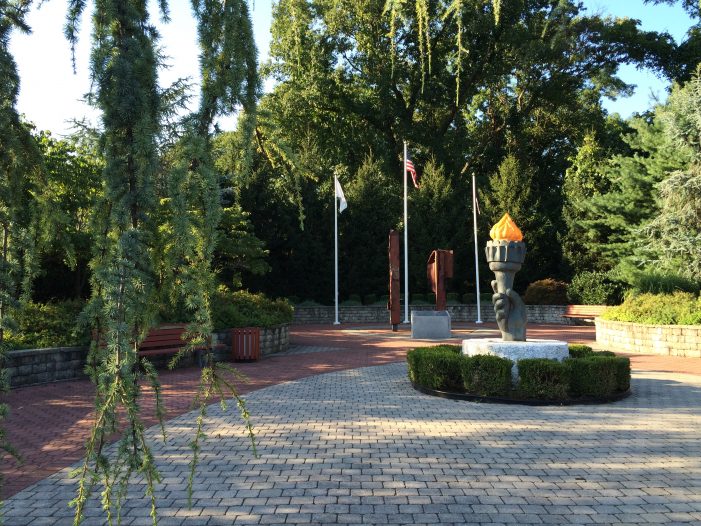 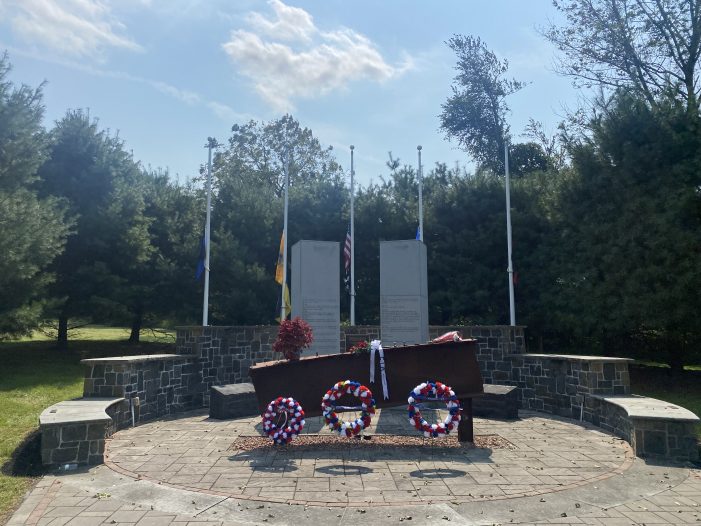 By Steve Sears
My Life Publications remembers and honors those who died in the attacks of September 11, 2001. We reached out to each county in our publishing area for information about their dedicated 9/11 memorials.

147 county residents were among the almost 3,000 who died during the 9/11 attacks.
A 9/11 World Trade Center Memorial is located in the Henry Hoebel Area of Overpeck Park next to Fort Lee Road in Leonia.

Essex County
On Sunday, October 20, 2002, the Essex County September 11th Eagle Rock Memorial was dedicated and unveiled. Added in 2009 was the Flight Crew Memorial, a tribute to the pilots and flight attendants on the four airplanes that crashed that day, and in 2011, a 7,400-pound steel and concrete artifact from the World Trade Center site and a bronze plaque recognizing the heroism of EMS personnel was added. In 2016, the Essex County Search and Rescue Dog Statue was then dedicated at the site to commemorate the role that dogs had in the search and recovery efforts at the World Trade Center and Pentagon after the attacks.
“After the attacks, people spontaneously came to Eagle Rock Reservation to view the tragedy unfold at the Twin Towers and leave cards, letters, photos and flowers in an impromptu memorial in honor of their loved ones,” says Essex County Executive, Joseph DiVincenzo, Jr. “I knew immediately that this was the natural location for a memorial because of the public attraction to this site and the unparalleled view of the World Trade Center from the lookout area. Our September 11th Memorial is a special place for people to come for solace and comfort because of its unique location and its powerful message of peace and hope.” The Essex County September 11th Eagle Rock Memorial is located in Essex County Eagle Rock Reservation off of Eagle Rock Avenue in West Orange.

Morris County
Following the attacks in which 64 people from Morris County perished, a committee was formed which included the family members of people who died, to help locate a site for the memorial, raise funding for its construction, and select a sculptor to design it. The Morris County 9/11 Memorial was constructed on county-owned property in 2003 and dedicated on September 10 of that same year during a candlelight vigil.
The memorial is located at 460 West Hanover Avenue, at Morris County 9/11 Memorial Park.
“Everyone in Morris County came together to site, fund and build our 9/11 memorial after that terrible day in 2001,” says Morris County Commissioner, Douglas Cabana. “Every bit of it symbolizes our grief for those lost, our resolve to continue living as a free nation and stand up to oppression, and our hope that future Americans will find a bright future. To this day, more than 20 years after the attacks, the memorial remains an important part of life here. Every week, Morris County tends to that memorial. We have people cleaning the walkways and the pool, replacing the flowers and wiping down the plaques. It is visited almost daily by residents and visitors from outside our county. We will never forget.”

Passaic County
The 9/11 Memorial is located at the Public Safety Academy at 300 Oldham Road in Wayne.
Dedicated on September 10, 2013, it is comprised of a steel beam from the North Tower, and behind it is a rock with the dedication plaque with the names from the 30 Passaic County residents who died on 9/11. Bringing the beam down to the county and its placement was organized by County Commissioner Bruce James and at the time, the Director of the Police Academy, Bob Lyons. The rock with the plaque was donated by Sam Braen, owner of Braen Stone.
Commissioner Director Bruce James says, “The events of September 11 changed our lives as individuals, and as a nation. In the 20 years since the attack, there is so much to reflect on – the lessons we have learned and where we, as a nation, are headed. The tragic events that unfolded on 9/11 have molded us to find strength and hope in the face of crisis.”

Somerset County
40 people from Somerset County died in the 9/11 attacks on our nation, and on September 11, 2004, the 9/11 Memorial was dedicated in Somerset County. It is located on the courthouse complex lawn in Somerville at the corner of Main and Bridge streets.
County Surrogate Frank Bruno was able to obtain a piece steel from the World Trade Center, which is a permanent part of the memorial. The design, featuring a clock tower which reads, “Time to Remember,” was developed by county staff artist Linda Brady. The concept was converted into architectural drawings produced by The Musial Group of Mountainside. Construction was by Skinner & Cook of Roselle Park, and Michael Mills of Ford, Farewell, Mills & Gatsch in Princeton provided advice on the design’s relationship to the historic nature of the courthouse green, which is on the state and national historic registers.

Union County
Dedicated on Sept. 13, 2003, the Union County September 11 Memorial is located on a hilltop at the border of Mountainside and Springfield in Union County’s Echo Lake Park.
Two girders recovered from the ruins of the World Trade Center are arranged within a five-sided area representing the Pentagon, and an Eternal Flame represents those who died in Pennsylvania along with members of the Armed Services and emergency responders. The names of the 60 deceased Union County residents are etched into the memorial.

Warren County
The Warren County Emergency Services and 9/11 Memorial site was dedicated in 2011, and the monument itself was completed for September 11, 2012 in memory of the four Warren County residents who died on September 11, 2001.
The memorial consists of a large steel girder from the Twin Towers, and two granite towers representing the North and South Towers of the World Trade Center. On either side are black granite memorials with the names of those from law enforcement, and the firefighters and EMS personnel who died in the line of duty. There are four smaller round pillars topped with brass disks, one memorializing Flight 93, one for the Pentagon, one for the World Trade Center, and the fourth for all of the locations that were attacked combined.
The Memorial is located at 1500 State Highway 57 in Washington, on the driveway between the Warren County Technical School and the Warren County Community College, and near the county Public Safety Department and 911 Communications center.
According to Warren County Fire Marshal Joseph Lake, Jr., a memorial committee member, the memorial is a place of peace and rememberance.
“It gives the residents of Warren County, particularly the ones who lost friends and loved ones, a place to go to and remember.”