I Remember Dad: A Summertime Saturday Afternoon, in 1950, at the A&P 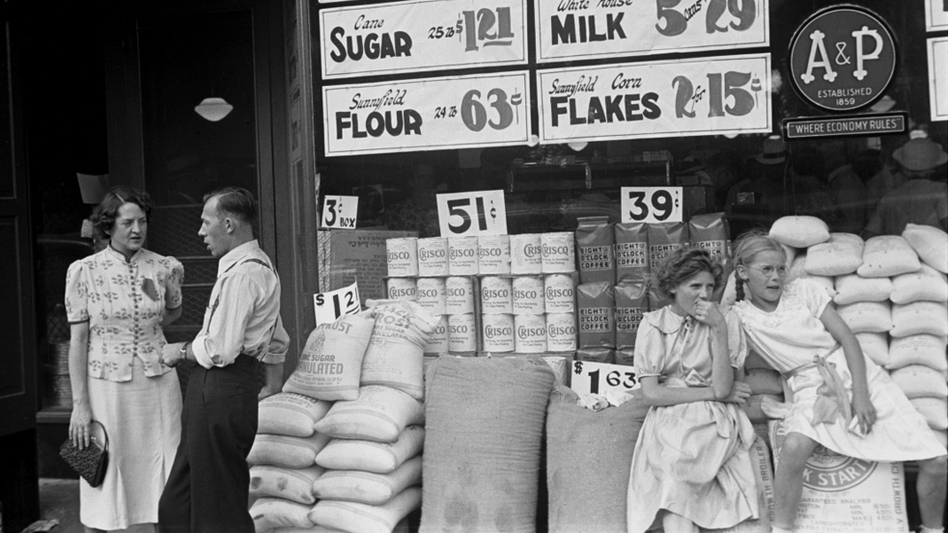 In June of 1950, my Mom began working in the Bakery Department at the A&P Grocery Store in Boonton. Mom was all of 17 years old and had just completed her junior year at Boonton High School. Mom was an apprentice baker. Back then the A&P was noted for its fresh baked bread and pastries. I hold a grand gratitude to whoever was my Mom’s boss and taught Mom how to bake, oh so well. For my Mom baked homemade biscuits and bread, pretty much every day of the week, when I was a boy growing up in Old Lincoln Park.

What is our destiny, our fate? What is that special hidden and secret formula that is known only to the Divine One that brings two people together, when the odds are a million to one? To be at a specific place, at a specific time, to meet that special person. That had either person arrived at that predestined place, even 10 seconds later, the meeting of these two people would have been missed.

My Aunt Eleanor was married to my dad’s brother, Earl. They lived across the street, on the 600 block of Boonton Avenue, from the home that my mom grew up in. Aunt Eleanor was a never-ending matchmaker. It really was her calling in life. And she knew that the youngest Kemmerer girl worked in the Bakery Department at the A&P. And she also knew that her brother-in-law, Richard, spent too much time working at his job as a truck driver and playing with his elaborate train set that ran throughout the length and breadth of the upstairs hallway of his parents’ home at the end of Mabey Lane.

Dad often visited his brother Earl on weekends. The story goes that one Saturday afternoon, Aunt Eleanor told Uncle Earl and Dad to drive down to the A&P and buy a loaf of freshly baked break and a chocolate cake. Uncle Earl often said, at family gatherings, that he had been instructed by his wife to make sure that his shy brother talked to the cute Kemmerer girl in the bakery department, that Saturday afternoon when she sent the two of them down the A&P to buy some baked goods.

According to Mom, Dad and Uncle Earl came over to where she was putting the bread on the shelves. Dad was so shy and awkward that he barely said hello to her. In Mom’s version of the story, if it were not for her charming outgoing personality, my sister and I would have never came into this world.

Now, according to Dad, my father approached Mom and was fully confident and outgoing when he saw Mom putting the freshly baked bread on the shelf. Dad’s story told of his wondrous charm and that he simply swept Mom off her feet with his dashing good lucks and outgoing personality. And that he confidently asked Mom if she wanted to join his brother and sister-in-law for supper that night.

And then there was Uncle Earl’s version of the story that told of a shy boy and a shy girl. That he had to do all the talking and that the two of them barely talked to each other. Uncle Earl said that he bragged to Mom about his brother’s service to his country at Hickam Air Field. And then went on to tell my dad that Mom was an honor student at Boonton High School. And, Uncle Earl always insisted that he was the one who invited Mom and her parents over for supper that night.

Somehow and someway, I think that Uncle Earl’s version of the story was the closest to the truth. Looking back, I never did thank Uncle Earl for being such a catalyst for my mom and dad to get together. Now at 67, it is something that I deeply regret. They’re all in Heaven now. Uncle Earl, Aunt Eleanor, Mom and Dad. And, I so very much miss them.