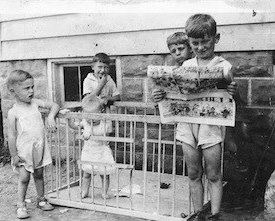 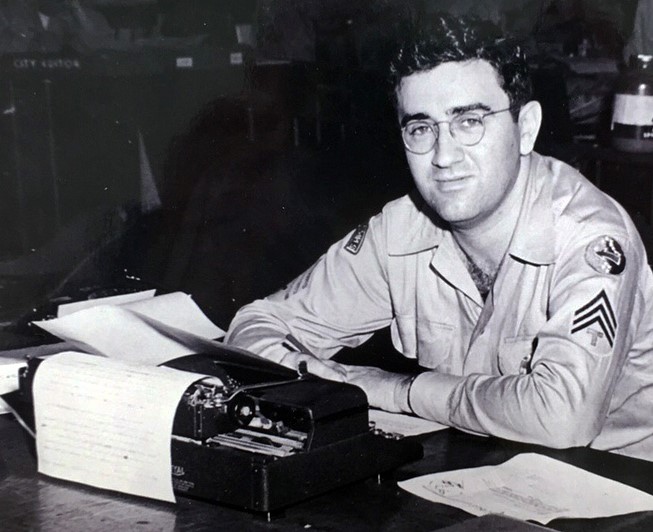 During World War II, while my dad was at Hickam Air Field in Hawaii, he came to know the late great Jerry Siegel. Mr. Siegel, along with Joe Shuster, created one of the all-time greatest comic book superheroes, namely Superman. Jerry Siegel was originally trained to be an airplane engine mechanic at Fort George G. Meade, located near Baltimore, Maryland. When Jerry Siegel was at Hickam, he served principally as a writer for Stars and Stripes and Hickam Highlights newspapers. However, there are hints that Jerry did actually work on airplanes at Hickam Air Field, including the great P-51 Mustang.

As a child, I used to read comic books, sitting on the living room floor of the old Mabey Homestead. Back when comic books were just a dime, and I was in the third grade, I remember dad telling me about how he knew the man who created Superman. Dad often talked about knowing Jerry Siegel, during his stay at Hickam Air Field.

It is important to understand that during World War II, there was a great wave of patriotism and a fierce determination, that burnt deep in the heart of so many U.S. Servicemen, to win the war. Men did not stand on ceremony. The feeling of one for all, and all for one, burnt like a fire consuming a national forest, in the hearts and minds of United States servicemen. There is no doubt in my mind that during World War II, Jerry Seigel rolled up his sleeves and from time to time, worked on the fighter and bomber planes in the hangars of Hickam Air Field.

Jerry Siegel was a Technician Fourth Grade, essentially a Sergeant, during his stay at Hickam Air Field. It was a special rank that was used by the United States Army during World War II. It was the rank of a non-commissioned officer, but held no command authority. My dad stated it perfectly when he used to say, “Jerry Siegel was a regular guy.”

Comic books were a common bond that Dad and I shared. Simply put, we both loved comic books. And, we both agreed, Superman was one of the all-time greatest superheroes. It staggers my imagination that my dad may well have worked with Jerry Siegel to repair a P-51 Mustang engine. My dad often told me that Jerry never acted better than any of the other men. He didn’t walk around Hickam, acting like he was better than everyone else.

In early April of 2006, Dad came home from the hospital and went under Hospice care. Dad had been diagnosed with pancreatic cancer. One day, in the middle of April, Dad asked me to bring him some of my old comic books, that we would read them together. I still had a lot of the Superman comic books from the early 1960’s.

Jerry Siegel wrote a lot of the Superman comic books including Action Comics, Lois Lane, Jimmy Olsen and Adventure Comics, even into the mid 1960’s. But sadly, DC Comics did not always give Jerry credit for his writing talents in the comic book that he wrote. The last Superman based comic book that Jerry wrote for DC Comics was Jimmy Olsen #89 from December of 1965.

My dad went Home to be with the Lord in May of 2006. It was a few weeks after his passing that Mom, my sister Patti, and I went through Dad’s things. There, in an old shoe box were Dad’s artifacts and keepsakes from his stay at Hickam Air Filed. Rolled up in two rubber bands, was an old issue of Hickam Highlights newspaper. And inside the pages of that issue, was a story about dad receiving an award for outstanding morale and enthusiasm in his work as an airplane mechanic. And yes, you guessed it, it was written by the late great Jerry Siegel.

Jerry Siegel touched the lives of both, my dad and I. I never met Jerry Siegel. Something that I deeply regret. I can’t help but to think that it may well be true that Jerry Siegel drew upon his experience at Hickam Air Field in writing comic books. It just makes me wonder.

On the twenty-eighth of January of 1996, Jerry Siegel went Home to be with the Lord. A most sad day in comic book history. For the world lost one of the all-time greatest comic book writers on that day. And, as my dad would often say, a man who was just a regular guy.