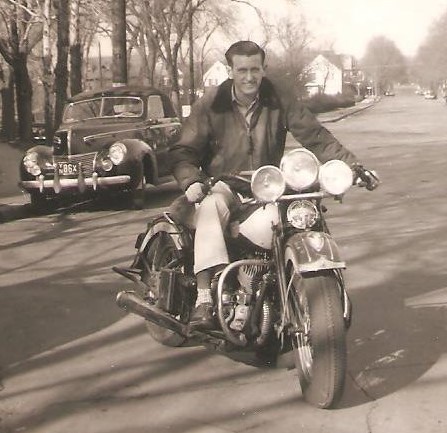 In the Summer of 1946, my dad finally departed from Hickam Air Field in Hawaii. The war was over. He was shortly thereafter granted an honorable discharge. Dad was a very patriotic man and signed up for the Reserves in the Army Air Corps.

Dad returned to his humble home in Lincoln Park at the end of Mabey Lane. He got a job as a truck driver at Moon Carrier, which was based in Paterson. He also moonlighted, nights and weekends as a dispatcher for Moon. It was a most wonderful and glorious time for my father.

Dad was home. He once again became the big brother, at home, to his four younger brothers. He loved to work on his big model train village in his spare time. And, he began dating the woman whom he had corresponded with while he was at Hickam, namely my mom, Janet Kemmerer.

It was a most happy time for my dad. He had a few dollars in his wallet, and he went out and bought a motorcycle. Dad even sported a leather jacket! It’s a funny thing for a man to think of his father, being young and driving a motorcycle about. But that’s just the way it was, Dad loved his motorcycle.

Legend has it that one of my mom’s older brothers had a little talk with Dad. It all boiled down to the fact that Mom’s three older brothers did not appreciate their little sister dating a man who rode a motorcycle. And, had the nerve to come to her house and take Janet on dates on a motorcycle.

My dad told the story to me at least a dozen times, it was the motorcycle or Mom. He chose Mom. Well, Dad had a best friend, Tommy Andrews who lived in Haskell, New Jersey. Dad and Tommy were best pals all through their stay at Hickam Air Field. The story goes that within the week, Dad sold his motorcycle to his good friend, Tommy. Thus, ending Dad’s fun-loving, easy-going era of being a motorcycle man.

Life is so funny at times. I often wonder where I would be, if Dad had chosen his motorcycle over Mom. I’m just glad he did choose Mom over his motorcycle.

The story doesn’t end there. In 1995, we all took a vacation trip to Disney World. We were in the Disney Market and outside one of the stores there was this motorcycle on display. Somehow, it was grounded on cement grades. Well, Dad eyed that motorcycle and immediately climbed onto it. It was as if Dad had magically become 23 years old again. There were few times that I had ever seen my dad that happy. It was as if he was taking that stationary motorcycle out to the open highway and breaking the speed limit.

A crowd gathered. A small crowd, but none-the-less, it was a bit of a crowd of people and they began cheering Dad on. It was such a fun moment.

Then Dad got off the motorcycle and some of the people actually clapped, sharing in Dad’s moment of utter happiness. As we walked away, Dad looked back and took one last look at that stationary motorcycle. For a few moments, he went back in time and became 23 again.

I remember Dad turned his head from that motorcycle and as we walked among the stores, left and right of us. I then saw a bit of sadness in my father’s eyes. A sadness that I shall never forget.