I Remember Dad: Dad’s Love for the Old Morris Canal 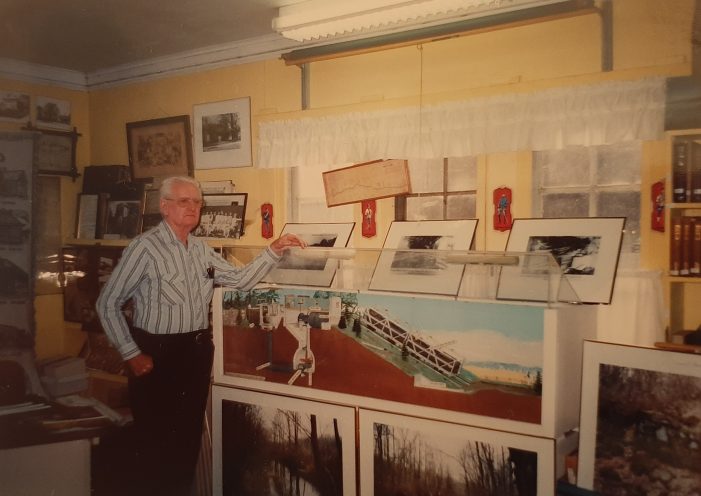 A photo of my Dad standing beside the educational model of a canal incline plane, inside the Lincoln Park Museum. Dad often used this great visual aid in his many talks on the history of the old Morris Canal. 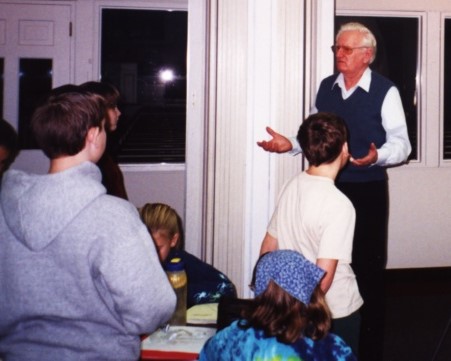 Dad giving a talk about the old Morris Canal to a class of grammar school children. Dad loved to educate children about the colorful history of canal life.

My father had a great love for the history of the old Morris Canal. After all, his father, Watson Mabey, worked as an Engineer on Incline Plane Ten East in Lincoln Park. And, his grandfather, William Mabey, once owned and operated an icehouse along the banks of the canal. The Morris Canal was a page of New Jersey history that was near and dear to his heart.

For over 20 years, my Dad served as the Vice President of the Lincoln Park Historical Society. And, in that time, Dad must have given well over a hundred educational talks on the old Morris Canal. Most of the talks that Dad gave, were at the Lincoln Park Museum. One of Dad’s favorite subjects, for his many talks, was explaining the intricate mechanics of how an incline plane operated.

I loved my Dad’s style of public speaking and how he explained things to a group of people. Dad had a kindness in his voice. His love for the old Morris Canal would shine like a diamond, as he told the stories of the old canal that he remembered his father telling him, when he was a boy.

When Dad gave talks at the Lincoln Park Museum, they would always have cake and coffee afterwards. From town councilmen to mayors to state senators to college professors; so very many people of respected standings would then tell Dad how much they had learned from one of Dad’s talks on the old Morris Canal. My Dad always graciously accepted their kind compliments with a certain graceful humble spirit.

I loved my Dad, so very much. In March of 2006, Dad was diagnosed with pancreatic cancer. He passed away in May of 2006. I still deeply grieve his passing. I am deeply indebted to my father, for educating me so very well on the subject of the Morris Canal.

Each and every one of us has within themselves, a sense of a calling to serve others. I know for my father that one of his many callings to serve others, was to educate people about the splendors and wonders of the old Morris Canal. I’d give an eyetooth, to once again hear and see my Dad give one of his talks on the history of the canal. In memory, from time to time, I return to that quaint and charming little museum and imagine once again that I’m sitting in one of those old metal folding chairs, listening to one of Dad’s talks.