A rare photo of Dad in his U. S. Army fuel truck at Hickam Air Field in Hawaii, during World War II. 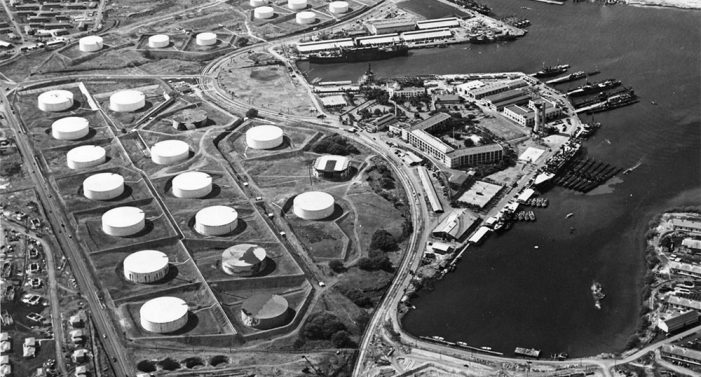 A great aerial photo of the above ground, fuel storage tanks that were just south of Hickam Air Field. Photo was taken in 1940. 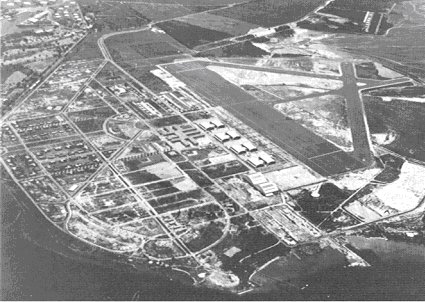 An aerial picture of Hickam Air Field taken in 1940. If you look closely, you can see the above ground fuel tanks in the upper left hand corner of his photograph.

After successfully finishing basic training at Fort McClellan in Alabama, Dad was given leave for one week. He was then shipped to Hickam Air Field, to serve as part of the infamous Seventh Army Air Corps. Dad came up the hard way. He did not start out working on fighter planes, like the tough and rugged P-51 Mustang. Instead he drove a fuel truck and fueled fighter and bomber planes. The specific model truck that Dad drove was a GMC, CCKW-353, informally known as a “Jimmy.” 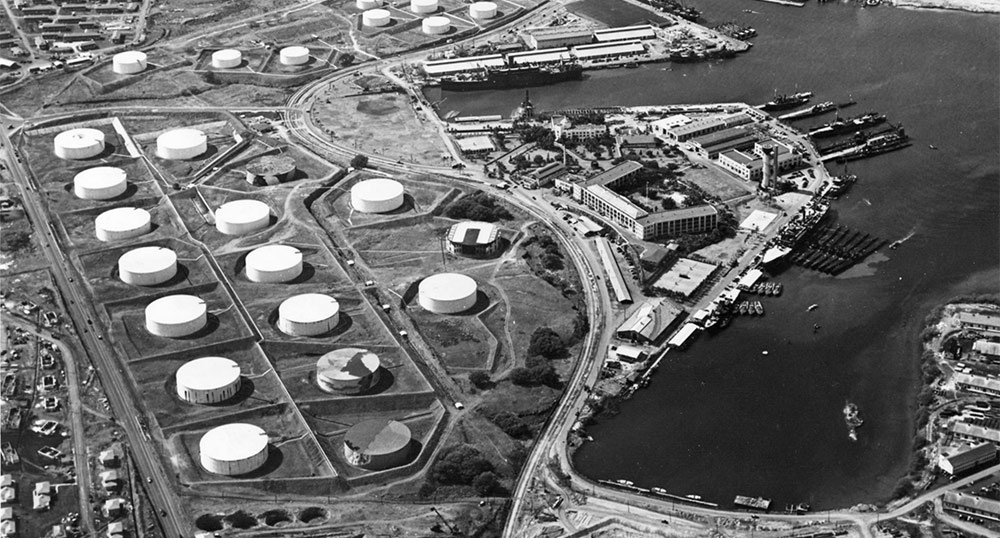 Fuel storage at Hickam Air Field was very unique. To begin with, during the latter part of World War II, the fuel was stored underground. Construction for the underground fuel storage tanks began in December of 1940 and continued until final completion in 1943.

I remember my dad telling me about this elaborate system of fuel storage that was at Hickam Air Field. Regretfully, I didn’t listen close enough. I didn’t ask enough questions. Now, at 66, I deeply regret that I didn’t take notes of all that my dad told me about these elaborate underground fuel storage systems at Hickam.

Apparently, it was all a very Buck Rogers and Star Trek, sophisticated system. Each fuel tank was lined with steel and encased in concrete. The underground fuel storage capacity at Hickam Air Field, during World War II, was a maximum of 250 million gallons. These steel lined, concrete vaults are hidden deep beneath a mountain range, east of Hickam Air Field.

On December seventh of 1941, the morning of the Japanese air attack on Pearl Harbor and Hickam Air Field, the fuel was still stored in above-ground storage tanks. Fortunately, the Japanese did not bomb these fuel tanks. They contained a combined amount of 4.5 million gallons of fuel. The loss of life and devastation would have been much greater than it had been, on that terrible morning of the seventh of December, if the Japanese had bombed the fuel tanks. The fuel tanks were just south of Hickam Air Field. It was shortly after the Japanese attack that fuel, for the fighter and bomber planes, began being stored underground.

My dad and I were both great fans of the original Twilight Zone television show. My dad often told me that Rod Serling could have easily made a Twilight Zone episode about Hickam Air Field. There was a great deal of secrecy. And, just the engineering of the entire fuel feeding system, flowing from the underground storage tanks to being poured into a “Jimmy” fuel truck was an engineering marvel that was way ahead of its time.

The whole process, of providing fuel for the fighter and bomber planes at Hickam, was on a “need to know basis.” There were secret codes, passwords that were changed on a regular basis, and a very intense security system. All of it was like something out of a James Bond movie. Dad once told me that he was even forbidden to write down any of the secret codes or passwords that were involved in the fueling process at Hickam. All the secret codes and passwords had to be committed to memory, never to be written down.

My father often told me that there was a brotherhood at Hickam that surpassed rank, that dissolved political and religious differences, and really and truly overflowed with a spirit of one for all and all for one. That overwhelming feeling stemmed from the truth that the men of Hickam Air Field were all Americans determined to win the war!