I Remember Dad: So Dear to Thy Heart 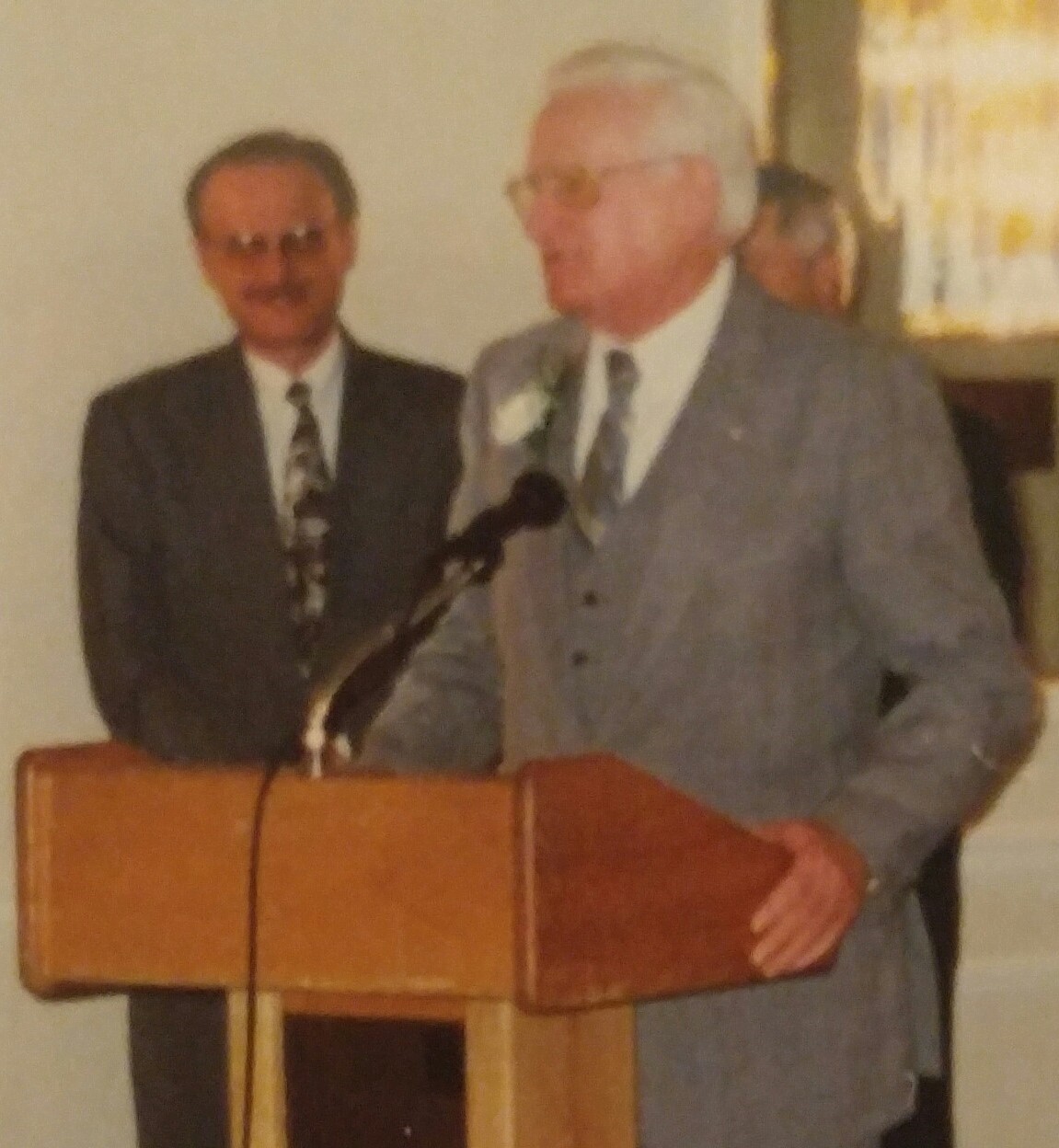 Over the course of time, my dad must have given several dozen talks to different civic groups, nonprofit organizations, and children’s classrooms. Mostly on the subject of the history of Lincoln Park and of course, his childhood remembrances of the old Morris Canal. Sadly, I missed seeing and hearing all so many of Dad’s talks, since they were given during the afternoon and I would be at work.

But there was one particular talk that Dad gave, that remains near and dear to my heart. In December of 1992, I was very honored to have been elected as President of the Morristown AT&T Toastmasters Club. My term of office was from January to December of 1993. It was a tradition, in our Toastmasters Club, to hold an all-day Saturday seminar in early June at one of the swanky hotels in Morristown.

The theme of the all-day seminar that year was “Historical Perspectives.” Members were encouraged to give talks on the subject of history. Either their own personal history, the history of their hometown, American history, or an historical event of some degree of importance. It’s funny, when the members all voted on the theme, I thought of my dad right away.

I was very nervous to ask my dad to speak at the seminar. I don’t know what it was. Respectfully, a lot of the members were a bit pretentious. They were nice people, but many of them carried an air of overwhelming self importance. Some, I stress SOME, were downright snobs.

I didn’t know how Dad’s downhome, easy going, Mayberry style would be accepted by some of the more pretentious types in the club. If you had ever attended one of my dad’s talks, you know that when Dad gave a talk, you could close your eyes and imagine that it was Andy Griffith telling one of his homespun stories.

Well, I did ask Dad to give a talk about the history of Lincoln Park at the big all-day seminar. And, to say that Dad was the toast of the day is an understatement. Dad held their hearts in the palm of his hand with his easy going, downhome, country style. Some of the top big shots, from the company, loved Dad’s talk.

After Dad’s talk, we took a lunch break. My father was surrounded by his new-found fans. In short, the people simply loved Dad’s folksy, Mayberry style. A lot of them asked Dad questions about Old Lincoln Park and the Morris Canal, which Dad interlaced in his talk that day.

How many people get to see and hear their dad give a talk in front of the movers and shakers of the company that they work for? I would say, very few. I so dearly cherish that memory.

These are tough times. Our nation is so very politically divided. There is something in the air, an unspoken tension of sorts. Maybe there is an important place for folksy, downhome remembrances of a simpler time, a kinder time.

I could see my dad talking to a joint meeting of Congress. Maybe his themes of good will, do a good turn daily, love one another, and “he ain’t heavy, he’s my brother” would help to melt away a lot of the disdain, tension and enmity that seems to abound in Congress today. Maybe Dad’s simple, downhome style could knock some walls down. Sadly, we’ll never know.

Richard Mabey Jr. is a freelance writer. He can be reached at richardmabeyjr@hotmail.com. Please put on the subject line: My Life Publications. .