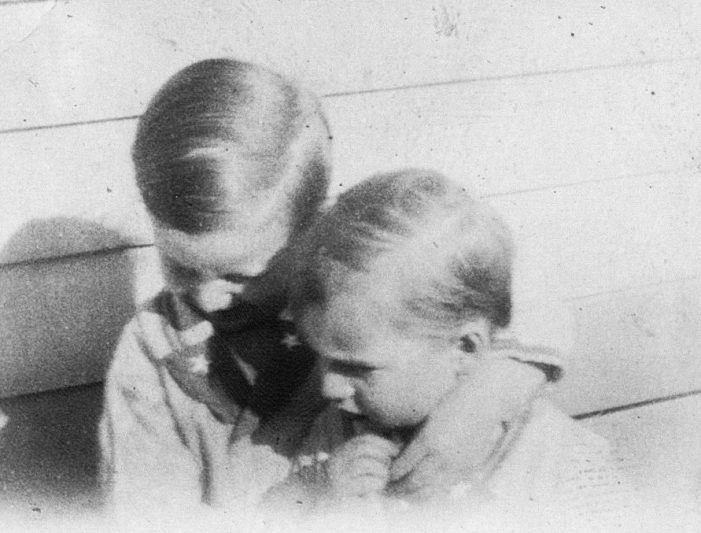 This picture of Dad (left) and Uncle Carl (right) shows the birth root of the spiritual tie between the two brothers, that existed all of their lives. 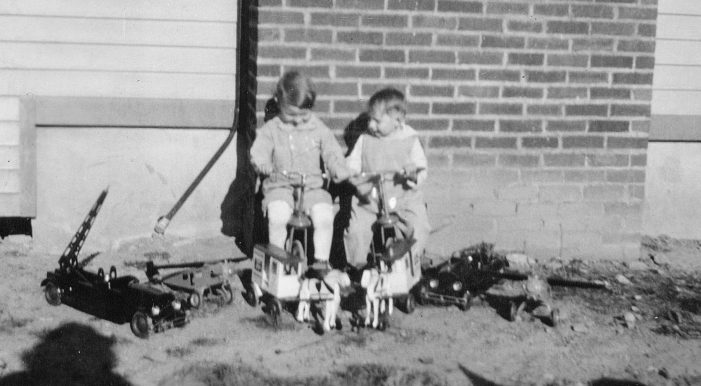 Dad (left) and Uncle Carl (right) on their bicycles, in front of the big chimney of the home that my grandfather built at the end of Mabey Lane. 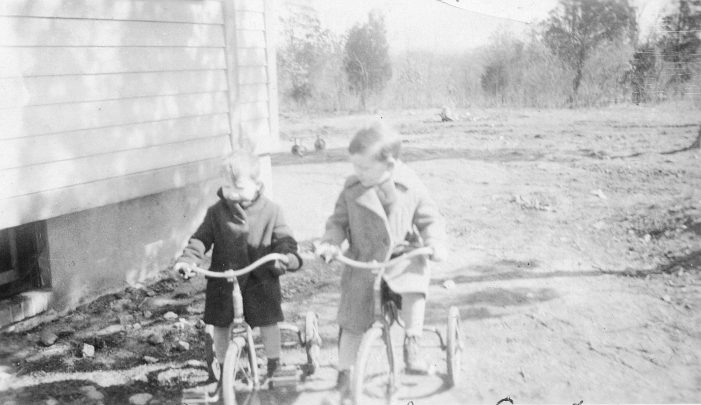 Uncle Carl (left) and Dad (right) on their tricycles, in the side yard of their childhood home.        This picture beautifully shows how the end of Mabey Lane was once surrounded by forest.

Of all my dad’s seven brothers, I believe that it was Carl to whom he had a most uncanny spiritual connection with. Uncle Carl was just one year younger than Dad. They shared a very special bond all of their lives. When Uncle Carl was 10 and Dad was 11, Uncle Carl nearly died from an attack of acute appendicitis. Back in those days, in old Lincoln Park, there were not a lot of hospitals close by. As a matter of fact, there weren’t a lot of doctors around in the area.

Most fortunately, Uncle Carl was operated on and had his appendix taken out. But it was something that, from time to time, Dad and Uncle Carl talked about. Dad used to say to Uncle Carl, “I don’t ever remember seeing Mom pray so hard, as when she was praying for you to survive that operation.”

Dad often told me that when he was at Hickam Air Field, during World War II, that he missed all of his seven brothers and his sister, Violet; but that he missed his brother Carl the most. Whatever it was, it was an unmistakable bond.

I remember one time, my grandmother told me that Uncle Carl woke her up at about ten o’clock at night, crying that his brother Dick had just got hurt really bad. Hawaii is six hours earlier than the time on the eastern seaboard of the U.S. So, it would have been about four o’clock in the afternoon, at Hickam Air Field. Grandma told me that about a week later, she got a letter from my dad telling her that he had fallen off the wing of a P-51 Mustang Fighter Plane and had hurt his shoulder.

The two brothers grew up in the home that my grandfather built at the end of Mabey Lane. At that time, Mabey Lane was surrounded by woods to the north, to the west and to the east. And, to the north lied a great big open field that separated my grandparents’ home from my great grandparents’ home. So, Dad and Uncle Carl, relied on each other from a very early age for friendship and moral support. Dad was the big brother, who always looked out for Uncle Carl, even though Dad was only a year older than his brother Carl.

There were countless other examples of how Dad and Uncle Carl had a very special spiritual tie. One Christmas, they both bought each other ties that had an uncanny similar color and pattern. I remember one Saturday afternoon, when I was in high school, Dad said to Mom, “I think I better give my brother Carl, a call.” And, when Dad called Uncle Carl, he found out that Uncle Carl had just gotten laid off from his job and was feeling very, very sad.

Dad was an incredibly patriotic man. He loved America. He was proud to his serve his country during World War II in the Seventh Army Air Corps. But, I think that deep down, Dad was very homesick a lot of the time, during his stay at Hickam Air Field.

Sometimes, when we get lost in an old black and white movie about the heroism of the men who fought in the Second World War, we walk away thinking that the one and only mark of heroism came from the fighting on the front lines. And, yes, that was true heroism.

But, the men who served our nation in times of war, also fought a different kind of enemy. They stood tall and proud and fought the sad, empty feeling of being homesick. Of missing their mom and dad. Of missing the pretty girl who sat upon the rock wall, of her front yard, while reading a book. They yearned to return safe and unharmed to the towns and cities from which they had come from. And, they earnestly prayed for peace to befall our planet, once again. For truly, they were all super heroes!