I Remember Dad: The Precious Gift 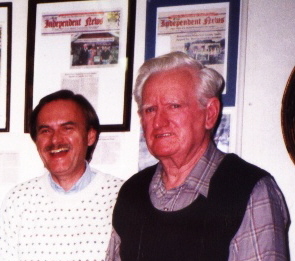 The Summer of 1999 was a most stressful and difficult time for me. I had left the big telecommunications company that I had worked at, as a writer in their Public Relations Department, for over 12 years. I was now working as a proofreader, occasionally actually writing ad copy, for a large ad agency. The work was fast paced and very demanding. I had wondered, deep in my heart, if I had done the right thing by leaving the phone company.

It was during that summer that I continued to work hard as a member of the Beavertown (Lincoln Park) Historical Society. Dad and I were both devoted members. Over the years, I had written well over 50 articles on the history of Lincoln Park for local newspapers. Copies of these newspaper articles were all cut out from the papers and filed in the four-tier filing cabinet, in the Lincoln Park Museum.

The membership meetings for the Beavertown Historical Society were always held on the first Tuesday of the month. I would drive Dad down to the museum, after supper, and we would participate in the monthly meetings. It was in July of 1999, that I was to come to know a sense of appreciation from my fellow members that gave me a most incredible heart-warming boost.

As I opened the door to the museum for my father, there was this still hush that haunted the inner walls of the museum. There was only the 25-watt bulb, at the desk of the museum lit. All was quiet. So, when I turned on the main light switch to the four fluorescent ceiling lights, I was in for a big surprise.

There, standing to my left-hand side, were George Shanoian and Art Smith as they shouted “surprise” to me. It was truly a heart-warming Mayberry moment. To my surprise, one whole section, on the left-hand side of the front wall of the museum was devoted to my published writings. It so deeply touched my heart.

Some of the articles were framed, others were covered in heavy-duty plastic. They were all carefully hung up on the one wall of the Lincoln Park Museum. Just to complete the Mayberry feeling of the moment, atop the little card table sat the coffee pot with a box of donuts. It was a true celebration.

I thanked my dad, George and Art for setting up the wall, devoted to my published historical articles. It was genuinely a cherished moment.

I do not think that my dad, George and Art, truly realized the emotional boost that they gave to me that night. The environment of the ad agency was worlds apart from that of the phone company. The work pace of the ad agency was fast and furious. There was almost a mean-spirited quality to the forceful drive of the executive managers. So, for a few minutes, I had the chance to be the celebrated, local, historical author. Something that to this very day, I dearly cherish.

I did stay at the ad agency for a while longer. But I found a friendlier and gentler place in accepting an editor’s job at a Christian book publisher. I think that the gift of encouragement that my dad, Art and George gave me that night, played a big role in giving me the confidence to move on to greener pastures.