I Remember Dad: The Seesaw 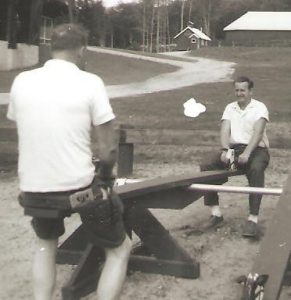 Mr. Thomas Crooks Sr. served as a dedicated Assistant Scoutmaster of Boy Scout Troop 170 from early Spring of 1967 through the Fall of 1971. He was a good man, a fine scout leader, and held a great love of camping and hiking. His son, Tom Jr., shared his father’s love for the great outdoors and was in scouting for the entire time that his father had served as a scout leader.

In May of 1967, I was just completing the eighth grade at dear old Chapel Hill School. I was a Star Scout and was just two or three merit badges away from becoming a Life Scout. The month of May marked the time of the grand and glorious District Spring Camporee. Scout troops from several towns in the Lincoln Park area would camp out together and compete in various scouting skill events.

Friday evenings, of the big District Camporees, was the time when the many area scout troops would set up their campsites. Most of the camporees were held in big open fields, that were once abundant in northeast New Jersey.

There was something called the 15-minute rule. Scout troops would be allowed to bring one vehicle, generally being a pick-up truck, nearby to their allocated campsite to unload the scout tents, cooking gear, and scouting equipment.

I remember that Mr. Crooks had volunteered his big pick-up truck to carry all the troop’s tents and cooking gear from Lincoln Park to the open field. I am not 100 percent sure, but I think that the Spring Camporee of 1967 was held at Stokes State Forest. At any rate, Mr. Crooks drove his pick-up truck to the area that was designated to be the campsite for Boy Scout Troop 170.

A scout leader, from the Camping Committee, would give the vehicle driver a piece of oaktag paper, upon which was written the troop’s site number and the time which they arrived at that particular campsite. Well, what happened was that we ended up taking more than 15 minutes to unload Mr. Crooks’ pick-up truck.

There was one Scout Commissioner who had a reputation of being quite a bit, rough around the edges. He was by no means a kind man. In fact, he was rather harsh and quite a bit of a bully. Well, this particular Scouting Commissioner was going around checking the oaktags that were held in place by the windshield wiper of the front windshield of all the many vehicles being unloaded that night.

As fate would have it, Boy Scout Troop 170 was now a good 15 minutes over the allotted 15-minute time granted to unload the vehicle. With the roar of a lion, the Scouting Commissioner shouted out, “who owns this pickup truck?” I remember Mr. Crooks walking over to the Scout Commissioner to tell him that he owned the truck in question.

What followed was not pretty at all. The Scouting Commissioner read the riot act to Mr. Crooks, about his truck being parked over the 15-minute time limit. The SC, as they were also known as, made Gomer Pyle’s Sergeant Carter look like a choir boy. Well, needless to say that we double timed it and unloaded the rest of the tents and cooking gear that abounded in the back of Mr. Crooks’ truck.

The following morning, while all the scouts were busy cooking their breakfast, I remember seeing Dad and Mr. Crooks standing to the one side of the campsite, apart from everyone else. The next thing I knew, Dad called me over and asked me to join him and Mr. Crooks to take a little walk. As we walked, Dad asked me to tell Mr. Crooks what scouting meant to me. And, of course, I did.

The crux of the matter is that Mr. Crooks had just told Dad that he was going to leave scouting and encourage his son to do the same. Mr. Crooks felt that scouting was hypocritical. That the SC was out of line, the night before. Amazingly, Dad agreed with Mr. Crooks that the Scouting Commissioner was completely out of line.

What happened next, still amazes me at the immense gift of wisdom that flowed through the veins of my beloved father. There was a little playground there. Dad asked Mr. Crooks to join him on the seesaw. And, there right before my eyes, I saw two grown men hop aboard opposite sides of a seesaw.

It was such a rare moment in time, that I took a picture of the now infamous and legendary seesaw moment. I had one of those Kodak Instamatic cameras that were small enough to keep in your pocket at all times.

I used to keep a copy of that picture in my top drawer, back when I worked in the Public Relations Department of AT&T. Whenever my boss would get rude and unruly, I would return to my desk and look at that picture. It would put everything in perspective for me.

Now at 68, I so appreciate my beloved father’s wisdom. For my father was an incredibly wise man. He used a simple seesaw to save a dedicated scout leader from leaving the scouting movement.

Mr. Crooks went Home to be with the Lord, just a few years ago. I often think of this most wonderful scout leader. To my amazement, Mr. Crooks and his son, Tom Jr., came to see my play “Beyond the North Star.” I was so very grateful that they thought enough of me to come to see my play. Sadly, it would be one of the last times that I would ever see Mr. Crooks.

Hold dear to your principles. Don’t let the bullies get you down. Hold your head up high, even in the midst of strife. Stay true to your heart. Forgive the bully. But never let the bully get the best of you.