I Remember Dad: Words Once Spoken to the Tenderfoot Scouts of Boy Scout Troop 170 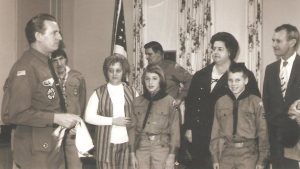 My dad served as Scoutmaster for Boy Scout Troop 170 for 28 years. In all that time, Dad only presented scouts with two ranks, that of Tenderfoot and Eagle Scout. Dad had a trademark expression that he would say to a new scout when he would present the new scout with the rank of Tenderfoot. Dad would always say, “I hope I’ll be pinning Eagle Scout on your uniform in a few years.”

Sadly, very few scouts earn the coveted rank of Eagle Scout. Six percent of Tenderfoot Scouts will earn scouting’s highest rank. It is by no means easy. The path from Life Scout to Eagle Scout is purposely set up to be a rocky, mountainous, rough, and rugged trail. I so deeply regret that I do not have a videotape of Dad at a Boy Scout Court of Honor, telling a new Tenderfoot that some day he hoped to pin the Eagle Scout medal on his uniform. When Dad would say those words to a new scout, the sincerity would ring as clear as the chiming of the Liberty Bell.

My father loved the ideals and principles of scouting. He deeply believed in the goodness of scouting. He held true to the words of the Scout Law and the Scout Oath. Dad really did his absolute best to live up to the Scout Slogan, “do a good turn daily.”

I don’t think that people truly realized how dear scouting was to my father’s heart, mind, and soul. In Dad’s last month of his life, suffering with pancreatic cancer, in very small handwriting, Dad wrote a long, long list of names on both sides of a single sheet of notebook paper. Through the course of the day, as he lied in his hospital bed at home, Dad would unfold the sheet of notebook paper and pray of every person he had listed on that piece of paper.

Dad would often clench that sheet of notebook paper in his right hand, as he drifted off to sleep in the afternoon. Dad went Home to be with the Lord, in the early morning of the twelfth of May of 2006. That very afternoon, with tear-filled eyes, I got the chance to read all the names that Dad wrote down on that single sheet of notebook paper.

There were well over 500 names on that piece of paper. In tiny handwriting, Dad had written names down on both sides of the paper. I am positive that every single scout and scout leader, who was ever a member of Boy Scout Troop 170, was on that long list. Some of the names were scouts whom I had grown up with.

If you were ever a scout or a scout leader of Boy Scout Troop 170, please know that my beloved father prayed for you, more than six times a day in the last month of his life. Dad thought the world of his scouts and his fellow scout leaders. Even now, with it being over 15 since my dear father went Home to be with the Lord, tears fill my eyes as I write this particular chapter of “I Remember Dad.”

Never underestimate the goodness of prayer. Never limit the positive power of brotherly and sisterly love. Hold dear in heart, all that is good and righteous. Simply, love one another. For life is short.