Israel in Egypt at Resurrection Church 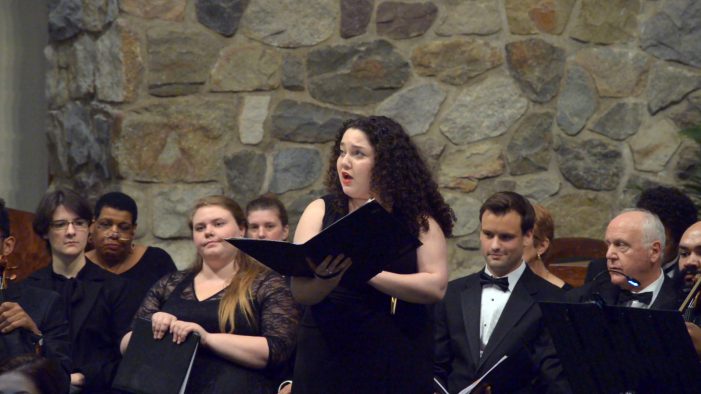 Soprano  Alessandra Altieri during one of her arias. (Rick Tracy) 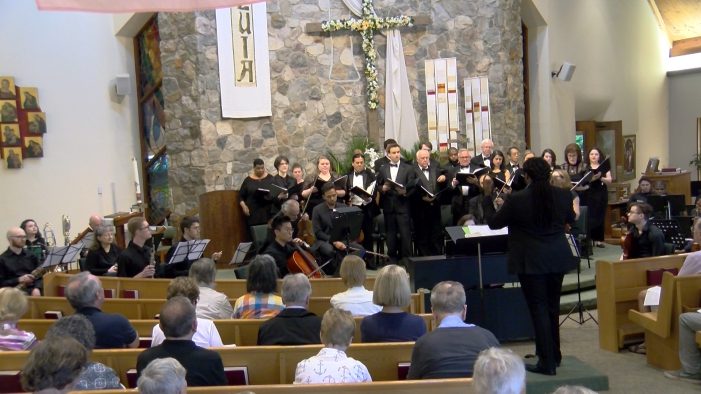 Handel’s Biblical Oratorio “From Slavery to Freedom” showcases selected passages from Hebrew Scriptures mainly from Exodus and The Psalms, directed by Joshua Coyne, the founder of the Randolph Choral Society, and it is dedicated to the memory of Father Ken Hewett.

Father Ken Hewitt was a parochial vicar and full-time teacher for over 20 years at St. Mary Church and School in Dover/Wharton beginning in 1980.

He worked with five successive principles and he estimated that he taught religion to about 2,000 students in the six, seventh and eighth grade during this time.

While teaching scripture, comparative religions along with the teachings of the Second Vatican Council, Father Ken emphasized that respect, charity, and service to others was a common thread of all the great faiths. With the alarming rise of divisions, prejudice, Xenophobia, racism, and the increase of anti-Semitism it was felt that through music, namely Israel in Egypt, we would be reminded of our Hebrew roots and the one God who created and loved all people. This is what Father Ken lived and taught and his memory is honored with this performance.

Presented in two parts, an Oratorio is a large-scale dramatic unfolding of the Old Testament Bible, a musical work for orchestra, solo voices, and chorus and typically a narrative on a religious theme.

Resurrection Parish was one of the first built “churches in the round” and as a result, the circular sanctuary  creates an almost “surround sound” atmosphere allowing the performance of the professionals (19 voices, many of whom have national reputations, and 20 instruments), to deliver a performance that matches the great baroque oratorio’s epic scale.

The Israelites mourn the death of Joseph, an Israelite and favored adviser to the Pharaoh, King of Egypt.

“Now there is a new king over Egypt, which knew not Joseph; and he set over Israel taskmasters to afflict them with burdens, and they made them serve with vigor.” Exodus 18, 11, 13

The new Pharaoh came to the throne with a hardened heart and enslaves the Israelites in Egypt.

God chose Moses to lead his people out of slavery. “I will take you as my own people and I will be your God and you will know that I, the Lord, am your God who has freed you from the bondage of the Egyptians … All Egyptians will know that I am the Lord, when I stretch out my hand against Egypt and bring the Israelites out of their midst.” Ex 6: 5-7

A series of plagues and pestilence come upon Egypt.

“He spake the word and a plague of frogs affected the land; the livestock got a sickness and died;(but not those of the Israelites) blotches and blisters broke out on the skin of cattle.”

“He spake the word, and there came all manner of flies and lice in all their quarters. He spake the word and locusts came without number and devoured the fruits of the ground.” Psalm 105:31, 34, 35

Then, a physical darkness descended on the land; and, finally, the tenth plague; “He smote the first born of Egypt, the chief of all their strength.” Psalm 105: 36, 37

But among all the Israelites, human beings and animals alike, no harm came too them because; “The Lord distinguishes between Egypt and Israel.”

After the last of the plagues the Pharaoh’s army chased the Israelites to the shores of the Red Sea. God commanded Moses to part the Red Sea to allow the Israelites to pass safely to the opposite shore. “He rebuked the Red Sea, and it was dried up. He led them through the deep as though a wilderness.” Psalm 106:9

When the Egyptians try to cross, the waters overwhelmed them, and they were drowned.

The Oratorio concludes with a soprano solo and chorus declaring that “the Lord shall reign forever and ever” and “the horse and his rider hath he thrown into the sea’. Exodus 15: 18, 21,

This interfaith gathering will provide all “free will offerings” to benefit the Faith Kitchen, of Trinity Lutheran Church, Dover.