IT HAPPENED IN OUR TOWN: Denville and the Polio Vaccine Debacle of 1956 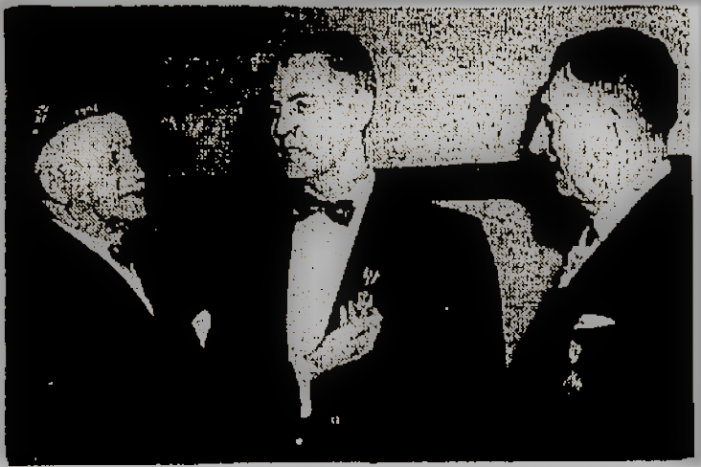 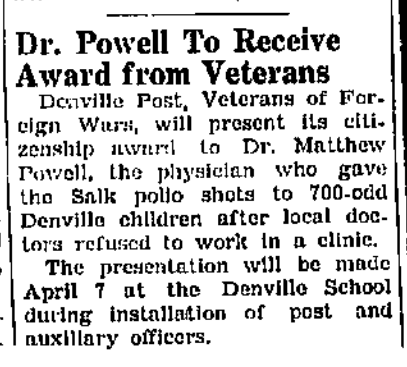 Apart from the more deadly Spanish Flu, Poliomyelitis (Polio) was considered the scariest disease of the first part of the twentieth century. It was highly contagious and once an outbreak started it seemed nearly impossible to stop it. The disease popularized by President Franklin D. Roosevelt (FDR) was quick to strike children through attacking their central nervous systems, resulting in muscle deterioration, paralysis, and sometimes death. It was nothing short of a miracle when in 1955 inventor Jonas Salk, after years of research and trials found a safe and effective vaccine. The only thing left to do was to distribute it to the millions of children across the nation and the world. That would be easier said and done.

Jonas Salk caused quite a stir in the medical community when he announced that the vaccine would not be patented. In his belief, supported by the Federal and State governments, no person should own or privately profit off a vaccine designed to save an entire population and its posterity.  In the end, it was the government’s bad rollout and unclear direction regarding the immunization which left the nation in a state of confusion and without a unified message. Add the tense political climate of the Cold War with its hatred of communism to the mix, and the situation was ripe for disaster. After initially mismanaging the delivery of the inoculations to the people, the national government finally allowed each state to direct their own efforts. By then it was too late. As each state sent its own allotment of the vaccine to each township, the Salk Polio Vaccine had already become a political and bureaucratic issue.

“What will Denville do with 1,200 doses of polio vaccine given by the state is still a question,” proclaimed a January 19, 1956 article from the Denville Herald. As the inoculations sat in the refrigerator belonging to the township engineer and the school nurse Mr. and Mrs. Robert Jenkins, the town debated. The board of health and its health officer were in quite a bind. While the preferred method of distribution was to open up a free town clinic which would inoculate all children under the age of 14 free of charge, the idea went firmly against the American Medical Association (A.M.A.) and the New Jersey Medical Society. Jumbled up in politics and bureaucratic blundering, the medical societies saw any attempt to establish free clinics as socialized [event communist-esque] medicine which would take profits away from private practices across the nation.

By late January, any free clinic in Denville was unlikely. That is not to say that the bind was only felt in the small Morris County township. In fact, all surrounding towns throughout the county and the state were facing the same dilemma. With the medical societies turning their thumbs down, local doctors – who had already purchased their own supplies of vaccines – bluntly refused to lend their services to any proposed Polio clinics. Dr. John Gauer, the Denville Main Street School Physician explained that while families would have to pay for their doctor visits when going for their immunizations [Polio included], as was always the case when being seen in the office, the doctors in town would cover the cost for any family that was unable to afford it. This of course did not solve Mayor Hogan’s issue. Having been sent over one thousand doses from the state, he had to content with the fact that the said medicine came with a short shelf life and expiration date. Compounding the issue was the fat that the township Health Officer, H.L. Hamilton backed Gauer’s stance on the basis that “patients receive a thorough examination before they are inoculated in doctors’ offices, but if they get the vaccine at a clinic it is a mass treatment affair with no time for individual attention.” The town, like its neighbors across the state, was at a stalemate. Across town in Mrs. Jenkins’ fridge, the miracle Polio vaccine sat quietly, each day closer to its expiration date, its own demise, and the potential of hundreds of children being exposed to one of the most terrifying diseases of their time.

As municipal health boards across the state were left in the same position, and thus unable to administer the supplies of vaccine that they had on hand, Denville Mayor John Hogan needed to make an executive decision that would potentially cost him any hope for a re-election bid. The American Medical Association and the New Jersey Medical Society which bound the will of local doctors would come to not like his eventual choice of action. Without a single local doctor participating, Mr. Hogan and the Denville Board of Health went as far as Bedminster, New Jersey to find a doctor willing to administer the vaccine at their Polio clinic which opened on a cold Friday morning, February 3, 1956 at the Denville Main Street School.

“I know we will be criticized by the medical society, but the health of the people is more important than the hierarchy of the A.M.A.,” stated the Mayor the day before the community effort. “We don’t want to be on the spot, if a Polio epidemic should occur, of being reminded that we sent back the vaccine to the state.” Assisted by volunteer nurses from the town – many who gave up their profession to become stay-at-home mothers after World War II – Dr. M.J. Powell of Bedminster, singlehandedly administered 684 Polio vaccine shots. When the Red Cross got wind of the small town’s Mayor’s defiance of the medical societies, they sent in professional nurses who arrived by mid-day to assist in the effort. The doctor would go on to receive a Citizenship Award from the Denville Post 2519, Veterans of Foreign Wars for his actions that day.

Like a story that belongs in Frank Capra’s monumental feel-good holiday movie, “It’s a Wonderful Life,” the clinic – first of its kind in Morris County – spurred on overall change throughout the state. “Congratulations to Denville and their forward-looking Mayor John Hogan for setting up a Salk Polio vaccine clinic,” stated a mail bag letter of February 9, 1956 to the editor of the Denville Herald. Another proclaimed, “When the Polio season starts, Denville will be one town that will be thankful it offered the Salk vaccinee program to its residents.” And another, “Other towns might well take note of this.” Within weeks, the Health Boards of nearby Rockaway, Mountain Lakes and Boonton followed Denville’s lead and opened their own clinics in direct opposition to local doctors and medical societies. An action that potentially saved many children from an unfortunate fate.

According to the Morris County Chapter of the National Foundation for Infantile Paralysis (N.F.I.P.), the 1955 outbreak of Polio was very costly for the county, making a successful rollout of the vaccine that much more important. The local organization spent more than $85,000 of the March of Dimes funds in patient care while assisting 56 families across the county where Polio stuck. The March of Dimes, a nonprofit organization founded by FDR, had a very strong presence in the county since its creation in he late 1930s. Among various national drives, it also organized, sponsored, and encouraged more local fundraisers throughout the country to help raise funds for Polio research and for assistance to those impacted by the disease. In February of 1956, as the Salk Vaccine was being reluctantly distributed across the county, the Morris County Men’s and Women’s Bowling Association held their annual polio tournament conducted by the combined associations throughout the state. And although the vaccine was already created and the potential end to the disease was in sight, the tourney surpassed its high mark of $4,000 set the year prior. Adjusted for inflation, that is equivalent in purchasing power to nearly $39,000 today.

And while some might have found what happened next a big surprise, the citizens of Denville most certainly did not. Following the first round of the vaccinations administered by Dr. Powell, the second round of inoculations scheduled for March of that year was attended and led by all Denville doctors who chose to ignore the A.M.A. This time, as volunteer mothers kept order in the lines of children at the local school, the youngsters were met with friendly faces of their family doctors once volunteer nurses led them to their seats where they received their first or second dose of shots. Perhaps it would be boasting to say that the small town of Denville, the so-called Hub of Morris County, became the beacon of hope for the successful rollout of the Polio vaccine across the county or the state. After all, it was one of the first of its kind.

Perhaps it would be a bit of an exaggeration to give it that much credit. Still, there is no denying that what transpired in the small North New Jersey town could fit into the plot of a Frank Capra’s 1946 classic of redemption and a town coming together for the better good. In Denville, it was a story of one man against a bureaucratic juggernaut. A story of another willing to sacrifice the respect of his fellow professional colleagues by traveling to another town and administering hundreds of vaccines. A story of ultimate redemption of doctors who cared enough for their patients to risk the wrath of their overseeing organizations. And a story of how sometimes a change for the better does not always have to originate with government to succeed.  After all, the narrative of our nation’s history, starts and ends not with not with bureaucracy or politics, but with the people themselves. That and their ability to overcome their differences and work together for the betterment of our communities. As Benjamin Franklin once said, “All mankind is divided into three classes: those that are immovable, those that are movable, and those that move.” For the story of Denville, Morris County as a whole, and the vaccine debacle of 1956, there is no truer proverb.

Peter Zablocki is a local historian and vice-president of the Denville Historical Society. He is also a co-host of a weekly podcast, “History Teachers Talking.”